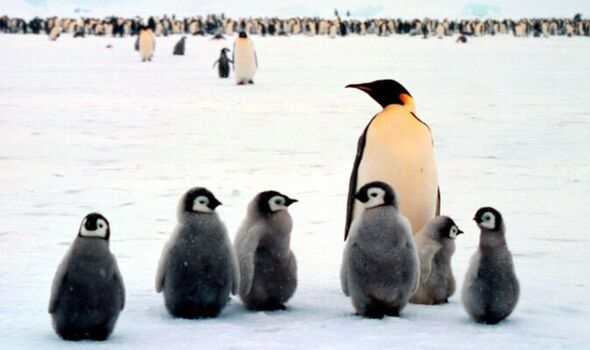 WWF issued the warning to mark World Penguin Day on Monday. The conservation organisation is calling for Emperor penguins to be listed as a Specially Protected Species ahead of the Antarctic Treaty meeting in Berlin next month.

The call comes after a report from the Scientific Committee on Antarctic Research (SCAR) predicted that 80 percent of all known colonies are projected to be quasi-extinct by 2100 under current levels of C02 emissions, while the total number of Emperor penguins could decline by at least 81 percent.

The report warned that in extreme circumstances up to 100 percent of colonies could become quasi-extinct by 2100 and the number of emperor penguins could plummet by at least 99 percent.

In the best-case scenario, their population is likely to decrease by 31 percent by the end of the century.

“They are uniquely adapted to the harsh and extreme Antarctic environment.

“Yet they are also increasingly vulnerable to climate change, habitat loss and human disturbance.

“Only humans can secure the future of this species, as their fate depends on global climate policy combined with an action plan to protect their habitat and remove other risks from human disturbance.

“We need Emperor penguins to be listed as Specially Protected Species at this year’s Antarctic Treaty meeting in order to better shield them against the threat of climate change and to ensure their continued survival.”

Emperor penguins are vulnerable to changes in sea ice such as thinning and reducing in extent.

Their breeding success depends on the sea ice being just right for their needs.

Emperor penguins require stable sea ice which is connected to land for around nine months of the year to mate, incubate their eggs, hatch their chickens and replace their feathers during the annual moult.

Changes to sea ice can lead to breeding failure.

But experts believe that due to rising global temperatures the loss of Antarctic sea ice is now almost certain.

The WWF said listing Emperor penguins as a Specially Protected Species at the Atlantic Treaty meeting will help to avoid any further stressors to the animals by prohibiting any harmful interference and avoiding any detrimental changes.