‘False and malicious’: Tracey Spicer’s lawyer hits back at detractors

The bitter fallout from the Australian MeToo movement has intensified, with a lawyer for leading figure Tracey Spicer accusing detractors of making "false and malicious statements" about her client.

But one woman who received a legal warning from Ms Spicer's lawyer has hit back, saying Ms Spicer is refusing to take responsibility for potentially outing victims to the media. 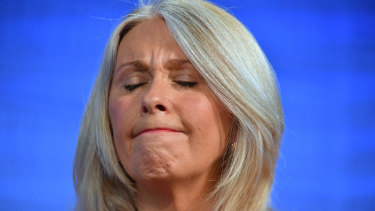 Ms Spicer has stepped back from public appearances in the wake of the growing controversy around women's private disclosures of sexual assault, saying she now intends to heed the advice of medical professionals and prioritise her own mental health.

"For this reason, she is undertaking no further interviews," a spokesperson said.

Earlier this week, it was revealed Ms Spicer's lawyer had flagged defamation concerns with at least three people after a backlash was sparked by Silent No More, the documentary Ms Spicer narrated for the ABC.

Last month, a pre-broadcast version of the three-part series inadvertently revealed the names and faces of domestic abuse and sexual assault survivors without their consent.

Ms Spicer had allowed camera crews to film over her shoulder while she scrolled through her private emails and social media messages. Ms Spicer was inundated with around 1500 disclosures of sexual misconduct after she called on women to send her their stories in the wake of the MeToo movement. The production company failed to blur certain sections before sending embargoed copies of the series to the media.

After an online backlash, Ms Spicer's lawyer Rebekah Giles, who acted for Greens senator Sarah Hanson-Young in her successful defamation action against David Leyonhjelm, said Ms Spicer was entitled to defend herself against "false and malicious statements".

One of the women who was contacted, and who works in the media, says she is distressed because part of her disclosure to Ms Spicer appeared in an early version of Silent No More without her knowledge or consent.

Ms Spicer and Ms Giles both sought to differentiate a "concerns notice" from a legal threat.

A spokesperson for Ms Spicer said: "No one who made a disclosure of sexual abuse and harassment to Tracey has received a concerns notice from Tracey. Nor has any survivor who featured in the documentary."

However the woman who received an email from Ms Spicer's lawyer to her own said she felt the former Network 10 newsreader was being disingenuous. The woman, a journalist, does not wish to be named because she made a disclosure to Ms Spicer in 2017 about a "grub" in the media.

"While that email from Tracey's lawyer may not technically amount to a concerns notice, it was threatening and I was extremely concerned," she said. "It feels like weasel words. For her to be using cynical semantics and legal jargon to spin, minimise, downplay and reframe responsibility tells me she's not sorry and she's learnt absolutely nothing from all of this.

"While I didn't feature in the documentary, a portion of my email to Spicer concerning a man in the media did feature in the preview version circulated to other media without my consent.

"It's very easy for Tracey's supporters to classify what happened as a mere mistake when it wasn't their privacy that was violated. But for those of us that have had our privacy violated, this isn't a slip-up. It's an egregious breach of our trust and safety."

Ms Spicer, the ABC and the production company behind the documentary have all apologised for the privacy blunder. Ms Spicer's critics have said the privacy breach is an example of how the opportunities presented by the MeToo movement have been squandered.

Ms Giles said "healthy debate and discussion" were an important part of society, as was fair and honest opinion.

"But when false and malicious statements are publicly levelled, every single one of us is entitled to attempt to correct the public record," she said. "My client Tracey Spicer did just this through private correspondence outside of the litigation process."

Since 2017, the MeToo movement has encouraged people to share their stories of abuse and harassment and seek help. The social movement has resulted in a number of celebrities, such as disgraced Hollywood film mogul Harvey Weinstein, facing allegations of rape and abuse of power.