Fans gush over pictures of Royals cooking together

Royal fans gush over ‘adorable’ photos of Prince George cooking with the Queen, William and Charles at Buckingham Palace – and say the snap showing four generations is ‘what Christmas is all about’

In the ‘super cute’ set of photos released by the The Windsors as part of the Royal Legion’s ‘Together at Christmas’ initiative, the six-year-old Prince holds a spoon under the watchful eye of his father, grandfather and great-grandmother.

Well-wishers have gushed over the historic photos showing the monarch and three generations of future Kings.

Commenting on the snaps shared on the Kensington Royal Instagram page, fans praised the sweet nature of the image, saying it was ‘what Christmas is about’.

‘How precious!!!’ enthused one, while a second commented; ‘Prince George is making sure Grandpa is doing it correctly, he must be inspired by Mary Berry!’ 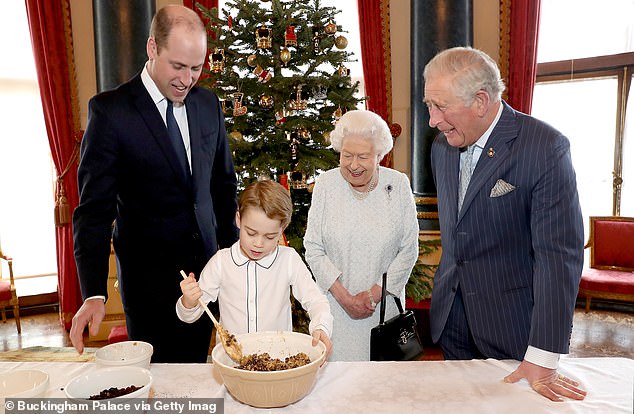 The Queen, the Prince of Wales, Duke of Cambridge and Prince George prepare Christmas puddings in a photograph released by Buckingham Palace

Well-wishers have gushed over the historic photos showing the monarch and three generations of future Kings.

A third added: ‘The Queen and her best legacy,’ while a fourth delighted royal fan commented: ‘Ahh this is so so special! Wonderful memories’.

The picture, taken at Buckingham Palace, has gathered more than 600,000 likes since it was shared on Saturday evening.

The Queen donned a light blue dress designed by Angela Kelly, with a sapphire and diamond brooch, while Prince George wore a pique piped shirt by British designer Rachel Riley.

To the possible relief of his father, the young Prince even managed to keep his white shirt spotlessly clean, despite not wearing an apron or even rolling up his sleeves.

While hundreds of people praised over the family photos, some joked that the Queen still kept hold of her handbag, despite being at home. 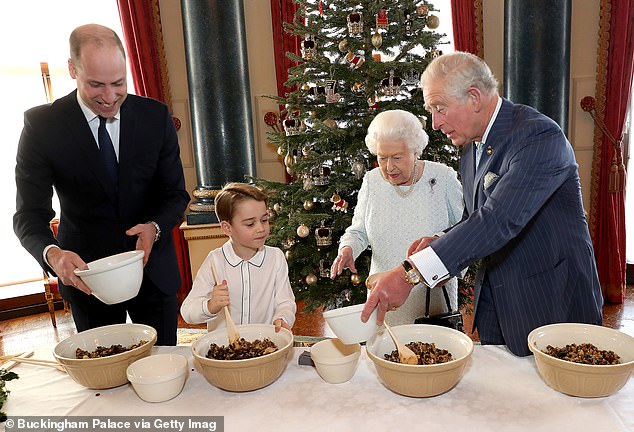 In a second image, the table is filled with four bowls, with all of the generations getting involved with the seasonal baking

The picture, taken at Buckingham Palace, has gathered more than 600,000 likes since it was shared last night

‘The queen couldn’t set her bag down?’ one person joked, while a second commented: ‘At home, preparing food, but The Queen still needs her handbag. What’s in it?’

‘Love that she still has her handbag!’ a third wrote.

The Queen and the three future kings mixed the puddings last week in the magnificent Music Room, one of Buckingham Palace’s 19 State Rooms, and the place where Prince William was christened.

And once the blend was perfect, each royal placed commemorative sixpences into the mixture.

Clips from the cooking session, filmed before the Duke of Edinburgh was rushed to King Edward VII’s Hospital on Friday, were recorded for use in the Christmas message next week. 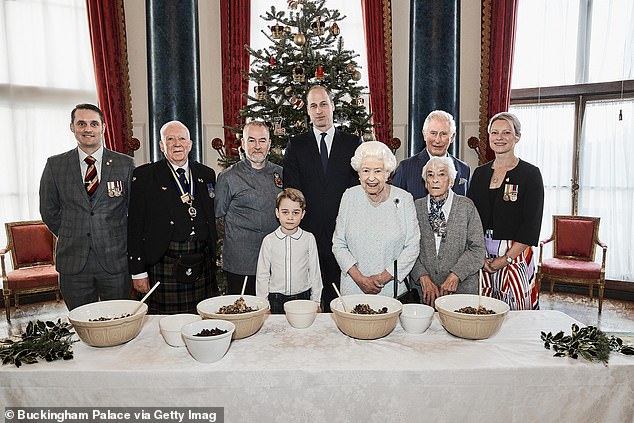 The footage of the family together marks a departure from previous Christmas broadcasts, with the candid scene giving an insight into family life.

Behind them stands a Christmas tree, adorned with regal decorations and baubles, including crowns, corgis, a throne and Scots Guards wearing kilts and bearskin hats.

The puddings will be handed out next year as part of a campaign by the British Royal Legion to tackle loneliness among armed forces veterans.

The charity will serve 99 puddings to mark its 99th year. The mixing session was led by Alex Cavaliere, a former soldier with the Army Catering Corps who now works in one the charity’s six care homes.

Also taking part were veterans Liam Young, 33, a former corporal in the Light Dragoons who trained with Prince Harry and who fought in both Iraq and Afghanistan, and Lisa Evans, 35, a mother-of-two who was in the Royal Logistics Corps and served in Iraq aged just 18.