Federal and state budgets are tracking better than feared but the nation’s taxpayers still face a record level of debt by the middle of the decade and a growing interest bill that will soon eclipse the annual cost of aged care services.

Work compiled by the independent Parliamentary Budget Office into all government budget positions shows stronger revenues and lower spending means the nation’s collective deficits will improve from 8.3 per cent of GDP in 2020-21 to 1.8 per cent by the middle of this decade. 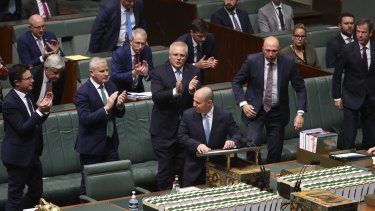 Treasurer Josh Frydenberg delivering this year’s budget. An update later this month is expected to show an improvement but still a large deficit.Credit:Alex Ellinghausen

Federal and state budgets have been derailed by the coronavirus recession. Federal Treasurer Josh Frydenberg oversaw the largest deficit on record, of $134.2 billion, in the 2020-21 financial year. His Victorian counterpart, Tim Pallas, delivered a $17.4 billion deficit while Dominic Perrottet, the then NSW treasurer, delivered a $7.9 billion shortfall.

All three are expecting budget deficits over the coming two years and an increase in their net debt levels.

The budget office said ahead of the recent Delta outbreak, government budgets had been optimistic following the better-than-expected recovery from COVID-19.

Compared to their initial forecasts for the 2020-21 financial year, total government revenues were revised up by $33 billion while spending had been revised down by $18 billion. Despite that improvement, the combined deficits of all governments for the 2021-22 financial year was $171 billion with the federal budget accounting for more than half.

Despite the improvement, net debt is expected to climb from $774 billion last financial year to a record $1.3 trillion or 55 per cent of GDP by 2024-25. Most of that debt will be held by the federal government.

Mr Frydenberg this week said the federal budget was tracking better than had been expected, despite the Delta outbreak across much of the east coast.

He said the government was moving to the next phase of its economic response to the coronavirus, with more focus on tax relief, business incentives and investment in skills.

“Those are the initiatives that we’re putting in place and we are moving the budget to different settings,” he said.

The federal government will update its own budget position on December 16, with it expected to show the deficit to be on track to be well short of the $106 billion forecast in May.

A combination of higher-than-expected company tax receipts, particularly from the iron ore sector, strong superannuation tax collections and lower-than-feared spending on unemployment benefits should see the deficit narrowing towards $75 billion.

The report notes how the states, especially Victoria, will rely heavily on capital spending to support their economies over coming years.

Since the PBO’s last forecast, net state capital investment has been revised upwards by $13 billion with NSW and Victoria accounting for $11 billion of the increase.