Thirty years on, the first Indigenous musical is seeing the light of a brand new day, with a fresh retelling at this year's Sydney Festival.

Bran Nue Dae was written in 1990 and based on the life of Australian composer Jimmy Chi from Broome, Western Australia, in collaboration with his band Knuckles. It's a compelling coming-of-age story that addresses sensitive cultural issues whilst dancing to upbeat 1960s blues and rock tunes.

This year's production is directed by Andrew Ross and tackles hard-hitting Indigenous issues like racism and the Stolen Generation and the incarceration of First Nation people still present today. It stars original cast member, Australian actor and TV presenter Ernie Dingo, who plays the role of Uncle Tadpole he performed for stage and film. 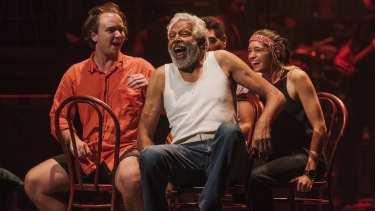 Ernie Dingo and the cast of Bran Nue Dae are putting the final touches on the show ahead of Wednesday’s opening night.Credit:James Brickwood

Associate director Naomi Pigram, who was born in Broome, said she is grateful for the opportunity to bring the idea back to life for a younger generation, while guided by the legacy of her father Stephen Pigram, who toured Knuckles around Australia, and casting her sister Ngaire Pigram as the character Aunty Theresa. 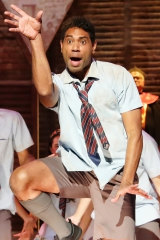 "It is very instinctive, all the stuff I know is from my personal experience and the knowledge of the show. In terms of how I relate and how I got out with the young mob is I am attached to the old and brand new," she said.

The family-filled cast comes together using humour, music and dance to focus on the disconnection felt by Indigenous people and how the troubling themes of displacement are still relevant today.

"It is all about different cultures coming together, he (Jimmy Chi) focused on the human race and people being people, love was a big thing for him… vehicles like this should be [tied] together to become one, despite colour or creed," Ms Pigram said.

Teresa Moore plays the main character's love interest, Rosie, and was originally very nervous to audition for the production due to her father's previous involvement in the original role of Willie, but she was determined to break down the wall of race and cultures.

"I had the determination of getting this show [go]ing again and showing it together for our mob. What happened 30 years ago is still happening today. My purpose is to the tell the story and give it justification to open people's minds and hearts," Ms Moore said.

"I just want people to not have the stereotype in mind, I want to change their perspective on Aboriginal people … what is great about these audiences now is people are open minded and want to learn," she said.

Bran Nue Dae opens on January 15 at the Riverside Theatres in Parramatta, and will run to February 1.