First the sugar tax now there might be a 'calorie tax' on chocolate, cake and biscuits

THE government is being urged to introduce a "calorie tax" on chocolate, cake and biscuits..

Brits who like fizzy drinks have already been hit with higher prices following the sugar tax, but campaigners say it isn't enough to tackle obesity. 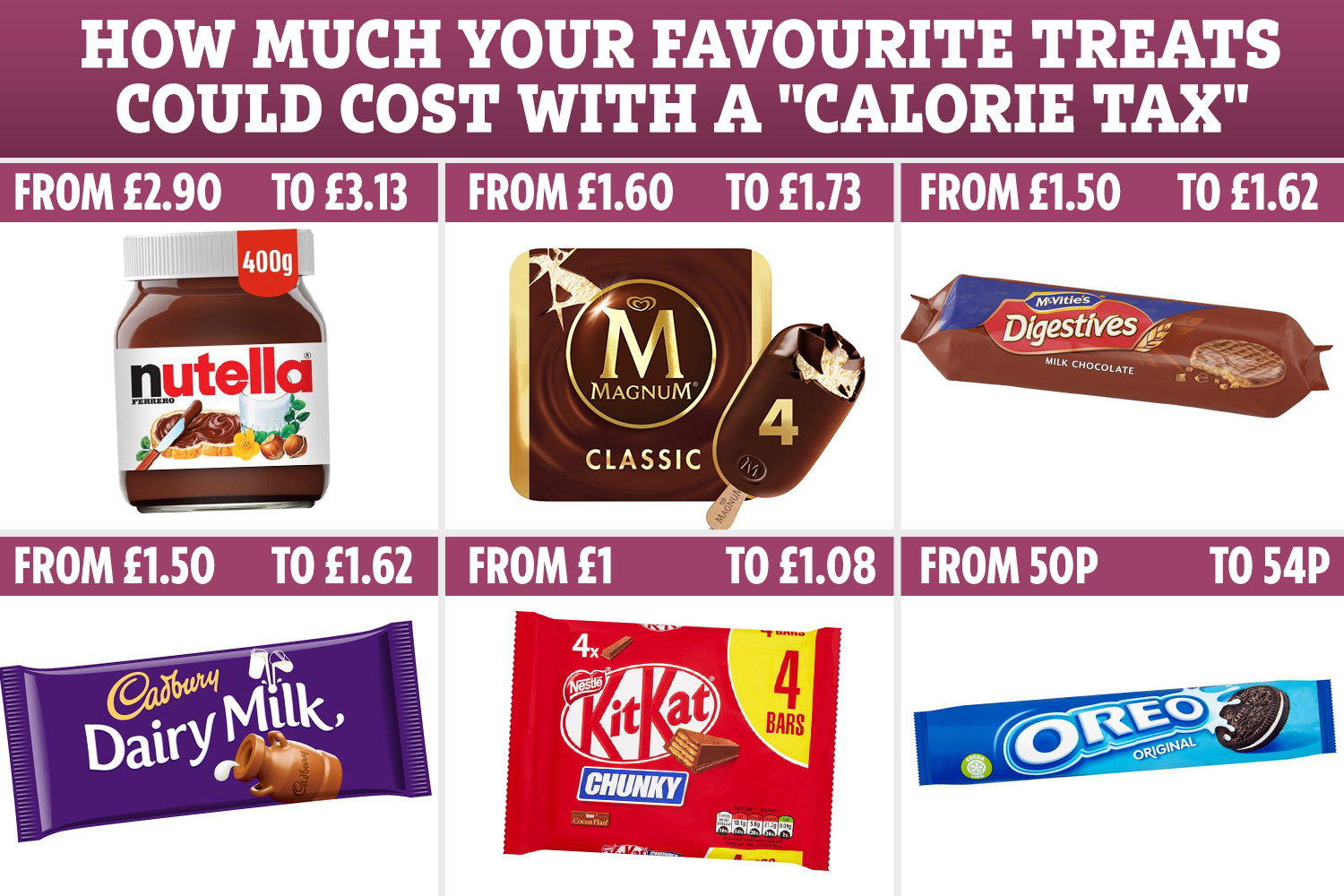 Processed snacks should be limited to how many calories they can have per 100g or manufacturers have to pay extra to sell them, argue Action on Sugar and Action on Salt.

It'd force them to change the recipes, or increase the prices for shoppers.

Fat contributes more to the calories in people's diets than sugar, so manufacturers should reduce both, according to the campaigners.

They suggested the tax could be based on a Mexican model that adds 8 per cent tax if a product has more than 275 calories per 100g.

The estimates are based on today's cheapest price in the big four supermarkets, and assume the tax would be added directly on the shelf price.

It would follow in the footsteps of the sugar tax, which has added up to 24p to the price of a litre of pop if the manufacturer refused to change the recipe.

What is the sugar tax?

HERE'S everything you need to know about the sugar tax.

The sugar tax is a levy put on drinks companies to crack down on high sugar levels in soft drinks.

Companies are now taxed according to the sugar content of their wares.

One is for drinks with a total sugar content of more than 5g per 100ml, while a second, higher levy is imposed on drinks with 8g per 100ml or more.

The sugar tax came into force on April 6, 2018, after hopes of a U-turn by PM Theresa May were dashed.

The tax is estimated to raise around £520million which will be used to fund sports in primary schools.

The government revealed in November 2018 that the sugar tax had raised close to £154million.

Katharine Jenner, of Action on Sugar and Action on Salt, said: "Manufacturers are simply not doing enough.

"If the government is really committed to helping the less well off, they need to tackle the food industry."

Professor Graham MacGregor said: "The sugar tax has been remarkable and unique in that it allows for significant product reformulation by manufacturers in order to avoid paying the levy.

"The same could be achieved in creating a levy to reduce excess calories, but we need a firm commitment from HM Treasury and the Department of Health and Social Care to make this a reality."

Yet the government said there are no plans to introduce a calorie levy on biscuits and chocolate.

But in December, it was reported that it will crack down on calories in ready meals such as pizza and sandwiches.

A spokeswoman for the Department of Health and Social Care said: "There are no plans to introduce a calorie levy.

"We are already reducing exposure to fatty and sugary foods, and are now consulting on further plans to offer clear labelling and more support for individuals to manage their weight."

Shortly before becoming Prime Minister, Boris Johnson said that he may axe the sugar tax.

Meanwhile, Labour plans to extend the sugar tax to milkshakes.

That would drive up the cost of every half-litre bottle by 12p – adding roughly 10 per cent to the current price.