Franklin is more than an environmental documentary, it’s a story of transformation

This gorgeously photographed documentary feature is a tribute to one of Australian environmentalism’s most celebrated victories – the eight-year struggle to save Tasmania’s Franklin River from being dammed for a hydroelectric scheme. 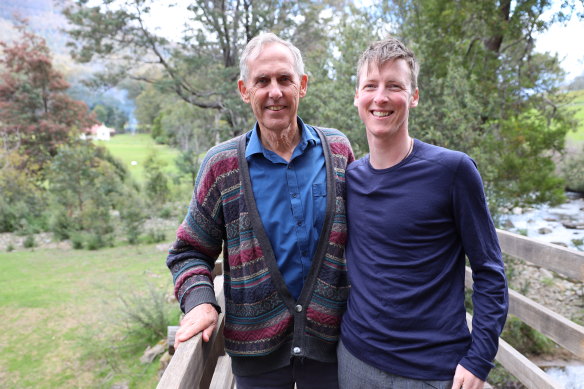 Bob Brown and Oliver Cassidy from the documentary Franklin.Credit:Chris Kamen

The idea for the film was conceived by Oliver Cassidy, whose father, Michael, was one of the Franklin activists – an adventurer whose sense of engagement with the natural world was inherited by his children. It was Michael’s death from bile cancer that inspired Oliver to take on a 14-day rafting trip down the Franklin, re-visiting the stops that were so crucial to the campaign.

It’s this trip that forms the framework for the film. He sets out with his father’s paddle, his campaign diary and an understandable measure of trepidation, knowing the risk of hypothermia is probably the least of his problems.

The film’s director, Kasimir Burgess, intercuts sequences from this journey with 1980s footage of the Franklin blockade, shot by some of the era’s best-known documentary makers. There are news reports, too, along with the reminiscences of Bob Brown and his fellow activists, while Hugo Weaving voices extracts from Michael Cassidy’s diary.

It’s a visual tapestry, stitched together with an intimacy that vividly evokes the sense of camaraderie shared by the campaigners, along with the many discomforts they endured.

“There is not a rock, cave or canyon that I have not seen,” Cassidy wrote, while Indigenous activists talk about the Kutikina Cave and other places that had been acknowledged as UNESCO World Heritage sites by the time the campaign came to an end.

Brown recalls his joy at seeing the Lea Tree for the first time. This was the ancient Huon pine that became a symbol of what the activists were fighting for. When they finally achieved victory, however, a group of pro-dam vandals poured diesel oil into the tree’s trunk and set it on fire.

Oliver begins his trip in a state of euphoria which starts to dissipate as exhaustion sets in. He is frequently drenched and at one stage loses his paddle. After floating alongside the raft, it finally comes to rest in a clump of bushes, where he manages to retrieve it.

For him, the trip is both a tribute to his father and a milestone in his own life.

Transgender, he has recently undergone surgery confirming his transition, and he’s seeing these days and nights on the river as an important rite of passage.

It has its high points. Towards the end, when Oliver knows that he’s going to make it, he arrives at the Lea Tree where he discovers a crop of green sprigs sprouting from its crown.

Franklin is released in cinemas on September 8.