From Jane Fonda to Margaret Atwood, alpha-grans are ruling the roost

As I watched 81-year-old Jane Fonda getting arrested at a climate change rally on Capitol Hill on Friday – the second time in as many weeks, magnificently stylish in her revolutionary-red coat as she was led away by a young policeman – I felt a wave of admiration: the older you get, the more kudos there is in standing up for what you believe in, even if you've been doing it your whole life. There's nothing we like more than a gutsy alpha-gran; from Fonda to Dame Helena Morrissey, 53, one of Britain's most successful businesswomen with a mere nine children and one grandson under her belt, and 71-year-old Hillary Clinton, flirting with the highest office on earth while maintaining a close relationship with daughter Chelsea and looking after her three grandchildren, which she describes as "an absolutely life-changing experience". Senator Elizabeth Warren, running for US president, has three grandchildren. 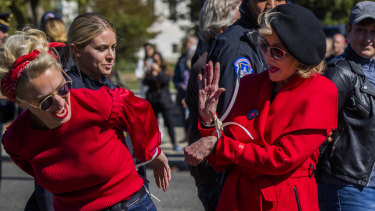 Alpha-gran Jane Fonda (right) high-fives a fellow activist after they were arrested during a rally on Capitol Hill.Credit:AP

These days high-achieving women don't stop their trajectories when they enter the "third age". Granny isn't longing for Red Riding Hood's visit; she's donning her own red outfit and marching out on a protest. Alpha-grans don't consider slowing down, still less (heaven forbid) stopping work – instead, they just add cuddling a grandchild to all their other tasks, glad their earnings allow them to buy stylish baby clothes.

I'll admit that back here in real-world grandmother land, Fonda's protesting exploits left me feeling a little jaded. It's fine for you, I thought, swanning around like a heroine – but I'm at home being an alpha-gran for real. This week we had two of our four grandchildren staying while my daughter and her husband flew off to celebrate their wedding anniversary.

Fonda says she was never very maternal first time around, and celebrated grandmotherhood as "a second chance". But a second chance for what? If you were heavily engaged with career and fame when your own children were young, do you want to give it all up to play with Peppa Pig? Alpha-grans might imagine they will change – but will they? I don't think so. My generation is still "having it all".

That means rising to the top of your game in your third act. And throwing out the old stereotypes while you're at it. Take the model Yasmin Le Bon, who at 54 is far from the clichéd image of a white-haired old lady, peering at her cross-stitch through specs. Early this year, she said: "It sounds stupid, but I didn't want to look like someone's grandma on the runway. But actually, I am someone's grandma, and I am on the runway, so there you go." The supermodel said she wears more miniskirts now than in her twenties. Age has made me similarly resolute in my fashion choices – like all my friends, I wear what I like. Skinny jeans and funky jewellery are my trademarks. And I never wear beige.

Baroness Hale of Richmond's wardrobe recently made headlines, too: the 74-year-old UK Supreme Court judge's bejewelled spider brooch spawned its own Twitter fan account last month, while Margaret Atwood, who was jointly awarded the Booker Prize last week at the age of 79, has also become a cult hit among women of all ages. 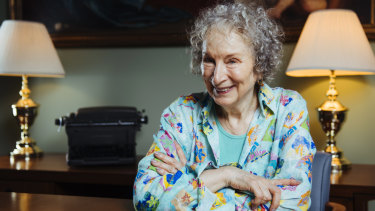 Author Margaret Atwood was named joint winner of the 2019 Booker Prize at the age of 79.Credit:Arthur Mola/Invision/AP

These days, older alpha women go on and on. They won't be slowing down soon. Why should they?

I have a friend in her late sixties, a widowed grandmother to four large lads, who went out recently to buy leathers because her new chap is a biker. "The boys can't quite believe their nan's doing this," she smiled. We've agreed our own grandmothers were very different; at this age, they didn't expect more than domesticity, whereas we want to continue cramming every minute while we can.

What is a real alpha-gran? The women all over the world who have no choice but to raise their grandchildren – who are often exhausted and worried but just get on with it, doing their best with pride and love.