From the ‘Screen of Dreams’ to Antony Green: The best of TV on election night

After what seems like an eternity, the 2022 federal election is mercifully coming to an end this weekend. The campaign trail has taken a toll on us all (especially that 8-year-old Tasmanian kid crash-tackled by the PM), but finally the finish line is in sight.

Before we learn who our next prime minister will be, Australians must pay one final price: sitting through wall-to-wall media coverage on election night. 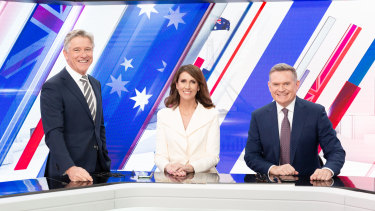 For TV networks, election day is kind of like the Super Bowl, except longer. It’s a chance to wheel out a bunch of semi-familiar faces to talk over one another, show off some newly developed (possibly untested) technology and spend hours picking apart the same point. What a joy!

Either way, if you’re even remotely engaged in this election (and you should be!), then watching how it all unfolds is part of the game.

So, what is each channel offering, and who should get your viewing vote?

Nine is beginning its rolling coverage at 7pm, anchored by Peter Overton and Alicia Loxley, while Nine’s political editor Chris Uhlmann will also be on hand to offer analysis.

As far as bells and whistles go, Nine is going big, dusting off the “decision desk” (it’s like a regular desk but a bit bigger) and putting it to good use. “As the results come into Nine’s Election HQ, we will broadcast them in our virtual tally room,” reads the press release.

Unique selling point: Nine has attracted some heavy hitters to be part of their coverage, including former deputy prime minister Julie Bishop and headline-generator senator Matt Canavan. Former leader of the Labor Party Bill Shorten will also be on Nine and should be able to offer unparalleled insight on what it’s like to lose to the bulldozer, should Scott Morrison be successful.

*Nine is the publisher of this masthead. 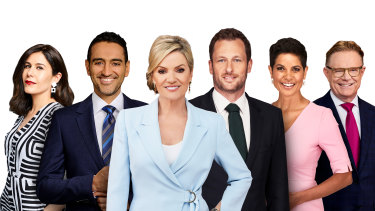 This is definitely a real group photo taken when all of these people were in the same room.

The Americanisation of our political TV coverage has a name, and that name is “Screen of Dreams”. In an Australian television first, Channel Seven will be using the Screen of Dreams, a state-of-the-art, touch-screen technology made famous by CNN’s John King during the dramatic unfolding of the most recent US presidential election. The Screen of Dreams can fast track pre-poll and postal votes, giving viewers an early indication of how the public is leaning. 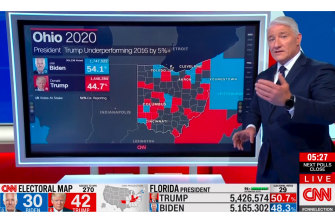 Continuing the theme of dramatic-sounding segments, Seven will also employ “the panic station,” which sounds like the much-anticipated sequel to the 2002 American thriller Panic Room, but is actually just a bunch of experts crunching number to help decipher when seats are won and lost.

Unique selling point: They’ve got guaranteed fireworks with Christopher Pyne and Michaelia Cash on board, while Labor’s breakout star of the campaign Jason Clare is also set to appear.

Who needs a panic station when you have Anton Enus, a man for whom panic does not exist? Enus will anchor the SBS World News coverage from 6:30pm alongside SBS chief political correspondent Anna Henderson. 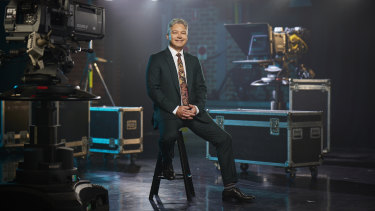 If you’re looking to gorge on political news all day, then Sky News has you covered from 6am with their wonderfully titled Australia Decides: Election Breakfast. However, the real action begins at 5pm, with analysis anchored by Sky News chief news anchor Kieran Gilbert. Gilbert will be joined by Sky regulars, including Peta Credlin, former Labor cabinet minister Graham Richardson and Nationals senate leader Bridget McKenzie. 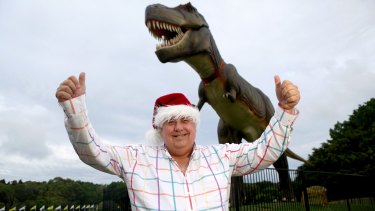 Sky News is the only place to see Clive Palmer (and possibly his dinosaur) on Election Day.Credit:Michelle Smith

Unique selling point: Leader of the United Australia Party Clive Palmer will be appearing exclusively on Sky News to discuss “how his party has performed after its significant spend.” No confirmation yet if he’ll be crossing live from his dinosaur theme park Palmersaurus.

It’s all hands on deck for ABC’s election coverage, which they’ve packaged up under the inspired title, Australia Votes. The primary coverage is from 6pm, and it’s the ultimate Ultimo lineup with Leigh Sales, Annabel Crabb, and Antony Green all getting involved while David Speers anchors the action. 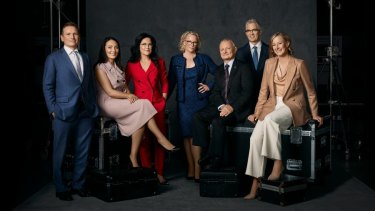 ABC Avengers assemble! ABC Throughout the day the ABC team will offer rolling news coverage from around Australia.

Labor’s Tanya Plibersek and Liberal senator Simon Birmingham bring the political street cred. Greg Jennett and Patricia Karvelas will provide real-time vibe checks from both the Liberal and Labor camps at their respective Sydney functions throughout the evening.

Unique selling point: This election Vote Compass has been a popular ABC tool (influencer Abbie Chatfield has consistently instructed followers to use the application). Vote Compass presenter Bridget Brennan will be on hand to deliver election-themed Compass updates.