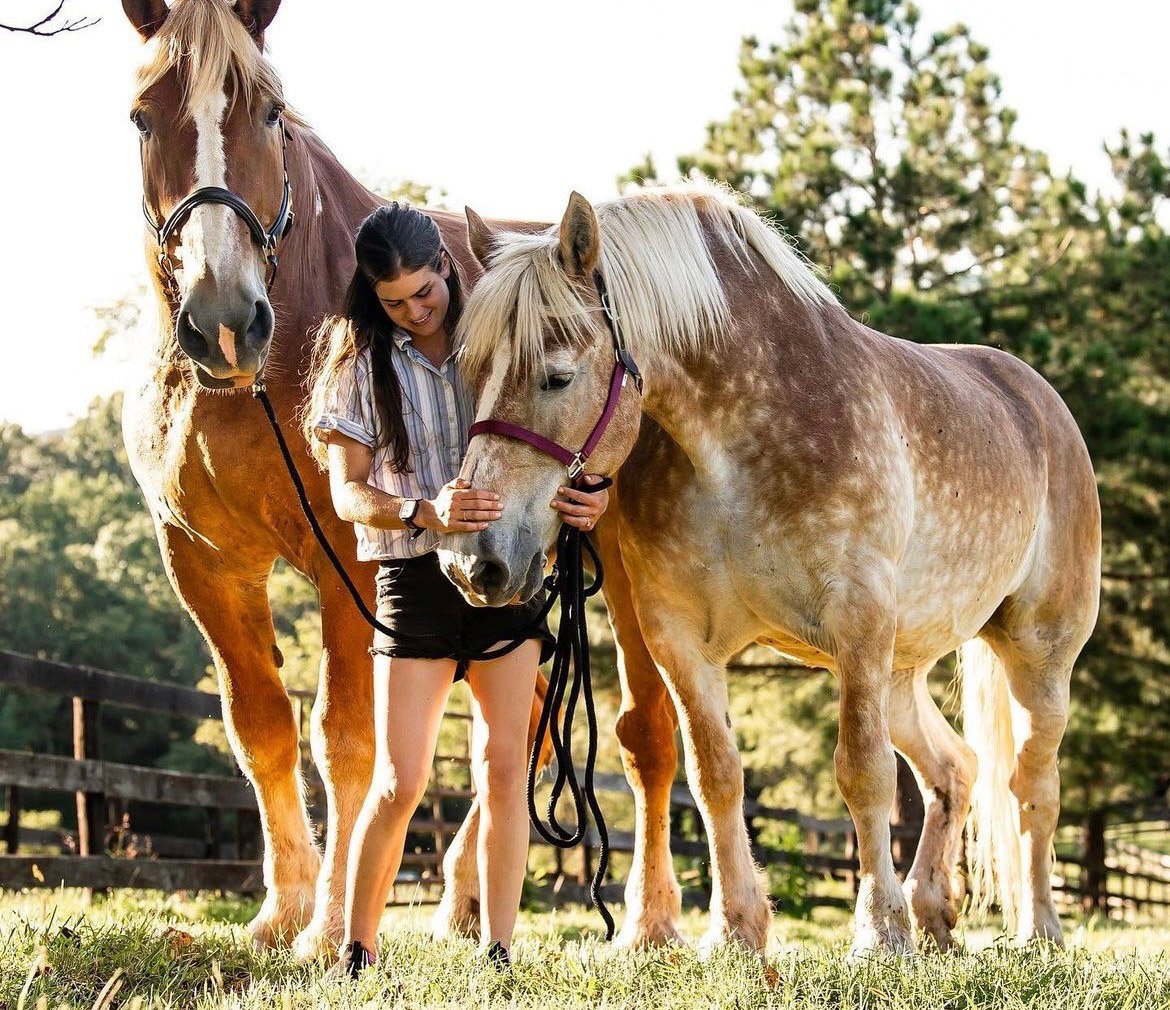 Two retired horses have struck up an unlikely friendship – despite their height differences – and are described by their owner as a ‘super cute old married couple’.

When 7ft Big John, a 24-year-old Belgian Draft gelding, was put into the same field as 20-year-old Stardust, also a Belgian, the pair struck up an instant bond.

The two elderly horses are now so close, you never see one without the other.

Their owner, Ally Smith, 29, a horse trainer said: ‘They are very attached for two very senior horses – they don’t go anywhere without each other.

‘It is super sweet to see, they didn’t have any kind of connection to any other horses when they first got here, and now you can’t take one without the other.’

Big John is an abnormally large for a horse of his breed, standing at 7ft tall and weighing more than 214st.

Ally from Charlottesville, Virginia, US, said that before meeting Stardust, Big John was somewhat of a recluse.

She said: ‘Big John had not connected to any horse we had here, he kept himself to himself.

‘One day he took a fancy to Stardust, and we thought “why don’t we try letting them meet?”

‘Now they are inseparable – they are like a super cute old married couple.

‘They have been together for about a year now, they never spend any time apart, they really love each other, it is super sweet.’

Before being rescued, Big John was used as workhorse and would help plough fields. After his owners were done with him, Big John was sent to an auction where he was bought by Ally.

‘His breed naturally is very large, but he is exceptionally large for a Belgian, they are not supposed to be that big.

‘He was well sought after at auction because he can carry very large loads.

Belgian horses like Big John typically reach a height of 16 hands and weigh between 2,100lbs and 2,300lbs.

Meanwhile, Stardust is the average size of a Belgian, weighing in 1,400lbs.

Ally explained: ‘Stardust was a carriage horse and when she couldn’t pull the carriage anymore, she was sent to auction.

‘The kill buyer bought her to be sent to slaughter – but we rescued her.’

Ally runs Colby’s Crew Rescue which was established in 2021 and has saved around 300 horses from slaughter.

Every year, thousands of horses are sent to Mexico and Canada to be slaughtered for human consumption in Europe and Asia.

Currently, the rescue houses around 80 horses at four to five different farms, including an equine sanctuary that looks after 30 of them.

Ally said that she and the team rescue around 20 horses each month.

She said: ‘The horses go into the kill pen and a kill buyer goes to all the auctions across the country and buys the cheap horses, bringing them all into a holding sport where they are weighed and get sent to the slaughterhouse, to be killed.

‘The slaughterhouse then comes and picks the horses up and ships them to Mexico or Canada – we get to the pen and save them before they go to slaughter.’

Ally said it is ‘super heartwarming’ to see how Big John and Stardust have bonded.

She said: ‘We put so much time and effort into rescuing and one of the best parts is seeing these retired horses relax and enjoy life.’