A woman divided opinion when she revealed she installed a tiny hidden camera in her fridge after suspecting her flatmate of stealing her food.

The 20-year-old British woman took to Reddit to explain she shares a house with three other women and wanted to find out who was responsible for her food and drink constantly going missing.

Calling it ‘unbelievably frustrating’, she explained how she had installed a ‘fridge camera’ and caught the culprit red-handed.

However when she confronted the thief she was shocked to be told she was in the wrong for invading her privacy.

Reddit users were divided as to who was in the wrong, with some saying the ends justified the means because the woman did find the culprit. However others claimed the woman was fundamentally wrong to record her flatmates without their permission, regardless of the reason for doing so. 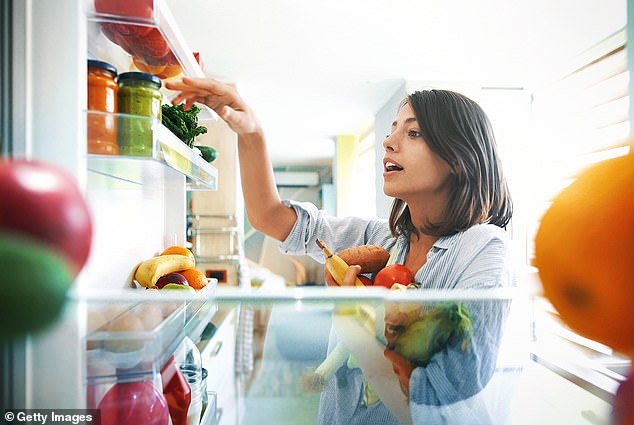 The 20-year-old British woman took to Reddit to explain she shares a house with three other women and wanted to find out who was responsible for her food and drink constantly going missing. Stock image 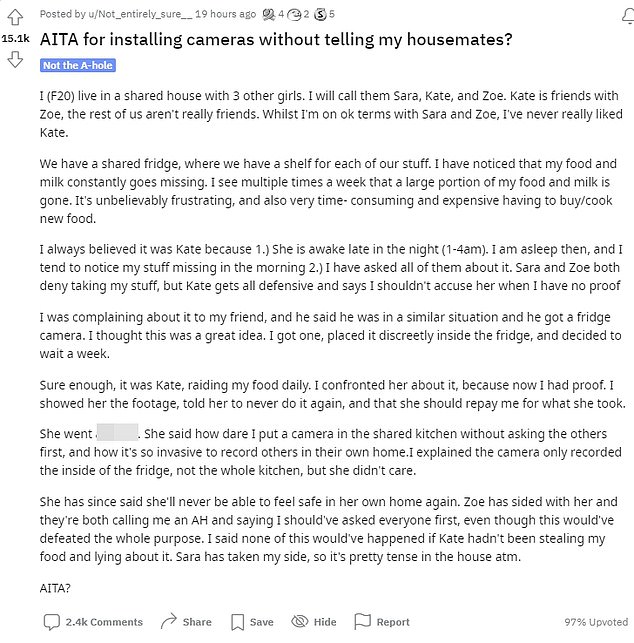 The young woman explained the living dynamics to the Reddit community, in that she is sharing the house with three other girls, two of which are good friends with one another, but the rest aren’t too close. The anonymous user gives the girls pseudonyms, Sara, Kate, and Zoe

The woman explained: ‘We have a shared fridge, where we have a shelf for each of our stuff. I have noticed that my food and milk constantly goes missing.

‘I see multiple times a week that a large portion of my food and milk is gone. It’s unbelievably frustrating, and also very time- consuming and expensive having to buy/cook new food.

‘I always believed it was Kate [fake name] because 1.) She is awake late in the night (1-4am). I am asleep then, and I tend to notice my stuff missing in the morning 2.) I have asked all of them about it. Sara and Zoe both deny taking my stuff, but Kate gets all defensive and says I shouldn’t accuse her when I have no proof.

‘I was complaining about it to my friend, and he said he was in a similar situation and he got a fridge camera. I thought this was a great idea. I got one, placed it discreetly inside the fridge, and decided to wait a week. 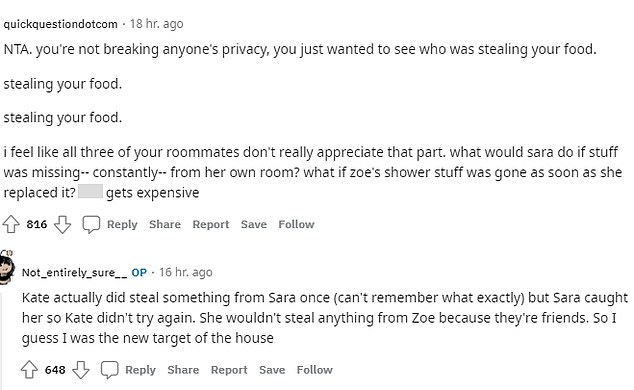 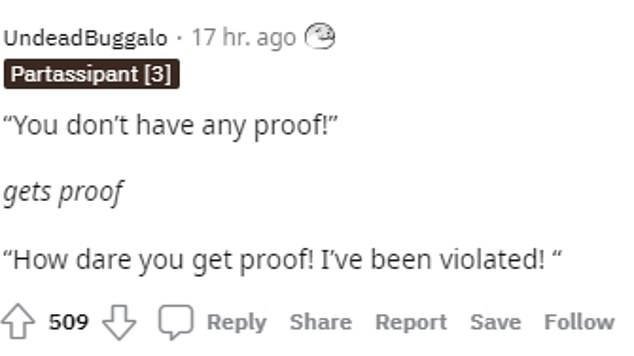 Is it illegal to film your flatmate without their consent?

In the United Kingdom there are no laws forbidding photography of private property from a public place.

Civil proceeding can be taken if a person is filmed without consent, and privacy laws exist to protect a person where they can expect privacy.

Persistent and aggressive photography of a single individual may come under the legal definition of harassment.

‘Sure enough, it was Kate, raiding my food daily. I confronted her about it, because now I had proof. I showed her the footage, told her to never do it again, and that she should repay me for what she took.

‘She went ape***t. She said how dare I put a camera in the shared kitchen without asking the others first, and how it’s so invasive to record others in their own home.

‘I explained the camera only recorded the inside of the fridge, not the whole kitchen, but she didn’t care.

‘She has since said she’ll never be able to feel safe in her own home again. Zoe has sided with her and they’re both calling me an a*****e and saying I should’ve asked everyone first, even though this would’ve defeated the whole purpose. I said none of this would’ve happened if Kate hadn’t been stealing my food and lying about it. Sara has taken my side, so it’s pretty tense in the house atm.’

Reddit users were divided in opinion with the tense situation for the 20-year-old woman who asked the community for their advice.

Many were stunned that she had installed a camera, but others said the housemate was to blame for stealing her food.

Some users also pointed out that there was no malintent by placing the secret camera inside the fridge, all she wanted to do was see who was stealing the food because it was costing her money to constantly replace it.

Impossible_Gazelle27 cited a quote from the 20-year-old woman in the sticky situation which read, ‘She has since said she’ll never be able to feel safe in her own home again,’ responding with: ‘I wouldn’t feel safe living in a home with a thief either.’

But some argue that everyone is the a**hole in this situation.

K-no-B said: ‘The majority is badly wrong on this one. Don’t set up hidden camera inside someone’s home. Zoe has every right to be furious, and OP owes her a big apology. It’s absolutely a violation.

‘But OP doesn’t get to unilaterally violate everyone’s privacy just because one roommate is an a**hole. Clear ESH [everyone sucks here].’