Days after the Morrison government unveiled plans for a new fleet of nuclear-powered submarines, the Greens will announce on Saturday that Mr Mitchem is its candidate for Kooyong – the seat in Melbourne’s affluent, leafy eastern suburbs held by the federal Treasurer. 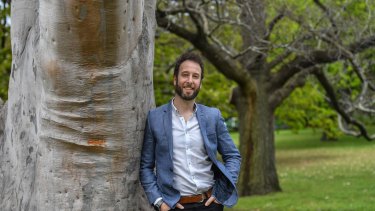 The Greens have picked employment lawyer Piers Mitchem as their candidate for Kooyong.Credit:Joe Armao

Mr Mitchem, an employment lawyer with corporate law firm Thomson Geer, was born and raised in Melbourne’s inner east, attending Trinity Grammar in Kew where he teamed up with his classmates to invite Nelson Mandela to come to Australia and speak at World Reconciliation Day.

He studied art and law at the University of Melbourne and recently graduated from King’s College in London with a master’s degree focussed on non-proliferation and disarmament as well as the risks associated with emerging nuclear weapons technologies.

Speaking to The Age ahead of the Greens announcement, Mr Mitchem described the Morrison government’s decision to purchase a new fleet of nuclear submarines as “a deeply, deeply worrying announcement” that could have profound implications for nuclear proliferation globally.

“The risk is that other countries, who have much stronger incentives to build nuclear weapons than Australia does, would rely on this precedent as a pretext for developing their own nuclear capabilities,” he told The Age. 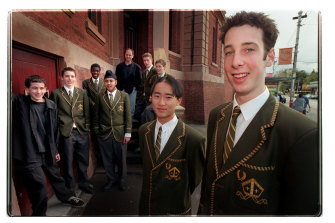 Trinity Grammar students including Piers Mitcham, right, were instrumental in getting Nelson Mandela to visit Australia in 2000. Credit:Eamon Gallagher

“These submarines are likely to run on highly enriched uranium [HEU] – the same grade of uranium used in nuclear weapons – which would shatter a decades-long practice of non-nuclear states refraining from using HEU for military activities.

“Many Australians would also rightly be concerned at the prospect of these nuclear reactors floating in the harbours of their capital cities at any given time.”

Mirroring the party’s election strategy in the neighbouring seat of Higgins, the Greens will try and convince the well-heeled voters of Kooyong, which includes the suburbs of Hawthorn, Kew, Balwyn, Canterbury and Camberwell, that the Morrison government is beholden to the National Party, particularly on climate policies.

The Greens campaign is expected to focus on the return of Barnaby Joyce as the minor party tries to convince more progressive Liberal Party supporters voters to reject the Coalition. 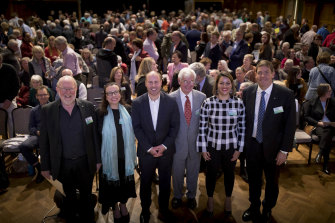 In a direct attack on Mr Frydenberg as Treasurer, the Greens will also campaign on JobKeeper payments paid to big businesses during the pandemic which Mr Mitchem described as “one of the most unforgivable policy failures in the history of this country”.

“While billions in JobKeeper payments went to corporations that didn’t need it and who will never be required to pay it back, countless small businesses had to close their doors permanently,” he said.

The Liberal Party has held the seat of Kooyong at every election since it was created, with prominent conservative leaders Sir Robert Menzies and Andrew Peacock representing the electorate in Canberra.

In recent years the blue-ribbon seat has emerged as a political target for the Greens, Labor and independent candidates who targeted the electorate in 2019 when the Liberals were forced to spend more than $1 million on its campaign to shore up the heartland electorate.

Mr Mitchem’s selection comes just weeks after the Greens former Kooyong candidate Julian Burnside, a prominent human rights barrister, told the party he would stand aside despite securing more than 20 per cent of the primary vote at the 2019 poll.

Mr Burnside’s decision to quit as the Greens candidate followed a wave of criticism for a controversial tweet equating Israel’s treatment of the Palestinians to Nazi Germany, which prompted a fierce backlash from the Jewish community.

Greens leader Adam Bandt accused Mr Frydenberg, who suffered a sizeable swing at the 2019 election, of failing to deliver on climate change promises made during the last election.

“If you vote Liberal, you get Barnaby. If you’re in Kooyong and want climate action, this time vote Greens. It’s the only way the government will get the message,” Mr Bandt said.

Labor is expected to endorse Peter Lynch as its candidate for the seat.