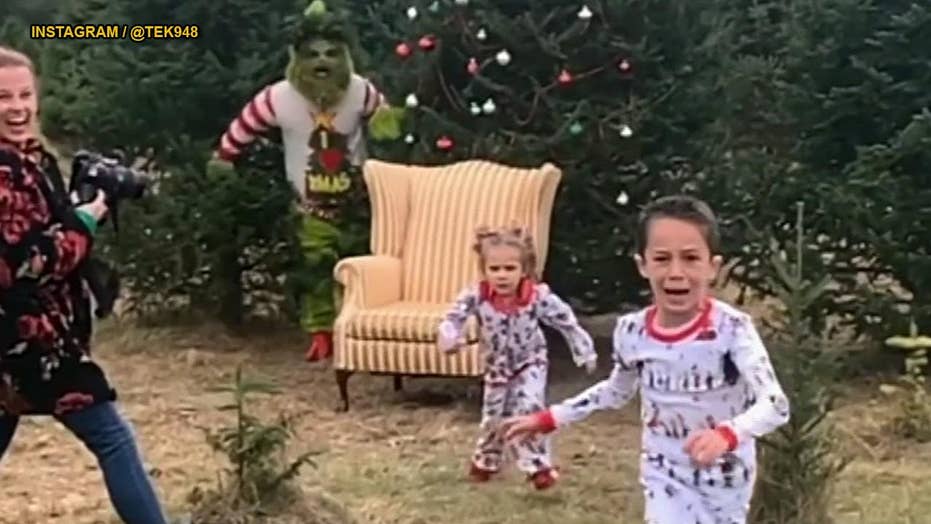 A New Jersey mom, Ashley Bohl, shared a hilarious video on Instagram of her children being scared silly by a prankster dressed as the Grinch. In the video, Bohl’s two children are sitting in a large chair where the kids were getting their pictures taken. Eventually, a prankster dressed as the Grinch comes out from behind a tree to pose with the youngsters, causing the Bohls’ son to take off running and crying, followed close behind by his sister.

A New Jersey mom took her kids to meet the Grinch last weekend, but much like the Whos down in Whoville, they were not super excited to meet him.

Ashley Bohl shared a video on Instagram of her two children sitting in a large chair in front of a decorated Christmas tree in Atco, N.J., where the kids — who were dressed in matching pajamas — were getting their pictures taken by a photographer.

During the photo session, a prankster dressed as the Grinch comes out from behind the tree to pose with the youngsters.

However, the giant green guest — who was wearing an uncharacteristic “I (heart) Christmas” sweater — seemed too much for the two to handle, and Bohl's son takes off running and crying, followed close behind by his sister.

According to Bohl, her kids had actually been looking forward to meeting the Grinch.

“My kids couldn't wait to meet the Grinch this weekend! I'd say it went well,” the mom joked in her caption on Instagram.

Fortunately, all seemed to have ended well. Bohl posted an update on Instagram showing a smiling, happy family posing with a silly Grinch behind them.