Guillaume Brahimi is one of Australia’s most celebrated chefs, as well as TV presenter and author. His new show, Guillaume’s Paris, sees him return to the city of his birth to explore the greatest in French food. 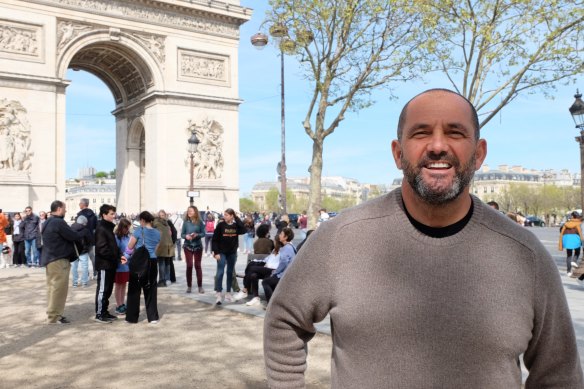 I’m no expert on French food – do you find Australians generally have a lot to learn about the cuisine of your homeland?
I think we all have to learn, you have to discover, travel and see it. But I think there is some synergy between what’s happening in France and what’s happening in Australia. We are eating more seasonal produce in Australia, we are going to farmers’ markets, something we didn’t do before. And restaurants in Australia are getting better and better.

It feels like Australia still doesn’t have a food identity of its own, as opposed to somewhere like France – which has the strongest food identity you could imagine.
Yeah, I get that, there is a big opening for a debate on that. But I think we are such a young country: we are, as Australian consumers, so lucky because we eat the best of Chinese food, the best of Asian food, the best of Italian, Greek, French – you know what I mean? I think that’s the Australian cuisine.

So it’s the melting pot.
It’s a melting pot of great talent and real authentic talent. And I think what’s Australian is a way of dining – when you dine in Australia the service is relaxed, but not casual. We know how to serve guests, and we know how to cook, but we’re doing it in a very Australian way.

Is that different to the European way of serving food?
I think we’re less formal in Australia. But that doesn’t mean we’re not as professional.

Your show is focused on Paris. Is it right to say that in terms of cuisine, Paris has its own particular style compared to other regions of France?
Well, Paris is the capital of France, so we’re happy to pick everything we like from France and bring it to the capital. The great thing in Paris is you can have some amazing Asian food and you can have traditional French food from different areas of France.

Tell me something about food in Paris that will surprise me.
I think how amazing are the artisans in Paris, and how much they excel in what they do. It doesn’t matter if you make a croissant, a baguette, a cheese, a coffee – they’re really at the top of their game. And they’re not doing it for the camera: they’re doing it every day.

You’re what people call a celebrity chef – are you comfortable with being called that?
Please … I just said that to my kids and they put me straight back on my spot. Gordon Ramsay is a celebrity – I’m just lucky. I spent my time in the kitchen and I love cooking, and I’m so lucky, I get to travel to the city where I was born and showcase it to the world. For me, it’s a privilege, it’s an honour. I don’t take it for granted whatsoever.

For someone who is planning a trip to Paris, what would you recommend, to ensure their palate is fully satisfied?
Well, there is a great show coming out called Guillaume’s Paris, and I couldn’t recommend it highly enough for you, to base your trip around this show! But seriously … don’t eat 20 croissants in the morning, you’ve got a long day ahead. It’s all about balance. Pick some arrondisements that you want to go to, and don’t try to do too much in one day because you’ll be overwhelmed. Take the time to seek out a Parisian cafe with a nice glass of chablis, and just observe, you know? Go in a park, in the Luxembourg, sit on a chair, open a book. Paris is very special, but you need to embrace the moment, don’t rush rush rush. Look at the monuments, look at the architecture, my goodness, who built that?

It feels like a beautifully French way of looking at life.
Oh yeah, but you’ll see a hundred Parisians looking at you saying, what are you daydreaming, hurry up, I’m missing my bus. I’m just saying the ideal. Go to the market and just walk, buy a punnet of fruit, eat the fruit while you walk the market. Buy a baguette and a piece of cheese, and sit on the bench and say, is that what it’s all about? Why have I been waiting so long?

Do you find people have a lot of misconceptions about your country?
I heard that Parisians are quite arrogant and all that – I think it’s a misinterpretation. I think France is such a special country – La Republique, liberte, egalite, fraternite, that’s pretty special.

Guillaume’s Paris is on SBS Food, from Thursday, September 22, 7.30pm