Gwynnie: The more we laugh, the richer she gets

This month may go down in history as the one in which Donald Trump was impeached. Or it may be remembered as the week in which actress and hawker of New-Age wares Gwyneth Paltrow released a candle entitled: "This Smells Like My Vagina." In the first rough draft of history stakes, they currently appear neck and neck, Paltrow's burning bush possibly having the edge.

GP, as she likes to be referred to by her acolytes, also announced Goop at Sea (what next? Goop on Ice?), a cruising version of her sell-out wellness weekends, promising not only an audience with Paltrow herself, but "cutting-edge doctors, practitioners and thought leaders", plus sundry "goopy perks", as part of life on the ocean wave. 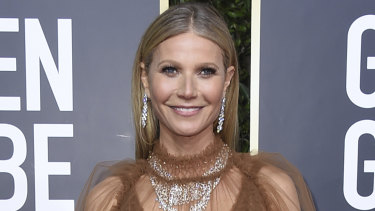 Gwyneth Paltrow, a dab hand at monetising our nether regions.Credit:AP

And on Friday, her new Netflix series, The Goop Lab, premieres, billed as "a curiosity-driven exploration of boundary-pushing wellness topics". The advertisements for this show our heroine clad in plush pink, standing inside a series of labial shapes with the exhortation: "Reach new depths."

One might rather say, "sink to new lows", but this is precisely the reaction GP is cashing in on, and laughing all the way to the bank. The candle is already sold out – thus a collectors' item – although readers can avail themselves of a waiting list at shop.goop.com. Arome de Paltrow does not come cheap: on sale for $US75 ($109), plus postage and packaging, it promises "a funny, gorgeous, sexy and beautifully unexpected scent … made with geranium, citrusy bergamot, and cedar absolutes juxtaposed with Damask rose and ambrette seed to put us in mind of fantasy, seduction and a sophisticated warmth."

It is said to have evolved out of a joke between Paltrow and perfumer Douglas Little. Quoth Goop, "the two were working on a fragrance, and [Paltrow] blurted out, 'Uhhh … this smells like a vagina'." And, lo, a legend was born.

Alas, I have not sampled said candle, but I know a woman who has. Cindy Gallop, founder and CEO of video-sharing platform MakeLoveNotPorn, tells me: "I love, love, love that Gwyneth Paltrow did this – both because it displays a sense of humour, and because we cannot have too many women bringing our sexuality into the mainstream."

Hey, you aren't one to let facts get in the way of profiting from snake oil.

And the scent? "It smells like a bundle of roses wrapped in suede," notes Gallop, "the platonic ideal of Gwyneth Paltrow's vagina. To be honest, it doesn't smell like anyone's vagina would in the real world, which is why, obviously, it's not meant to be taken seriously.

"But I love the smell, I love the fact that Gwyneth did this, and I love that I get to display a candle saying: 'This smells like my vagina' in my bedroom, between the copulating figurines I bought in the Shanghai antiques market. I'll be using it when I have company there, and when I don't."

Paltrow, as ever, is on the money, zeitgeist-wise. Come February, Orion will be republishing Catherine Blackledge's 2003 bestseller, The Story of V, as Raising the Skirt: the Unsung Power of the Vagina, celebrating the beauty and power of the female genitalia, and reclaiming anasyrma, the age-old vagina-revealing gesture, as the ideal 21st-century protest.

She's not only in on the joke, the joke's on us. Think of it as her greatest acting role to date.

In 2018, Goop was fined nearly $211,000 under California's civil penalties laws for making "unsubstantiated" claims that jade vaginal eggs ($94 a pop) could, once inserted, "cultivate sexual energy, clear chi pathways in the body, intensify femininity, and invigorate our life force". Neither would they balance hormones, prevent uterine prolapse and increase bladder control, much as this was a nice idea.

Gynaecologist Dr Jennifer Gunter became internet-famous by making it her mission to call Paltrow out on such matters, in an open letter declaring egg-gate "the biggest load of garbage I have read on your site since vaginal steaming … But, hey, you aren't one to let facts get in the way of profiting from snake oil."

And so this prediction came to pass. For Paltrow remained head of a near $377 million lifestyle brand, a site with 1.98 million total visits, and a podcast with more than 18 million listeners (figures which will only have improved since), while Gunter has profited from the controversy with global exposure and her own bestselling book, The Vagina Bible. (Nutrient) drinks all round!

When GP engages in intimate flashing, it is exhibitionism as clickbait. Although she prefers the description "cultural firestorm", as Taffy Brodesser-Akner's New York Times Magazine profile revealed she told a Harvard business class. Such firestorms draw traffic to her site, Paltrow explained, at which point: "I can monetise those eyeballs." When her Harvard audience responded with stunned silence, she "cupped her hands around her mouth and yelled, 'VAGINA! VAGINA! VAGINA!' as if she were yodelling," which seemed rather to undermine her point.

Having seen the sainted Gwyneth in action at the first British "In Goop Health" summit last summer (with tickets up to $8,500), I can attest to how knowing all this saleable eccentricity feels. Think: self-satirising signposts promising a "Facial-cupping collective" and "Leaky-gut support group"; plus assertions that "community is the new vitamin C" and that we need to "build awareness around the positivity of negativity".

Much of the stuff Paltrow advocates is plain old common sense dressed up in fancier pants: be it "conscious uncoupling" (not being a d— when divorcing), Living Apart Together (couples not necessarily cohabiting full time), or the fabled "self-care" (baths are unquestionably brilliant). But it's the woo-woo that brings in the wonga. She needs the vagina-brandishing to liven things up. Otherwise it's all just so many placebo powders. I've seen the first couple of episodes of The Goop Lab and they are ploddingly dull. Frankly, I could have done with more below-the-belt action.

Paltrow knows that her purported flakiness makes millions. The more we laugh at her, the richer she gets. She's not only in on the joke, the joke's on us. Think of it as her greatest acting role to date: credulous New-Age nutjob disguising bona fide commercial genius. Well might the woman have won an Oscar.

The Goop Lab launches on Netflix on Friday January 24