Most put this down to bad blood from the referendum: the self-described ‘Bad Boys of Brexit’ clashed throughout 2016 with former Vote Leave boss-turned- No 10-enforcer Dominic Cummings. But I can reveal a murkier reason behind the rebuke.

Some new Cabinet Ministers joining Boris Johnson’s Government in July were warned by security officials to steer clear of insurance tycoon Banks and his associates. 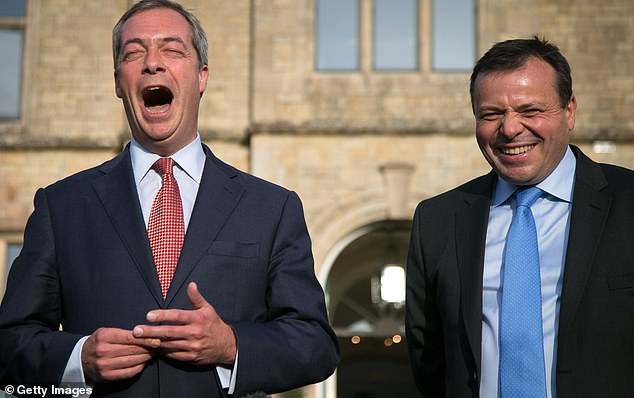 It came amid an ongoing probe by the National Crime Agency into his business dealings which centre on allegations about his African diamond mine and alleged Moscow connections – claims Banks has denied.

On Friday, the Met dropped charges against Farage and Banks’s unruly Leave.EU campaign despite it being found to have broken electoral law.

But the NCA, dubbed Britain’s FBI, tells me its far more serious investigation is ‘still live’ – and sources say its scope has widened.

A security mole whispers: ‘Some new Ministers were close to Banks and had shared a stage with Farage.

They were gently told they risked huge embarrassment if charges are brought and they were still meeting regularly.’

Brexit seems to be able to drive even the most mild-mannered people round the bend – including Irish music mogul Louis Walsh.

When some merry British tourists pulled up alongside his Mercedes SUV at traffic lights in Dublin on Friday and serenaded the former X Factor judge with a song, he shouted back: ‘Like Ireland? No Brexit!’ 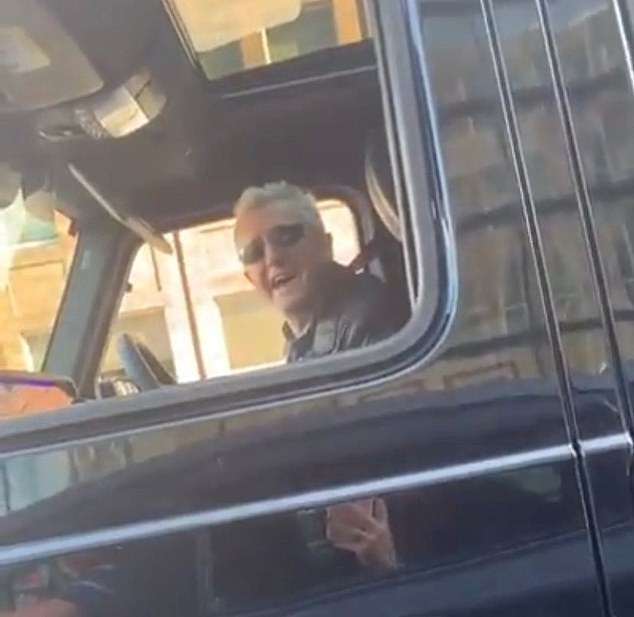 X Factor judge Louis Walsh yelled ‘Like Ireland? No Brexit!’ from his Mercedes SUV on Friday

Devout Brexit-ultra John Redwood suffers for his cause. I hear the Wokingham MP politely turned down French Evian water at a Westminster dinner recently, asking the waiter if there was any British mineral water instead.

When told No, he had to settle for tap. He couldn’t wash down his curry with any of that ghastly foreign muck…

Senior mandarins at the Foreign Office are openly scathing about George Osborne’s naive declaration in 2015 of a ‘golden era’ of relations with China.

Amid fears of Huawei spying on the West, Whitehall officials are forced to unplug conference-call phones made by the Chinese tech giant every time they want to have a discreet conversation.

Now the former Chancellor’s sucking-up has been dubbed ‘the golden error’. 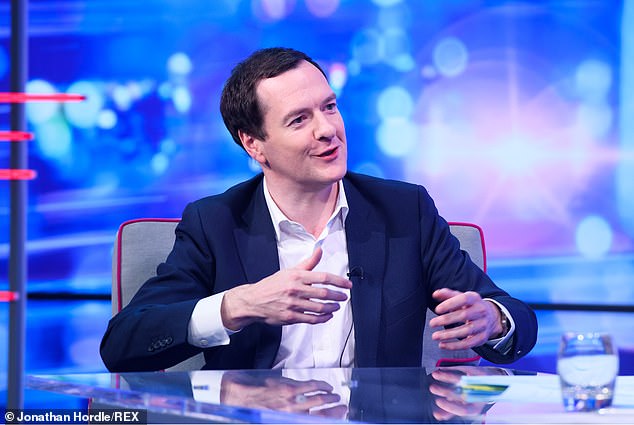 Which prominent member of Jeremy Corbyn’s frontbench team is using expensive lawyers Carter-Ruck to try to suppress a negative story about their adult offspring?

I’m reminded of what Labour’s Deputy Leader Tom Watson said a few months ago about ‘using expensive media lawyers in an attempt to silence’ being ‘as futile as it is stupid. It’s not the Labour way and I deplore it.’

Oddball Rory Stewart is not missed in Whitehall, according to a mole in the former Aid Secretary’s private office. ‘He once asked a press officer to brush his hair for him,’ the source moaned.

Thrusting Cabinet Secretary Sir Mark Sedwill has not given up on his goal of becoming our next man in Washington, and is getting increasingly agitated that he’s yet to get the nod.

And there is more bad news for the double-jobbing Whitehall chief: I hear an attempt to bring him down a peg by stripping him of his dual role as National Security Adviser is imminent.

Why didn’t Ruth Davidson get a gong in Theresa May’s resignation honours?

Given that even the Downing Street cleaning lady got a medal, the Scots Tory leader – who kept the former PM in power after her 2017 Election disaster by winning a dozen seats north of the border – was widely tipped for a damehood.

But I hear Mrs May was still smarting from a brutal text message sent by Davidson during her last week as PM, begging her as one faithful party servant to another to throw in the towel and quit.

Tea-room gossip that lubricious Sir Alan Duncan fancied a tilt at replacing John Bercow as Commons Speaker may, sadly, be wide of the mark.

‘Total tosh,’ he tells me. ‘Although I would be better dressed. More decorum. And much more polite at chairing.’ Sounds like a manifesto…