Haunting studies in memory and decay

Colourful geometric prints featuring autumnal tones; photographs detailing the brown and grey grit and grime of an abandoned and ransacked building. At first glance, these two groups of works appear worlds apart, but take a closer look and they are inextricably linked.

Together they make up Simryn Gill’s current exhibition at Utopia Art Sydney, Passing Through. Talking in her Sydney studio in advance of the exhibition Gill makes it clear that rather than being quoted herself, she prefers the works speak for themselves. The artist sees her role as questioner, denying that she has any answers. So we talk about the works in Passing Through, which seem to ask: how do we make records of place and time? 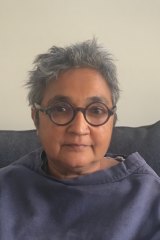 Simryn Gill sees her role as a questioner rather than a provider of answers.

The prints were made by applying ink to the mosaic-tiled floor of the same crumbling building depicted in Gill’s photographs, before pressing the paper down to transfer the colour. This process was repeated several times for each work, resulting in a number of concentric rectangles – each unique composition guided by the scale of the paper, the size of the tiles and the artist’s on-the-spot experimentation with the colours of etching inks used. For Gill, choosing colour combinations is akin to the writing process – the tone of a composition can completely shift depending on which word or colour is selected next.

The building, an old motel by the sea in Gill’s second home of Malaysia, has been stripped of all salvageable materials. It is now open to the elements including the tropical light the artist describes as having a yellow quality, distinct from Australia’s white sunlight. The choice of colours seems to reflect this warmth, with tones of mustard, maroon and orange interspersed with deep blues and browns.

The intense colours and hard-edged geometry of these prints contrast with the crumbly textures and patina of age in the photographs. However, the compositional connections are clear, as Gill directs the viewer's eye through a series of open doorways. The scale at which Gill chose to print the photos was guided by the size of the prints, some of which are slightly misregistered allowing for slivers of white paper to appear between the concentric rectangles, echoing the shafts of light visible in the corridors in the photographs. 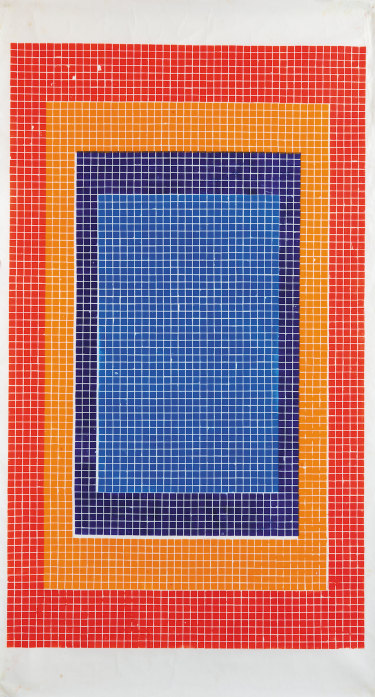 The colours in the geometric prints are carefully considered.

One work shows a wall of dirty tiles with a scrubbed white section bringing to mind advertising for cleaning products. In another, dense forest is visible beyond a stained tiled wall, with branches and vines cutting across the foreground. A battle between mother nature and human nature has taken place, and it is unclear who the victor is.

Working out of a makeshift "bush" studio in the boot of a car, Gill first made the prints then took the photographs, all the while hoping it wouldn’t rain and hoping no one would appear to ask her what she was doing in an abandoned motel. (Artists must always have a few excuses up their sleeve to explain their presence in unexpected places.)

Gill’s work, including prints, photography and installations, has been exhibited widely since the early 1990s, including representing Australia at the 55th Venice Biennale in 2013 and in recent museum shows in Belgium and Sweden. Her 2007-09 photographic series My Own Private Angkor currently hangs in The Met Breuer, New York as a new acquisition. Not one to rest on these laurels, she is busy examining test prints, posing questions, and proposing ways of seeing and remembering.