HENRY DEEDES: Tremendous, Queen… but you Nay-dough delinquents gotta shape up! Donald Trump’s Goodfellas verdict on Nato schmucks who don’t cough up – before his royal love-in

Earplugs in, snowflakes! Diplomatic corps on high alert! Donald Trump rolled into town for this week’s 70th anniversary Nato summit and his lengthy motorcade was, as ever, closely trailed by the strong whiff of cordite.

Yesterday morning, he was supposed to be delivering what the event’s organisers call ‘opening remarks’ alongside Nato general secretary Jens Stoltenberg.

A brief twiddle of the cufflinks and some gracious, low-level back-slapping for the cameras is the order of the day. Clearly, El Presidente did not get the memo.

Instead, he treated us to 40-odd minutes of strutting braggadocio and schoolboy score settling, a combination of Jose Mourinho and Joe Pesci’s wise guy mobster from Goodfellas. 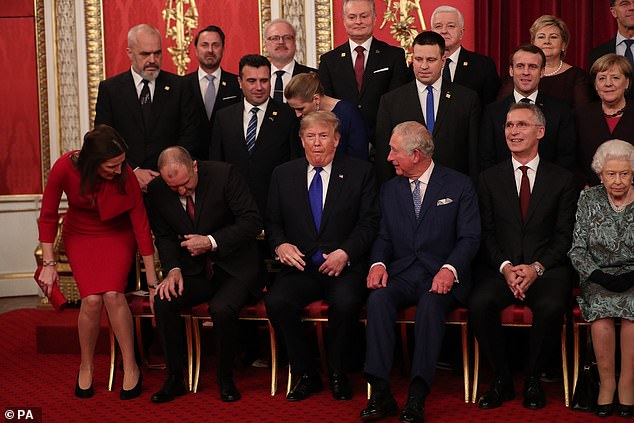 Donald Trump sat down with other nations leaders at Buckingham Palace on Tuesday evening to celebrate the 70th anniversary of the NATO alliance. He is pictured next to Prince Charles, right, and the Queen is on the far right, with German chancellor Angela Merkel and French president Emmanuel Macron behind her 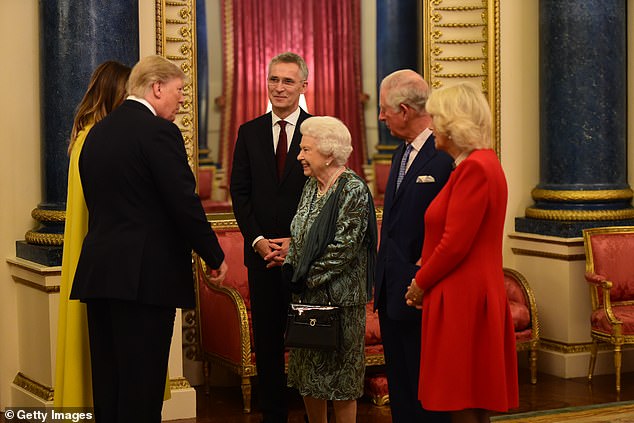 He was pictured greeting Her Majesty with his wife Melania, who was standing with Prince Charles and Camilla

Diplomatic? God no! Bonkers? Maybe a little. Entertaining? Oh, you betcha! By the end, I was scribbling so hard to capture it all, my biro had run dry.

At Winfield House, the US ambassador’s sumptuous London residence in Regent’s Park, Trump and Stoltenberg, a gawky arm flapper with a thick Nor-veegian accent, were seated on a pair of gorgeous looking Louis XVI-style fauteuils.

Trump didn’t appear to think much of them, darting derisory glances at his as though someone had made him perch on an upturned slop bucket. Couldn’t possibly compete with those gold thrones Melania got for Mar-a-Lago. Somebody brought up French president Emmanuel Macron’s recent description of Nato as suffering from ‘brain death’. The Prez shook his head.

Anyway, added the President, little Macron should ‘shuddup’ because his economy wasn’t doing so well. Ah, the old ‘not as rich as me’ Donald gut-punch. 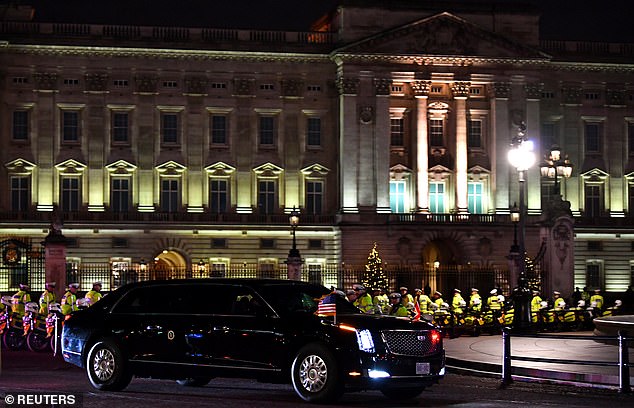 He had further gripes about members of ‘Nay-dough’ which weren’t contributing their fair share to their defence budgets – ‘I call them delinquents’.

As for the European Union, those schmucks in Brussels they were screwing him big time with their trade tariffs – ‘They gotta shape up’. He was particularly cross to learn about a French digital tax targeting the likes of Facebook and Amazon. 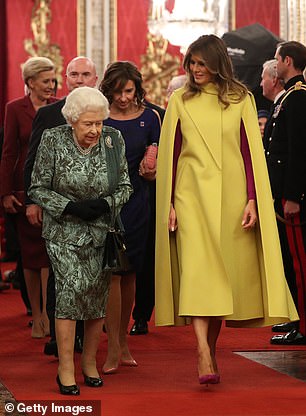 ‘Those are American companies,’ barked the Prez. ‘If anyone’s going to take advantage of them it’s us!’

Stoltenberg sat mildly horrified, struggling to get a word in edgeways. The Donald didn’t pay him much regard. Almost certainly took him for a loser. Sorta guy who probably never dated a supermodel in his life. Probably doesn’t even own his own plane.

Trump declined the chance to be drawn on the British election. ‘I don’t wanna complicate it,’ he drawled insouciantly. ‘I won a lotta elections for a lotta people.’

He mentioned two recent US governor races where the Republican candidates got huge lifts in the polls after he’d endorsed them. But they still lost. Presumably because they were losers.

The President did venture his support for Brexit. He claimed to have predicted that we’d leave the day before the referendum while talking to reporters at one of his Scottish golf courses.

Strangely, no evidence of these remarks seem to exist. 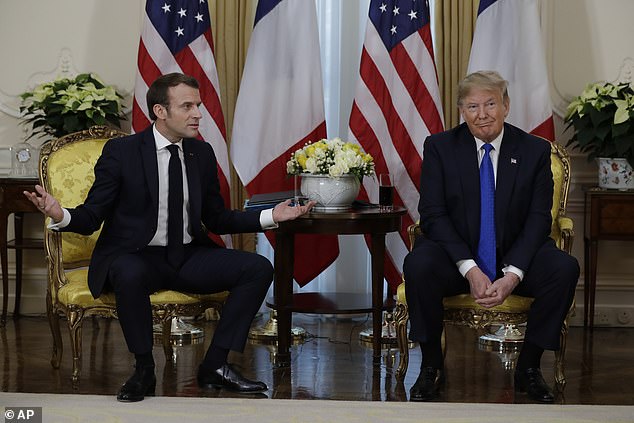 Earlier in the day Trump had a press conference with French president Emmanuel Macron at the US Ambassador’s sumptuous London residence, Winfield house. The pair managed to shake hands 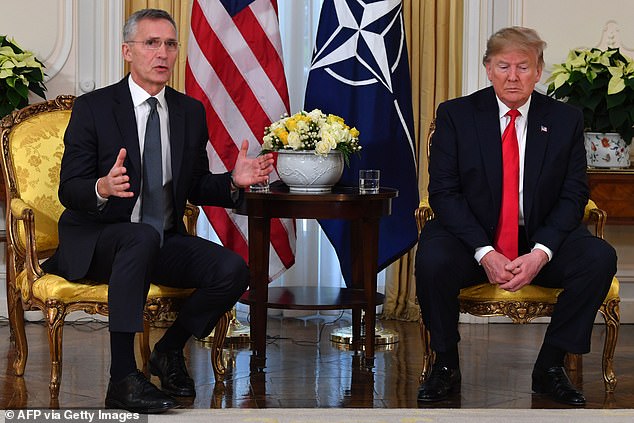 Mind you, that was the same day he’d have claimed to have shot a five under par, hit two holes in one and broken the course record for the longest drive with just a two iron, had anybody asked. Suddenly, he seemed to change his mind on the election. ‘I’ll stay out of it, but Boris is very capable and I think he will do a good job,’ he nodded.

Just not as good a job as the Prez was doing, presumably.

Oh and contrary to Labour’s whining, he wasn’t the least bit interested in buying the NHS. Not even if it was presented to him on a silver platter. Thanks to him, US healthcare was way, way superior.

Could he work with Jeremy Corbyn? ‘Shuurrrre, I can work with anyone,’ the President shrugged (Fun fact: More than 50 of Trump’s senior staff have departed the White House since his administration began.) Later, he added: ‘I know nothing about the gentleman, Jeremy Corbyn, nothing about him.’ Translation: ‘Loser. Hooooooge loser.’ 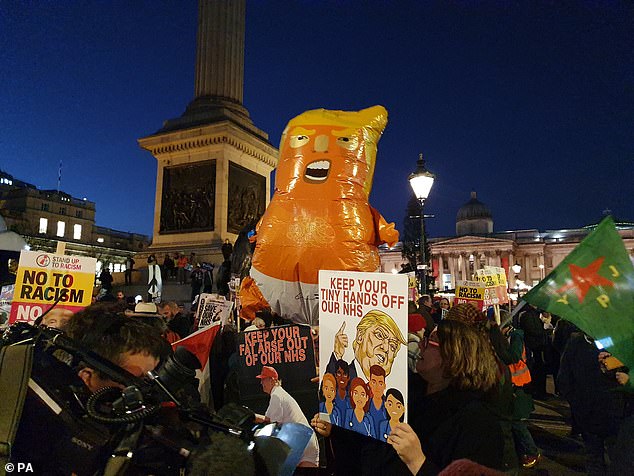 Protesters brandishing a Trump-shaped balloon, Kurdish flag and placards took to Trafalgar Square on Tuesday evening to protest against the American president

You sensed Trump would have rather been back in Washington hanging out in the West Wing.

It seemed he felt that this gathering was beneath him. Small time. Full of losers. Hopefully his mood was boosted by his trip to Buckingham Palace last night to meet the Queen, who was hosting a ‘Nay-dough’ reception.