‘Her lips were white and her feet turned blue’: Mother recalls horrifying moment she found three-year-old daughter choking in bathtub on toy – before hero neighbor saved her life

A mom has recalled the horrifying moment her three-year-old daughter began choking to death on a toy and had to be saved by their hero neighbor in a bid to raise awareness to fellow parents.

Leah Porritt, 42, a special education behavior specialist from Baltimore, found her then three-year-old daughter Maddie in the bathtub with her lips turning ‘white’ and unable to breathe in October 2017.

Realizing she was choking, Leah grabbed Maddie and tried everything she could to get whatever was stuck in her daughter’s throat out, however, nothing was working.

In sheer panic, Leah placed Maddie face down over her arm and ran outside screaming for help, which is when her neighbor, who had first aid and CPR experience, came to the rescue. 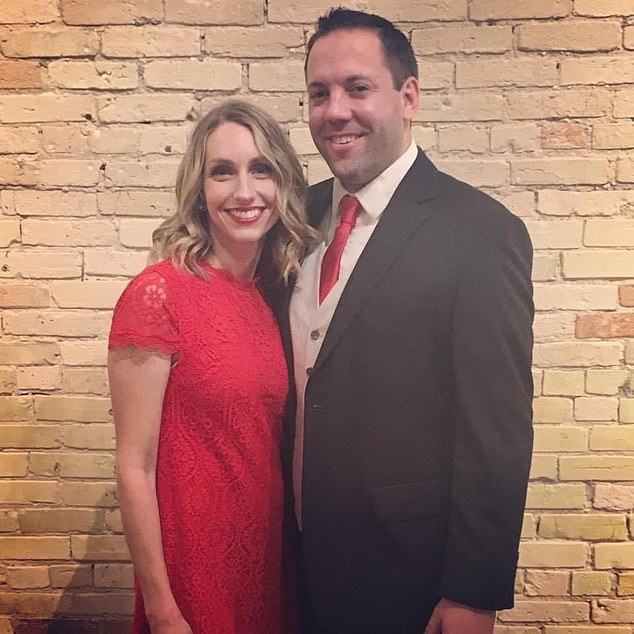 Leah Porritt (pictured here with husband Kenny), 42, found her then three-year-old daughter Maddie in the bathtub with her lips turning blue and unable to breathe in October 2017 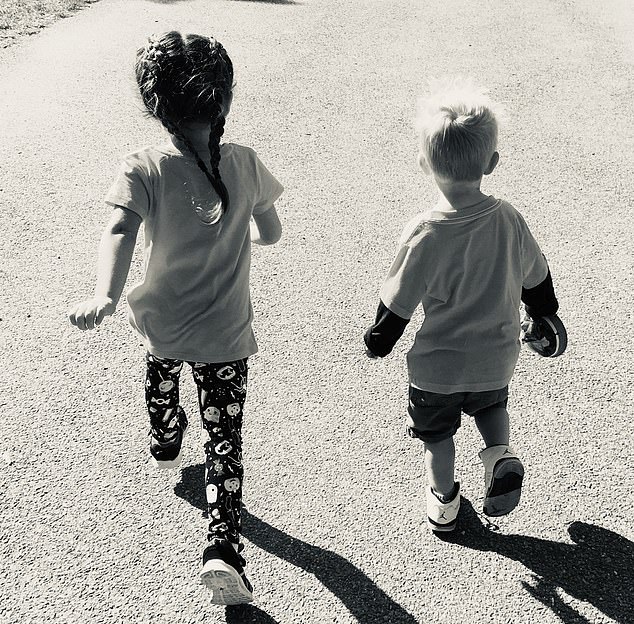 Maddie, seen here with younger brother Cameron, almost choked to death on a toy while playing in the bath

‘I thought I was going to lose her – her lips turned white and her feet and fingers turned blue,’ Leah told NeedToKnow.online.

‘I knew I was losing her. It was terrifying and the most helpless feeling I’ve ever experienced.

‘My husband, Kenny, wasn’t at home and I had just drained the tub from giving Maddie and her brother, Cameron, now aged seven, a bath.

‘While Maddie was in the drained tub, cleaning up the toys, I was dressing her brother in the bedroom across the hallway, listening to her sing while she cleaned up. 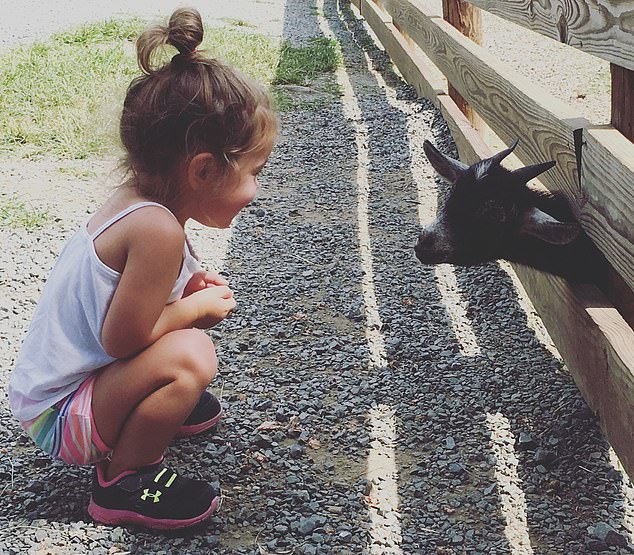 After dislodging the toy, paramedics came to assess Maddie and make sure she was okay 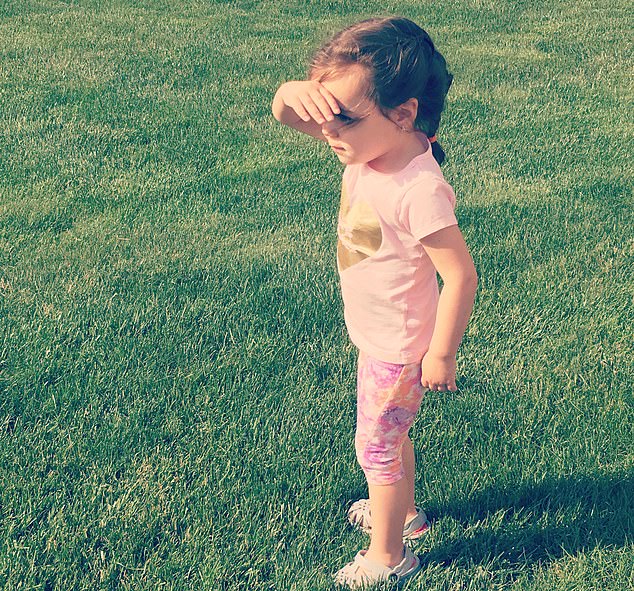 After being given the all-clear, the family took Maddie (pictured) to bed

HOW TO HELP A CHOKING CHILD

Have someone call 911 while you try the steps listed below, as recommended by medical experts at Stanford Medical children’s department.

This person can keep 911 informed of progress and have an ambulance on the way if you are not successful at dislodging the obstruction.

‘Suddenly I didn’t hear her anymore and when I yelled her name, she didn’t respond.

‘I ran into the bathroom and she was looking at me from the tub with her mouth open and arms extended, fear on her face.

‘I attempted to sweep her mouth out but didn’t feel anything, I picked her up and pounded on her back but nothing. I could see her panic and her lips were blue.

‘I realized that I had no idea what to do for my choking child, I didn’t know what she was choking on and how to help her.’

Leah raced to her neighbor’s house, who thankfully had first aid and CPR experience.

‘She must have heard me screaming because she was opening the door as I got there,’ the mom said.

‘She grabbed my daughter from me, whose feet were blue as I passed her over.

‘With one hard hit on the back, the toy flew out of her mouth. I have never been so relieved in my life.’

After dislodging the toy, paramedics came to Leah’s house to assess Maddie and make sure she was okay.

After being given the all-clear, the family took both Maddie and her brother to bed.

‘I did not sleep that night. I kept replaying the moment in my mind and then eventually in my dreams whenever I dozed off,’ Leah said.

Although Maddie was able to get help, mom Leah was left feeling helpless for days after the incident.

After realizing she nearly lost her daughter, the mom-of-two made it her mission to get first aid training – and to spread the message to other parents.

‘I walked around in a daze for a few days. I could not get my mind off of how close I was to losing her,’ Leah said. 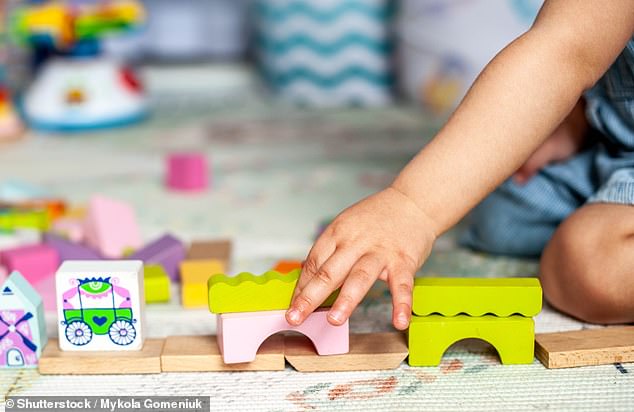 Leah says that ‘no matter how vigilant you are as a parent, things happen’ 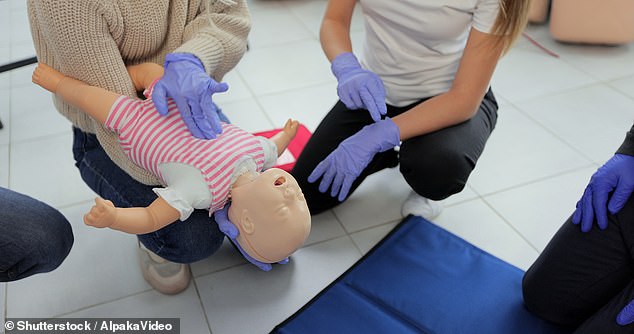 After realizing she nearly lost her daughter, the mom-of-two made it her mission to get first aid training – and to spread the message to other parents

‘The next morning I went online and signed up for the first aid and CPR class I could find.

‘After I was trained, I recruited my local fire department to come to the school I was working in at the time and trained both my colleagues and many of the parents of my students.

‘Choking can be both prevented and helped, the toy my daughter choked on was not a bathtub toy.

‘I can only guess that she was likely pretending to drink water from a cup in the tub as she was cleaning up and perhaps it slid into her mouth by accident.

‘I didn’t even know it was in the tub, no matter how vigilant you are as a parent, things happen.

‘Children can choke on food while you are sitting next to them at the dinner table. All parents should know how to help. 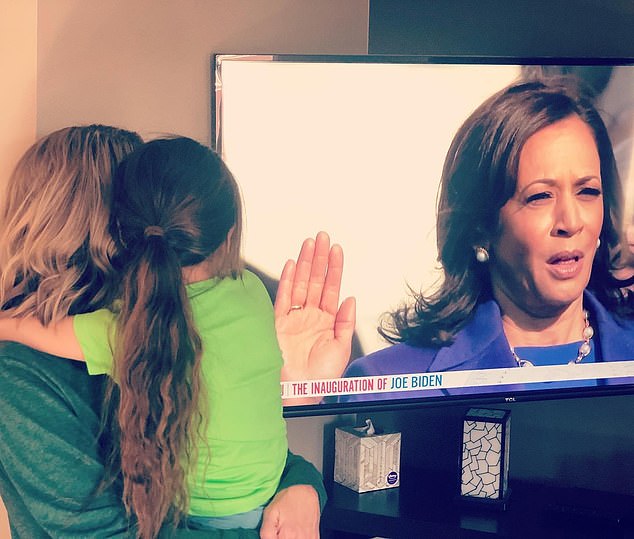 After Leah was trained in CPR, she recruited her local fire department to come to the school she was working in at the time to train both her colleagues and parents 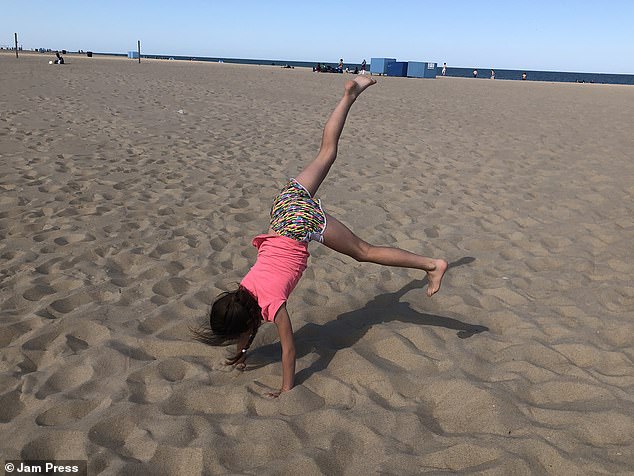 Five years on from the incident and Leah says Maddie, who is now eight, is doing ‘amazing’

‘I have had to use it [first aid training] several times, once for my youngest when he got a bean caught in his throat as I was sitting right next to me, as well as at my job.

‘It is still terrifying, but I know what to do and how to best help someone who is choking.’

Five years on from the incident and Leah says Maddie, who is now eight, is doing ‘amazing.’

‘While I don’t think about the incident from when she was three as much anymore, sometimes my mind does go back to it.

‘I just thank god that it turned out the way it did and that I have been given this chance to raise such a special girl.’

If you enjoyed reading this article…

Thrifty bride reveals she saved $15,000 on her wedding day by growing her own flowers on her parents’ farm in Ontario

Antiques Roadshow guest is shocked after learning her husband’s collection of original design sketches of the Teletubbies is worth £80,000

The orphaned wildcat cub who saved my life: British soldier who moved to the Amazon ‘with a plan to die’ reveals how raising an ocelot helped him heal from PTSD in tear-jerking new film