Hey Hey, are we seriously doing this again?

Despite being swept up in a recent racism scandal, Hey Hey It’s Saturday is returning to our screens for a one-off reunion episode. The long-running (and twice-cancelled) variety show will celebrate its 50th anniversary in a TV special led by original host Daryl Somers. 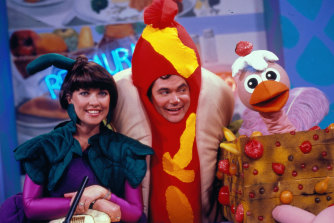 No, it’s Monday.
Yes, I realise that, but I figured you were making a joke.

A joke about what?
Hey Hey It’s Saturday.

No, it’s Monday.
I’m not doing this with you.

Fine. Why are people talking about Hey Hey It’s Saturday. Is it 1985 again?
No. It’s because the rumoured reunion finally got the green light yesterday. The Seven Network confirmed Hey Hey We’re 50, a one-off episode that celebrates the show’s 50th anniversary will air on Channel Seven and 7plus later in the year.

Right. OK. So ‘old show decides to cash in with a reunion episode.’ Hardly earth-shattering in today’s TV climate?
Yes, but Hey Hey was in the news for all the wrong reasons recently. Back in March, host Daryl Somers noted how politically correct comedy had become, telling The Daily Telegraph, “you probably could not get away with half the stuff you could on Hey Hey now because of the political correctness and cancel culture”.

Ah yes, cancel culture.
Unsurprisingly, the internet did what it does best and organised a social media pile-on in response. A particularly damaging clip was unearthed as part of that process, which showed the kind of treatment Malaysian-Australian guest Kamahl was subjected to. Most concerning was a 1984 sketch where Kamahl’s face was covered in white powder, with fellow cast member John Blackman joking off-screen, “You’re a real white man, Kamahl.”

How pleasant.
The clip went viral and prompted Kamahl to speak out about his experiences on the show, telling The Feed: “It’s humiliation. It’s like pouring crap over somebody.” He also appeared on ABC’s 7:30 and said, “Hey Hey was a land mine, and I knew I’d get blown up here and there occasionally, but there were some instances that were harder to stomach than others.”

Did we hear from Daryl?
He took to the official Hey Hey It’s Saturday Facebook page and shared a public apology.

Hey Hey, It’s Damage Control.
Indeed. “I want to make it very clear that I and all members of the Hey Hey team do not condone racism in any form,” Somers wrote on Facebook. “I have always considered Kamahl a friend and supporter of the show, so I deeply regret any hurt felt by him as a result of anything that took place on the program in the past.”

For the record, Kamahl graciously accepted the apology.

Hmm. This isn’t the first time Hey Hey has been accused of racism, though, is it?
Nope. During a 2009 reunion special, five men performed in blackface during the Red Faces segment. Calling themselves ‘The Jackson Jive’, the men sang the Jackson Five hit, Can You Feel It.

Does ‘it’ refer to a crushing sense of deep national embarrassment? Because yes, I can feel it.
The sketch made international headlines because US singer Harry Connick Jr was on the judging panel that day and immediately called the show out for the segment.

I assume that was the last time Hey Hey graced the airwaves?
No. The show returned to Nine (the owner of this masthead) in 2010 for a 20-episode stint but failed to return for another season in 2011.

Noted. So, what can we expect from this reunion episode?
Somers will return, as will some of the show’s famous characters. According to the Seven Network, “this special television event will put the spotlight on the very best of the madness and mayhem that kept people laughing throughout the show’s remarkable run.” Somers said in a statement, “I hope we can offer a few laughs, not only to the diehard Hey Hey fans but to all Australians, as we desperately need a touch of levity at this time.”

I might seek my levity elsewhere. When is Hey Hey We’re 50 going to air?
October 9 this year, exactly 50 years to the day since it debuted.