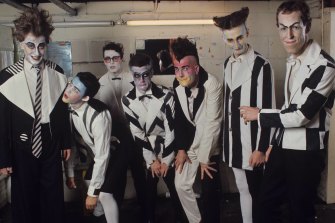 In 1976, when Split Enz were recording their second album at London’s Basing Street Studios, Brian Eno popped by to check on progress and was stopped in his tracks by a simple four-chord instrumental bridge in the song Walking Down a Road.

Keyboard player Eddie Rayner remembers his comment: “Wow, just the piano, bass and drums sound so good – leave it like that.” In other words, without the pile-on of vocals, percussion and guitars.

“It was just a linking piece,” Rayner recalls. “But it was kind of glorious.”

Like film on the cutting-room floor, so much music falls by the wayside or gets buried in the editing that follows recording sessions. Forenzics, a new collaboration by former Split Enz bandmates Tim Finn and Eddie Rayner, pays homage to the fallen. 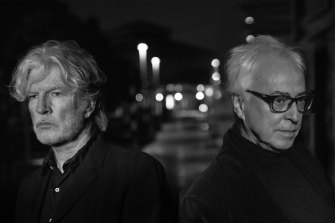 Forenzics, says Rayner, reflects the way the famous New Zealand band, which was formed in 1973 and split in 1985 after global success, worked. “The highlights were the rehearsals and sound checks. Something magic happens when you’re jamming. Forenzics is just little bits of songs that Tim and I particularly loved – motifs we felt were never capitalised on.” An inevitability, perhaps, for a band more maximalist than minimalist like Eno, their songs, as Finn puts it, “full of changes and curveballs”.

Rayner wanted to experiment again with this “mystical and mysterious” process of jamming. In just a few sessions, pre-COVID-19, at his beachside studio in Auckland, his posse of close musician friends (Mark Dennison, Adrian Stuckey and Patrick Kuhtze, aka Double Life) improvised to their hearts’ content, recording an instrumental trove.

Meanwhile, Finn, bunkered down on the other side of Auckland composing opera and theatre, was toying with the idea of working snippets of Enz musical ephemera into fresh new compositions.

‘People are surprised to see septuagenarians still in bands. But look at Springsteen, the Stones and Dylan. I think I’m just getting started.’

The two concepts collided. Finn contributed lyrics and vocals to Double Life’s music and then to a cache of musical beds that Rayner mined from reimagined and reconstructed Split Enz recordings. Roxy Music’s Phil Manzanera and former Split Enzer Noel Crombie were invited to contribute guitars and percussion, and Forenzics was born. Shades and Echoes is a dreamy, light-footed album that will come as 11-track vinyl and 15-track digital.

“It’s the tidepool of memories that Eddie and I share,” says Finn of the collaboration. “Knowing so much about each other’s life has definitely informed the work.” He’s rather taken by author Milan Kundera’s concept of “elegiac nostalgia” … the evocation of “a tenderness that has an elegiac feeling to it because life is passing by, with many things lost along the way.

“To be able to rediscover things with an old friend is really special.” 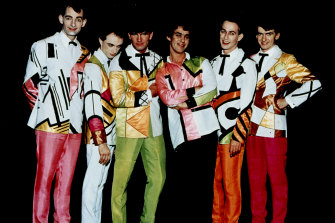 Split Enz in their True Colours suits, designed by Noel Crombie for the 1980 international breakthrough album which included the single I Got You by Neil Finn.

The most high-profile Rayner/Finn collaboration to date is My Mistake, in 1977 the first Split Enz single to reach the top 20. “I still perform that now,” says Finn. “Why didn’t we do more together? I have no answer to that. I guess I was busy finding my own voice.”

Finn’s vocals in Shades and Echoes are Leonard Cohen wise and David Bowie suave. His lyrics are inspired by poets, philosophers, astrophysics, landscapes, memories, the idiosyncrasies of fathers – and an urge to sing in French, which he gives into on the very cool track Premiere Fois.

Enz detectives will be putting the band’s 1975 debut Mental Notes under the microscope in their search for clues, along with Second Thoughts (which Manzanera produced) and Frenzy.

”Strange Stars is a psychedelic take on a song I wrote for the opera, Star Navigator (Ihitai ’Avei’a),” says Finn. “Singing the melody and words over my piano part from Under the Wheel [Mental Notes] felt like a wheel not only turning full circle, but like a prayer wheel spinning for infinity.”

Of the album’s first single, Chances Are, Finn enthuses: “I really love Phil Manzanera’s guitar on this one. It’s slightly unhinged and molto espressivo! And it was energising to hear Eddie revisiting his Mellotron swipes from Spellbound [Mental Notes].”

The gossamer back-up vocals from Sydney singer-songwriter Megan Washington are the gift with purchase. Washington has toured and performed with Finn, and she co-wrote the title track on his ninth solo album, The View Is Worth the Climb.

Rayner is a quiet achiever. He eschews stardom: doesn’t like the separation it engenders. “I’ve never been a fan. Whenever I meet a musical hero, I realise they’re just flawed human beings like I am. I like to feel I can talk to anybody without feeling overawed.”

He never set out to be the Split Enz chronicler – “to be an archivist is the bass player’s job; they are usually the list-makers” – but he likes to look after the past. 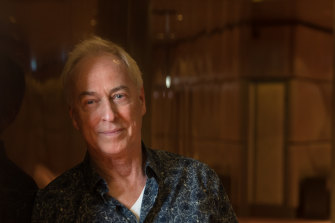 Eddie Rayner in 2017: “I never set out to be the archivist, that’s usually is the bass player’s job; they are usually the list-makers.′Credit:Simon Schluter

“I do cherish what Split Enz did. I fell into that role not long after the band broke up in 1985, taking stock of all the stuff nobody could be bothered with. I have all the lists. I can put my hand on any tape. I’m the archivist by default.”

This meant he was able to give last year’s 40th anniversary release of the band’s big seller, True Colours, a little tweaking.

“There were a couple of things that niggled. I didn’t like the way the drums sounded: the high hats were very, very loud on the original mixes, and we spoke about that for years afterwards. Noel’s percussion had been neglected, too. We fixed that.

“Over time, your catalogue gets passed from pillar to post as various people get the rights to it. I wanted to restore the quality and maybe even improve on it.” 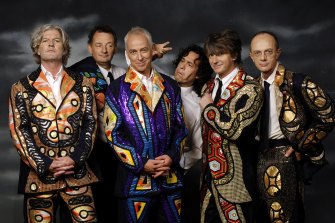 Says Origin’s creative director Philip Mortlock, “Eddie’s inventiveness has grown and grown. Given that he is self-taught and still can’t read music, his prowess as a musical arranger and composer is extraordinary. As a musician, he is one of New Zealand’s most prolific all-rounders.”

Rayner joined Split Enz in February 1974 after several years’ honing his keyboard chops in bands and being, he admits, “rudderless”.

“Then I heard some of the material Split Enz was doing. Tim’s voice – and melodic sense! I’d never heard anything like it,” he said.

“There was an incredible range of skills and talents in the band – Phil Judd, Noel Crombie and Robert Gillies were a real creative force. No-one has style like Noel, visually or musically.” (A curation of Crombie’s wardrobe wizardry is housed in Victoria’s Performing Arts Museum.) 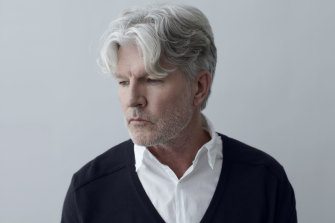 Tim Finn (pictured in 2016) was the one who understood how to get visibility and exposure, says Rayner.Credit:Stephen Ward

Tim Finn was the driving force, says Rayner. “I was full of enthusiasm and ambition for the band and the songs, but he was the one who understood what steps were needed for visibility and exposure.”

Singles such as I See Red, I Got You, History Never Repeats, Six Months in a Leaky Boat and Rayner’s favourite, Message to My Girl, became pop classics.

Rayner spent 12 years with the Enz, toured with Crowded House, and established a reputation as a sound engineer, producer, arranger and session player (he played on Paul McCartney’s 1986 release, Press to Play, and was interested to learn that the famous bass player preferred playing drums). 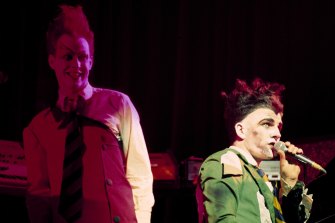 Eddie Rayner, left, and Tim Finn on stage with Split Enz at Imperial College in London in 1976.Credit:Getty

Instrumentals are his passion. “The incessant warbling of a singer can get in the way of decent music,” he says mischievously. Rayner’s desert island disc would be Ryuichi Sakamoto’s Merry Christmas, Mr Lawrence. He’s also a sucker for TV show themes and appreciates pianists with technical agility.

The album, ENZSO, released in 1996, went platinum. There was a second album in 1998 and a 20th anniversary issue in 2016. Rayner’s deal with Origin extends to his ENZSO concert library, with Origin Theatrical now handling the licensing of his orchestral arrangements.

“I’d been doing orchestral arrangements for Split Enz for years without even realising it. Keyboard players have all the sounds at their fingertips – string, piano, organ, brass.

“I’ve always been drawn to complex, sophisticated music. I loved bands like Yes and Genesis. Prior to Split Enz, I was in a prog rock band called Space Waltz.”

Indeed, Rayner has just recorded the follow-up to the 1975 album Space Waltz by Alastair Riddell. If there were a category of the Guinness World Records for the longest gap between debut and follow-up, says Rayner, this would win hands down. Recording together, 46 years later, is the original line-up of Alastair Riddell, Brent Eccles, Peter Cuddihy and Greg Clark.

Then there is Another Life to record, a band comprising Rayner, Patrick Kuhtze and singer Andrew Snoid (McLennan), ex-Pop Mechanix and The Swingers.

Rayner turns 69 next week , the age Tim Finn has beaten him to by several months . He works office hours, breaking twice a day for a cup of Dilmah tea.

“People are surprised to see septuagenarians still in bands and making really good records,” he says. “But it’s not that surprising when you look at Leonard Cohen, Springsteen, the Stones and Bob Dylan.

“I think I’m just getting started.”

Chances Are debuts on all streaming services from today [November 12]; the album Shades And Echoes is released February 4.

The best of Good Weekend delivered to your inbox every Saturday morning. Sign up here.