This comes as the average deposit you'll need is sitting at a whopping £38,400. 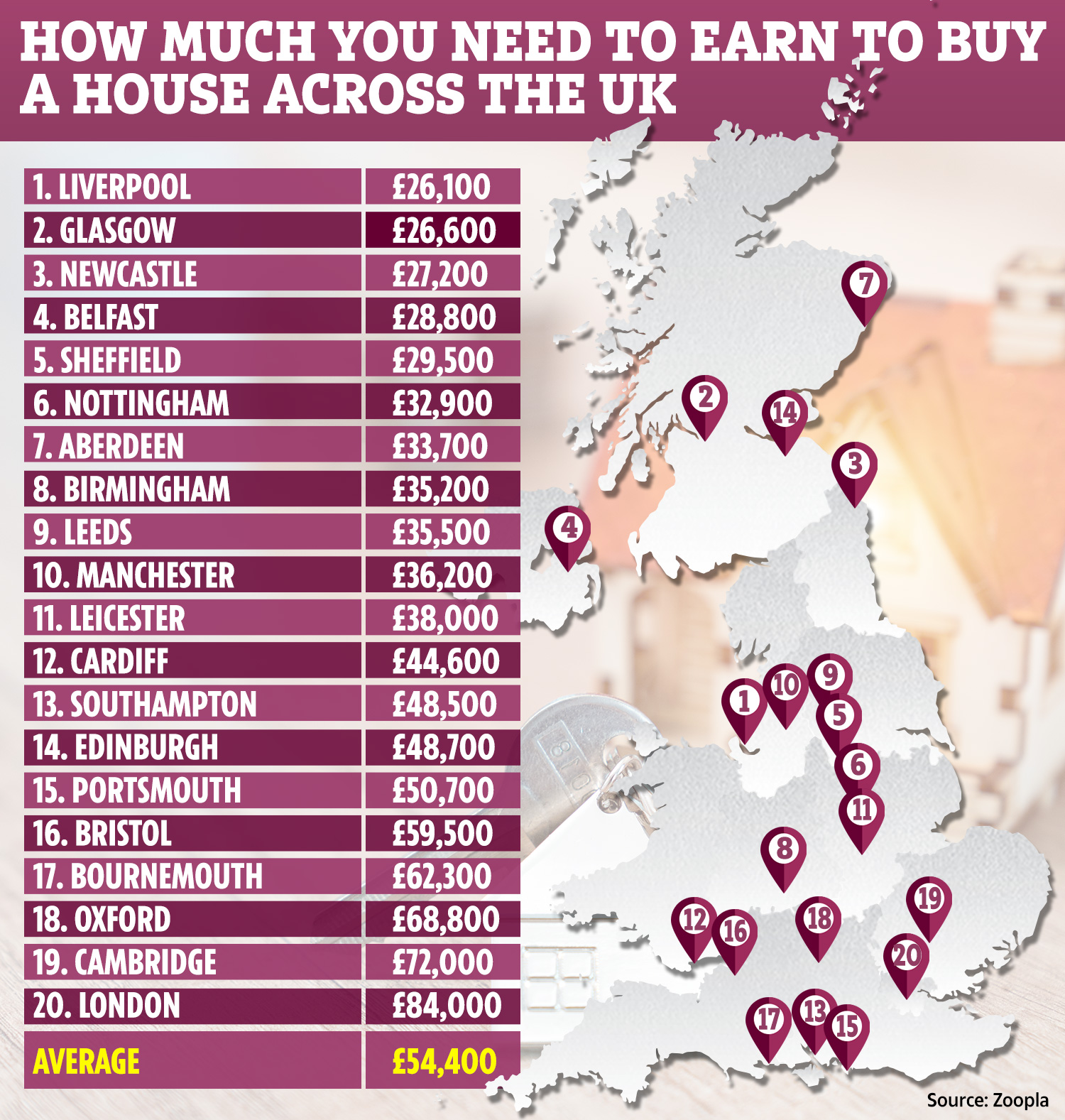 In an analysis of the house prices of the UK's 20 biggest cities, property website Zoopla found that Liverpudlians "only" need to earn £26,100 in order to get on the property ladder.

Meanwhile, residents in the capital would have to earn a whopping £84,000 to be able to buy their first property.

This comes despite the fact that the average household income needed has dropped by £3,250 in London compared to 2016 due to weak growth and price falls, Zoopla said.

Outside London, Cambridge and Oxford require the highest first-time buyer incomes, although like London these have also fallen over the past three years. 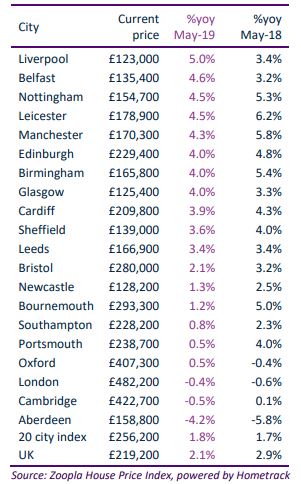 Leicester has seen the largest percentage increase in the income required to buy since 2016, at 20 per cent, followed closely by Birmingham and Manchester.

Across all the cities looked at, the average income needed has increased by more than £4,500 or 9 per cent over the past three years.

The research assumed that 30 per cent of a household's income is spent on mortgage cots, and that buyers borrow no more than four times their income.

It also expected that buyers would have a 15 per cent deposit to put down, increasing to 25 per cent in more expensive cities such as London, Oxford and Cambridge.

Average mortgage rates were used to calculate repayments over a 30-year term. 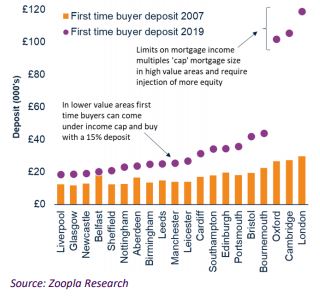 In August last year, the Halifax House Price Index showed that house prices had reached an all-time high of £230,280.

Yet there were also fewer homes for sale.

Then in January, Nationwide found that house prices slowed sharply at the end of 2018 recording its weakest annual growth in nearly six years.

Growth slowed from 1.9 per cent in November to 0.5 per cent in December, while house prices were also down by 0.7 per cent month-on-month at the end of the year.

Richard Donnell, research and insight director at Zoopla, said: "First-time buyers are an important group accounting for more than one in three sales.

"While the average household income to buy a typical home across UK cities has grown 9 per cent since 2016, weaker price growth and recent price falls have led to a 5 per cent reduction in the income to buy across the most expensive cities.

"It will come as a modest relief for would-be buyers although the income to purchase still remains relatively high."

What help is out there for first-time buyers?

GETTING on the property ladder can feel like a daunting task but there are schemes out there to help first-time buyers have their own home.

Help to Buy Isa – It's a tax-free savings account where for every £200 you save, the Government will add an extra £50. But there's a maximum limit of £3,000 which is paid to your solicitor when you move.

Help to Buy equity loan – The Government will lend you up to 20 per cent of the home's value – or 40 per cent in London – after you've put down a five per cent deposit. The loan is on top of a normal mortgage but it can only be used to buy a new build property.

Lifetime Isa – This is another Government scheme that gives anyone aged 18 to 39 the chance to save tax-free and get a bonus of up to £32,000 towards their first home. You can save up to £4,000 a year and the Government will add 25 per cent on top.

"First dibs" in London – London Mayor Sadiq Khan is working on a scheme that will restrict sales of all new-build homes in the capital up to £350,000 to UK buyers for three months before any overseas marketing can take place.

Starter Home Initiative – A Government scheme that will see 200,000 new-build homes in England sold to first-time buyers with a 20 per cent discount by 2020. To receive updates on the progress of these homes you can register your interest on the Starter Homes website.

Earlier this month, Martin Lewis urged first-time buyers to open a Help to Buy Isa even if you only put £1 in.

In April, a map revealed where first-time buyers need to save for a DECADE to get enough for a house deposit.

Meanwhile, here are six homes under £50k where single first-time buyers only need a £2,500 deposit.