How to be shark smart at Cape Cod

On Cape Cod over the summer, the anxiety wasn’t only about the traffic.

Beachgoers routinely saw great white sharks near popular beaches, and when a “60 Minutes” team visited the Cape earlier this month, they spotted the marine predators lurking close to the shore.

“To see that shadow going through the water, just yards off the beach, it sends a chill down your spine,” Whitaker told “60 Minutes Overtime” in the video above.

The Atlantic white shark population had been in decline, particularly after the 1975 release of the blockbuster movie “Jaws,” which encouraged hunters to kill them. But in 1997, the species was granted federal protection, and in the years since, the sharks have made a comeback along the east coast. 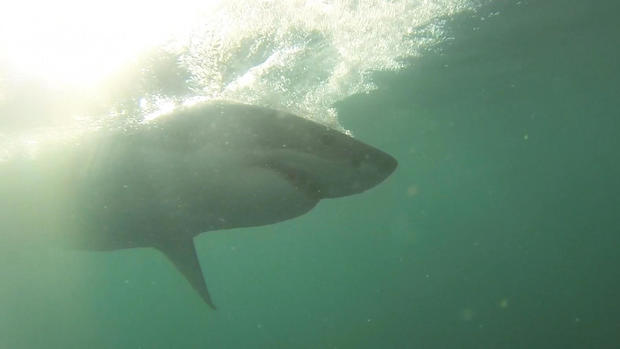 Their resurgence near Massachusetts is mainly due to the growing number of seals, the sharks’ favorite food. Some 25,000 seals now call Cape Cod home, and because seals are also federally protected, their population cannot be legally culled. Local scientists say cutting down on the number of seals would also be difficult to accomplish it even if it were legal.

“It’s not easy, it’s not reasonable, and it’s not feasible,” said Greg Skomal, the chief shark scientist for the Massachusetts Department of Marine Fisheries.

It seems the seals are here to stay—so are the sharks.

“This is the new normal,” Whitaker told 60 Minutes Overtime in the video above.

That does not mean the whole cape is now susceptible to a high volume of shark activity. According to Skomal, the south side of Cape Cod is at a lower risk for sharks near the shore, including Buzzards Bay, Vineyard Sound, and Nantucket Sound. Skomal said the water there is shallow and too warm for seals. 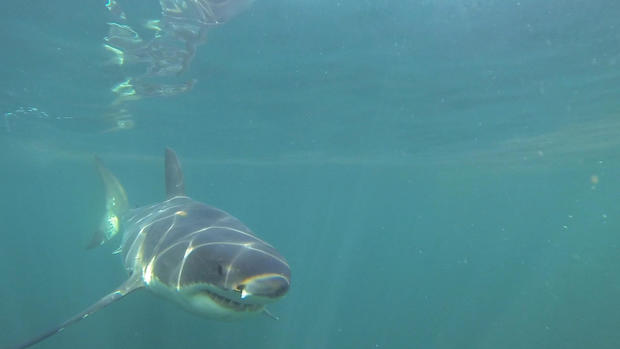 “It really boils down to the outer cape,” Skomal said. “So the Outer Cape, as well as Cape Cod Bay, down to roughly Wellfleet. That’s where we get the greatest number of sharks. And therefore, that’s the area of greatest risk.”

Still, shark attacks are incredibly rare. According to the International Shark Attack File, there were 66 cases of unprovoked shark attacks on humans in 2018. Annually, sharks attacks account for roughly six fatalities globally.

The scientists Whitaker spoke with emphasized that, while sharks may on occasion mistake humans for prey, great whites do not target humans. They are not telling swimmers to stay out of the water—but they are urging caution.

“Think about what you’re doing when you go to the ocean on the Outer Cape,” Skomal said.

Skomal and the Atlantic White Shark Conservancy has tips for how to avoid a shark attack:

* Avoid swimming in areas with seals
* Avoid going into the water above your waist
* Limit splashing
* Avoid murky water
* Avoid schools of fish
* Swim and surf in groups. Sharks usually attack seals when they are alone
* Avoid high-contrast clothing. Sharks see contrast well
* Avoid shiny jewelry. The light it reflects resembles fish scales
* Do not enter the water if you are bleeding

The species that used to be abundant in the waters off the South Africa shore is now disappearing; according to Bloomberg, great white sharks have not been seen near Cape Town since early 2018.

Skomal told Whitaker one reason for the decrease may be the presence of another predator—the orca. Killer whales are the only natural predator of great white sharks.

If the trend continues, the disappearance of great white sharks will be a major hit to South Africa’s ecotourism industry. For years, great white sharks have drawn tourists to the waters where the Atlantic and Indian Oceans meet, and 60 Minutes has had an up-close look.

In 2005, correspondent Bob Simon visited the country’s “Shark Central,” where some 35,000 tourists came each year to get as close as they could to the predators. Simon himself got close; he climbed into a cage and went swimming alongside the sharks.

In 2010, correspondent Anderson Cooper returned to water off South Africa for 60 Minutes. He reported on “the sharkman,” Mike Rutzen, who studies great whites up close off the coast of Cape Town. Cooper also dove underwater to go swimming with the sharks, but he got even closer—he had no cage, no protection separating him from the two-ton predator.

For his report on the broadcast this week, Whitaker bucked the trend. He stayed safely out of the water, no shark-proof cages or scuba gear involved. But in a sense, Whitaker got the closest yet—he touched a live great white shark with his bare hand. Considering that the species has never been held in captivity, petting a great white is a very rare experience.