Bonjour, Andrew Barth Feldman! The ‘Dear Evan Hansen’ alum has joined ‘HSMTMTS’ as Antoine, and HL got EXCLUSIVE scoop about what’s next after that big ‘Beauty and the Beast’ showdown.

There’s a new character on High School Musical: The Musical: The Series to watch out for: French exchange student Antoine. Antoine, played by Dear Evan Hansen star Andrew Barth Feldman, is Lily’s partner in musical mischief at North High. The June 25 episode of season 2 introduced us to the suave and confident Antoine, who tried to steal Big Red’s girl and faced off in a battle of the Lumieres.

HollywoodLife spoke EXCLUSIVELY with Andrew about his first-ever acting role on television and his process of getting into character as Antoine. Don’t expect Antoine to go easy on North High. He’s very much like Lily and is “here to win.” Andrew teased North High’s next “moves” and the tricks that Antoine has up his sleeves — or beret. 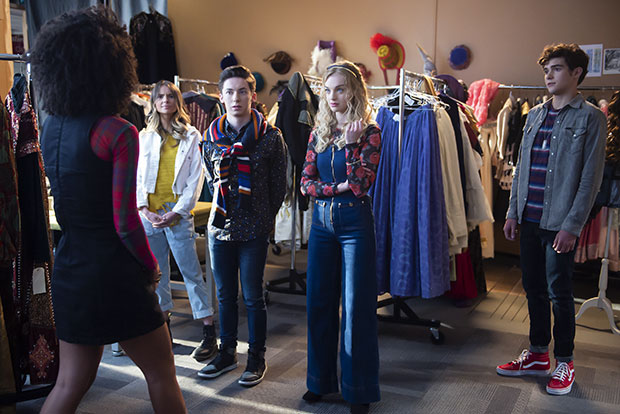 How did you find yourself in the High School Musical universe?
Andrew Barth Feldman: It’s kind of a crazy story. I had done the general Disney Channel audition that’s just for them to see you and who you are and whether they’re interested in you. But then I started doing Dear Evan Hansen, and I think they were interested in me to audition for season 1, but I didn’t do it because I was already committed to Dear Evan Hansen. But when the show started coming out, I texted my agent, “I’m obsessed with this. I really would love to be part of this.” She made a call, and they hadn’t written the season yet. They were in the middle of writing the season. So they said that they would keep me in mind because they liked me and they knew who I was. When it came time, I got a tape for this character Antoine, which they wrote for me or they wrote with me in mind, which is like the greatest gift of all time.

How did the French accent come into play? Was that always the plan?
Andrew Barth Feldman: He was always a French exchange student. That was always the plan. In terms of how I got that accent, I took French for six years starting in middle school, and I remember absolutely nothing. I guess I had some practice with the accent, but I did work with a dialect coach on this show — only once — but it was enough to just kind of get me comfortable enough. I had it pretty strong and then I went to set and they were like, “Just do it funny.” I keep it rooted in an actual French accent, but I’m just trying to make it as silly as I possibly can. It was terrifying. I’m glad it came out the way that it did. It seems like I know what I’m doing.

Antoine is classmates with Lily and she’s very intense, to say the least? Would you say Antoine has a good heart at the end of the day?
Andrew Barth Feldman: I think Antoine is here to win. So, good or bad? I think there’s definitely goodness in him. But I think Lily is like his hero. He’s following pretty much in lockstep with her, and she has very little, at least at this point, moral compass. He’s just kind of here to win. He’s very dead set on that. He just loves wreaking havoc.

Antoine’s a confident guy. He goes right up to Ashlyn and tells her she should dump Big Red and date him. What’s next with that?
Andrew Barth Feldman: It’s definitely up to Big Red and Ashlyn to figure that out for themselves. Antoine very much serves his place in the story by shaking up their relationship a little bit, so I think in the next couple of episodes we’ll see the two of them get to figure that out for themselves.

The episode’s dance-off was awesome. How did this dance-off to “The Mob Song” work? We hadn’t seen a musical number this big on the show in a while.
Andrew Barth Feldman: It was really funny. They said to us that we were going to be doing a dance remix of “The Mob Song.” I was listening to it again and again. When Tim Federle told me the story justification is that my character is a DJ, it was like the best thing that’s ever happened to me. It’s perfect. It makes perfect sense for the story, and it’s justified that it’s “The Mob Song” that we just picked a random song. I think it works so perfectly and the choreography… Zach Woodlee, the choreographer, did an incredible job making us look good. I’m not really a dancer by nature, so he really made us look good.

Is there anyone at East High who Antoine is intimidated by?
Andrew Barth Feldman: I think Antoine’s more generally intimidated than he’ll let on, but definitely Carlos. They’re battling Lumieres, and we get to see for a moment their little faceoff. I think there’s definitely a level of intimidation there. 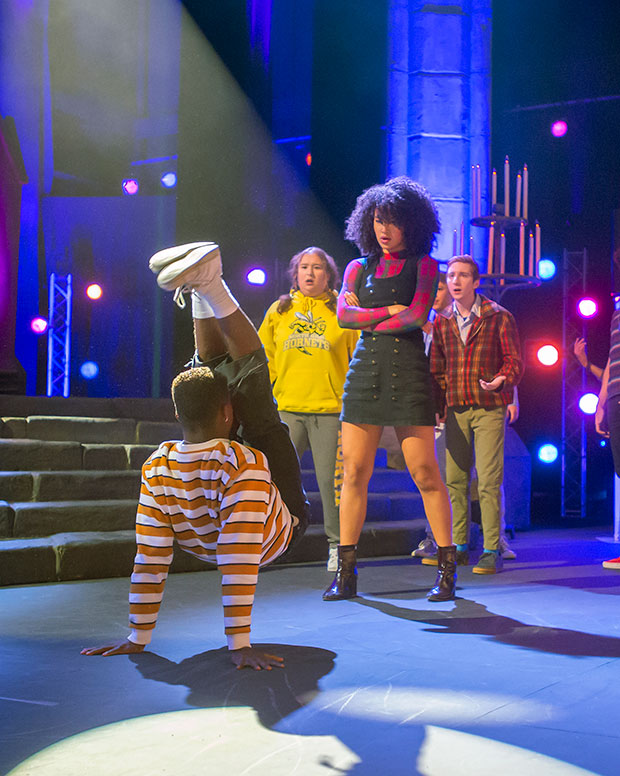 After this showdown, things are very intense between the two schools. What is North High’s next move?
Andrew Barth Feldman: I think there are a lot of moves left. I think at this point it’s seeing what’s going on at the Menkeys and now we get to kind of track back to East High in the show and see how they’re going to retaliate against North High, which is so exciting. These next couple of episodes that are coming out are just fantastic. But North High’s got it in the bag. I’m rooting for North High, personally.

Will we possibly see how Antoine and Zack work together? We haven’t seen Antoine with anyone else other than the East High kids and Lily.
Andrew Barth Feldman: Antoine still has some fun moments up his sleeve. There’s still some Antoine to come is all I’ll say. So many of the things that I did were so in the moment. I tried to do a bunch of different, wacky stuff with every take and every line and things like that, so I can assure you that there’s some more Antoine coming.

Would you want to bring back Antoine if there’s a season 3?
Andrew Barth Feldman: I would love to bring him back for a third season. I would, if nothing else, love to sit on the couch and watch the third season. The show absolutely deserves it and needs it. It’s incredible and the fan base is getting even stronger. We’re all really, really, really keeping our fingers crossed. I would be so honored to bring Antoine back. I’m having way too much fun.

This was one of your first TV roles, right?
Andrew Barth Feldman: It was my first-ever TV role. When I was in Dear Evan Hansen, we did some performances here and there on Good Morning America and things like that, but never have I gotten to really act and play a character on TV. Not to mention that this is definitely my favorite character that I’ve ever gotten to play. It’s just so much fun. It’s the best ever.