Network Ten’s acquisition of Oprah Winfrey’s exclusive interview with Prince Harry and Meghan, Duchess of Sussex has paid off, delivering a national average audience of more than 1.78 million viewers. 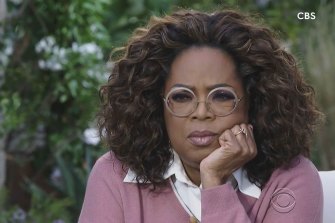 Oprah Winfrey during her interview with Meghan, the Duchess of Sussex.Credit:Internet

“Ten will be over the moon with that result,” says Ian Warner, a partner and analyst at Moonlighting Media. “I’m pretty confident this will be one of the highest-rating non-sports programs of the year.”

The special – in which Meghan accused the royal family of worrying about how dark their baby’s skin would be, while revealing she had been close to suicide during her pregnancy with Archie – is rumoured to have cost Ten $400,000.

“That’s more than worth it for them,” Warner says. “They would have more than made that money back in advertising revenue and it’s a great platform to promote their other shows. I wouldn’t be surprised if Ten’s prime-time programs enjoy a bit of a ratings bump this week.”

In 1995, the ABC screened two broadcasts of Martin Bashir’s BBC interview with Harry’s mother Diana, the former Princess of Wales.

The first screening – which aired in the morning in Australia, concurrent with BBC’s evening broadcast – averaged 931,200 capital city viewers, while a nighttime repeat drew an audience of almost 1.53 million.

In the US, more than 17 million Americans watched Winfrey’s bombshell interview, according to preliminary data. The numbers are expected to rise when broadcaster CBS releases final official data.

The interview was the first given by the Duke and Duchess of Sussex since they stepped back from the British royal family a year ago.

While a ratings success for CBS, the preliminary 17.1 million audience was well below that of last year’s Oscars telecast at 23.6 million – one of the biggest celebrity events on US television.

Meghan and Harry’s tell-all dominated the conversation on social media, morning television shows and newspaper front pages on Monday in Britain and abroad.

“We had the radio on in the office all day yesterday,” Warner says. “Oprah’s interview was the lead story on every news bulletin. There was so much publicity about it that Ten didn’t even need to promote it.”

*Nine is the owner of this masthead.