I lied to school about children sickness and went on holiday

A mother has sparked debate after admitting that she lied to her children’s school and took them on holiday during term time.

The anonymous woman, from the UK, took to parenting forum Mumsnet to ask others for their reassurance.

In it she detailed how guilty she felt about telling the school that her children had sickness bugs before pulling them out of school for three days so that they could enjoy a family holiday before prices rocketed at the holidays.

She said: ‘So before anyone decides to go hard on me, I have never ever lied about kids sickness before. 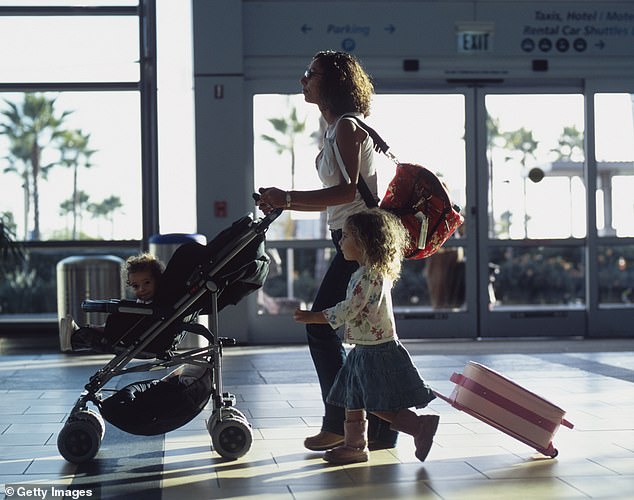 An anonymous mother, thought to be from the UK, has sparked a debate on Mumsnet about school holidays (stock image)

‘I don’t know why I did it this time, I guess money is tight, we worked hard to be able to afford the holiday, but still could not afford the holiday in half term, so we decided to take kids out of school for three days.

‘I reported my children to have sickness. And off we went.’

However, she began to panic when the school tried to get in contact with them and could not.

‘But unsure why, probably based on their hunch, school called me the next day. I did not answer, just sent them a message instead. 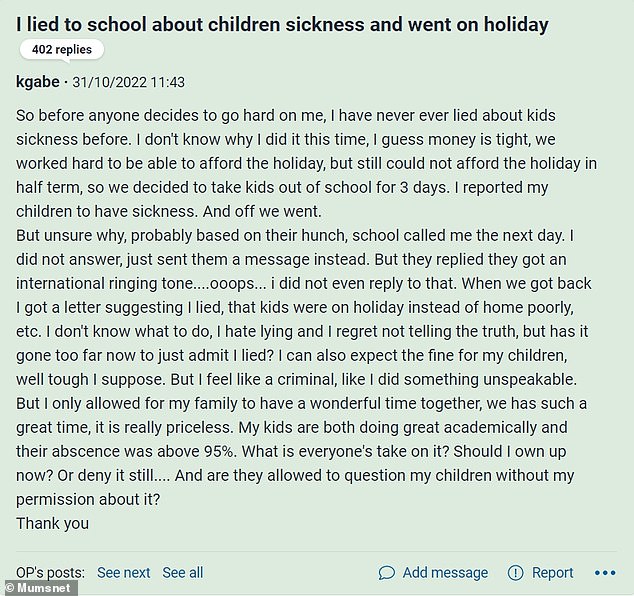 In the post the mother revealed that the school were suspicious of her and sent her a letter confirming this. She said that she hates lying but thinks that she’s in too deep now

‘But they replied they got an international ringing tone….ooops… I did not even reply to that.

‘When we got back I got a letter suggesting I lied, that kids were on holiday instead of home poorly, etc.’

She explained: ‘I don’t know what to do, I hate lying and I regret not telling the truth, but has it gone too far now to just admit I lied?

‘I can also expect the fine for my children, well tough I suppose. But I feel like a criminal, like I did something unspeakable. But I only allowed for my family to have a wonderful time together, we has such a great time, it is really priceless.

‘My kids are both doing great academically and their abscence was above 95%. What is everyone’s take on it? Should I own up now? Or deny it still…. And are they allowed to question my children without my permission about it? Thank you.’ 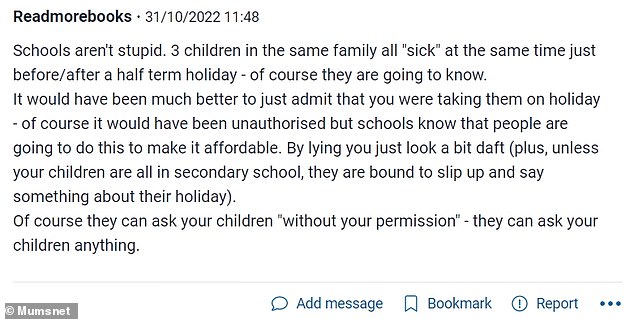 Many parents were quick to share their opinions and whilst some questioned the validity of the school’s accusations a lot of people critcisied the woman for lying and encouraged her to own up to what she had done.

One person commented: ‘I am not always against term time holidays in some circumstances but you take the chance of getting a fine and just pay it if you get one.

‘You have behaved very badly and given your children a very bad example.’

Another said: ‘I’d put my hands up and admit it. Doubling down on a lie makes it worse in my opinion.’

While a third posted: ‘Yeah, you should have just admitted it before you went and taken the risk of getting a fine. Instead you lied and that really isn’t good.’

And a fourth said: ‘Schools aren’t stupid. Three children in the same family all “sick” at the same time just before/after a half term holiday – of course they are going to know.

‘It would have been much better to just admit that you were taking them on holiday – of course it would have been unauthorised but schools know that people are going to do this to make it affordable.

‘By lying you just look a bit daft (plus, unless your children are all in secondary school, they are bound to slip up and say something about their holiday). 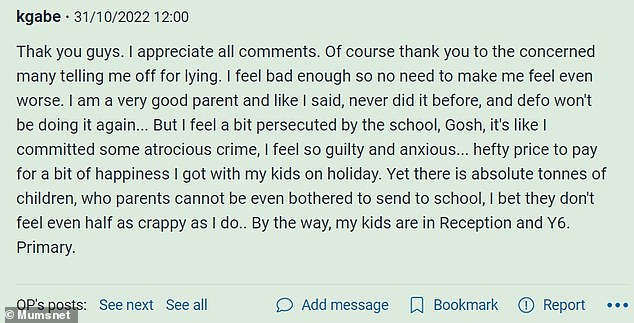 The original posted responded to the comments thanking people for taking the time to reply to her.

She said: ‘Thank you guys. I appreciate all comments. Of course thank you to the concerned many telling me off for lying. I feel bad enough so no need to make me feel even worse. I am a very good parent and like I said, never did it before, and definitely won’t be doing it again…

‘But I feel a bit persecuted by the school, Gosh, it’s like I committed some atrocious crime, I feel so guilty and anxious… hefty price to pay for a bit of happiness I got with my kids on holiday.

‘Yet there is absolute tonnes of children, who parents cannot be even bothered to send to school, I bet they don’t feel even half as crappy as I do.. By the way, my kids are in Reception and Y6. Primary.’

Some people replied to her further comments, telling her to ‘stop making excuses’ and admit to what she did

However, her response was not welcomed by some and one person posted: ‘Oh stop making excuses.

‘You lied, you got caught out. It doesn’t matter what other parents do or don’t do – just own it!’

‘Lesson learned. Next time save up longer for your holiday or choose a cheaper one so you can go during half term.

‘Can’t see you being fined over three days though as it doesn’t work like that.’

However, she did gain a large amount of support with many people encouraging her to continue with the lie and questioning what the school could really do.

One person posted: ‘You don’t have to “admit ” anything. I’d email head and say I’ve received this letter, what happens next.

‘And leave it there. If you get a fine then yes pay it. Personally I’d have gone with sickness bug, 48 hours off school. And ring every day to tell them.’

A second commented: ‘Tell them you were away with work and they were home with their dad. You’ve already lied so may as well commit to it.’

And a third said: ‘Ignore them, I wouldn’t admit to it, say you were away with work and they were home with dad/grandparents/childminder. Ridiculous amount of time spent on chasing this sort of thing up.

‘It’s your choice and if you can’t afford a holiday in school holiday then this is what you have to do.

‘School isn’t the only place that kids learn. I took mine out quite a lot in primary school.’