‘I lost my mind, I completely lost my mind’: Perfume Genius is here, and ready to move you 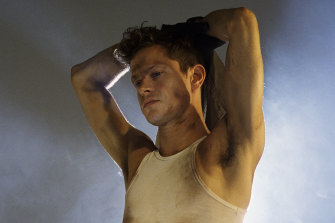 Indie icon Perfume Genius will perform in Australia in June.

Less than five minutes into our conversation, Perfume Genius has hit a roadblock. The Seattle-raised, Los Angeles-based musician is trying to describe the way in which his performance style has changed over the years – and, specifically, how it’s changed since he started playing shows again in late 2021, after two years of live music events being cancelled or delayed – but he can’t find a way to verbalise the feeling that’s particularly safe to print: “I keep thinking of naughty ways to say what I’m saying!”

It’s not uncommon, throughout our conversation, for Perfume Genius, real name Mike Hadreas, to get stuck at a moment like this. Often, when trying to articulate some kind of rapturous musical experience, he’ll hesitate, attempting to find a metaphor for his process that isn’t tied up in the profane or the carnal. Eventually, he finds a way to explain what he means, without resorting to anything particularly blue. 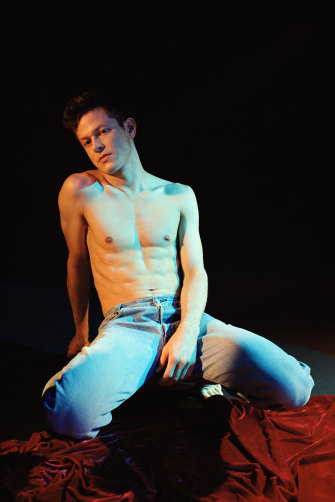 Perfume Genius: “I have more of an idea of where I want to go onstage, and how I want to feel onstage.”

“Every album cycle, every tour, I feel a little more settled into [performing], and I can kind of be more present and stay in the zone,” he explains. “Sometimes, in the beginning, it used to be that if I was more present, I was completely thrown into some anxious place – so I kind of had to pretend like I wasn’t performing a lot. And now I don’t have to pretend that at all.”

When we speak in late April, Hadreas is between tours, at home in Los Angeles – he’s just finished a jaunt around the US, and is preparing to tour Australia for VIVID and Dark Mofo. Clad in a plain black shirt and occasionally interrupted by his chihuahua Wanda, Hadreas looks much the same as he has for most of his career – boyish for 40, and effusive, slipping freely between arch online-isms and moments of deep, inquisitive earnestness.

“It was very overwhelming to me. When I’m onstage dancing and screaming and thrashing around, I [always] felt like I was on my own doing that.”

At this point, Hadreas has been releasing music as Perfume Genius for nearly 15 years, over which time he has become one of the most revered and acclaimed figures in modern indie rock. In the past decade-and-a-half, the scope of his music has widened dramatically, the sparse lo-fi folk of 2010’s Learning eventually giving way to experiments in slick, metallised electronic music on the 2014 breakthrough Too Bright, baroque pop on 2017’s Grammy-nominated No Shape, and lithe, Americana-tinged art rock on 2020’s Set My Heart On Fire Immediately. The trajectory of Hadreas’ music, from insular, painfully intimate folksong through to spectral, avant-garde pop, seems to mirror the transformation he identifies in himself – almost paralysing anxiety giving way to a powerful embrace of physicality.

Now, Hadreas is preparing to release Ugly Season – an album vastly different from anything he’s made before. The score for a contemporary dance piece titled The Sun Still Burns Here, which Hadreas and his romantic and musical partner Alan Wyffels performed in with Seattle choreographer Kate Wallich in 2019, Ugly Season is amorphous and strange, a long-form compositional project that forced Hadreas to completely reframe the way he made music.

“Collaborating is a hard thing to do for me – like I can meet someone halfway, and bring them something and then we finish it together, or they bring me something and I add some stuff,” he says. “But starting something from scratch with someone else is really difficult for me because it takes a lot of communication, and you have to kind of try to explain things that are very difficult to explain.” 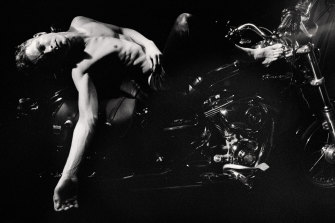 The natural solution, then, was to find an entirely new vernacular with which to collaborate. From the conception of The Sun Still Burns Here, Hadreas, Wyffels, Wallich, and Wallich’s company The YC, would partake in intensive improvisational dance sessions together, moments of extreme intimacy that gave Hadreas a new sense of how physical and tactile performance could be.

“I don’t really have a frame of reference for [contemporary dance], so it was really a wild thing to do. One of the first rehearsals that we ever did – and this is pre knowing what we were even doing, just all of us kind of meeting – was, like, improvised movement,” he recalls. “I had never danced with anyone else, and then suddenly I’m in a pile of eight people rolling around, cradling who I realised later was Laura, but who I didn’t know at the time – before I hadn’t even really talked to her, I was like, rocking her.”

For Hadreas – who, even when surrounded by a band onstage, often seems caught up in an intensely personal state of rapture – this represented entirely new territory. “It was very overwhelming to me. When I’m onstage dancing and screaming and thrashing around, I [always] felt like I was on my own doing that,” he says. “I never had someone touching me onstage. I never had someone saying something – I felt like I was always the one that had to say everything. So it was wild to be on stage and performing where everybody’s saying something in equal measure.

“Plus, just being held and lifted up and lifting other people – I got really strong, and it felt very physical. I lost my mind, I completely lost my mind,” Hadreas says. The physicality of the rehearsals and performances of The Sun Still Burns Here left a mark on him, greatly influencing the immediate, rhythmic feeling of Set My Heart On Fire Immediately.

Where Perfume Genius music once saw Hadreas struggling against his own body, whether in the form of his anxiety or his struggle with Crohn’s disease, Ugly Season and Set My Heart On Fire Immediately are tactile, embodied, forceful. Even the song titles on Set My Heart On Fire Immediately – On The Floor, Just A Touch, Your Body Changes Everything – seem to point to Hadreas’ new point of view.

Despite the impact The Sun Still Burns Here had on him, though, writing the score for the piece, Hadreas says, was one of the hardest projects he’s ever undertaken. After mapping out the general structure of the piece with Wallich and the YC, he, Wyffels, and his longtime producer Blake Mills decamped to a studio to flesh out how the music would sound. Resolute that he didn’t want to record a purely ambient piece (“I didn’t want you to feel like you’re missing something listening to Ugly Season on its own,” he says), Hadreas set out to create a longform suite that still had structure and drive.

“Me and Blake and Alan specifically did some jamming, improvisational stuff together, which is new for me in the studio. It was kind of exciting to not have to make pop music – it’s not like it’s crazy experimental, but it’s less bound to trying to fit it in a three-and-a-half minute long structure with a verse and chorus and stuff,” Hadreas says. “But I also really like that too, so we would do these 10-minute jams and then I would try to force a verse and chorus on top of it, which was maddening. I never had a harder time in the studio [than] trying to do that, because it was all improvised.”

The result is an album that takes all the hallmarks of a Perfume Genius record – Hadreas’ voice, a lithe, rubbery instrument prone to breaking into a glassy falsetto at any moment; slinky, sultry bass lines that feel beamed in from the Black Lodge in Twin Peaks; lyrics that draw lines between the spiritual and the surreal and the profane – and twists them into new shapes, elongating and mattifying them, turning them into genuine dance tracks and angular, arrhythmic walls of sound.

It’s a record that’s clearly shifted how Hadreas operates as a writer and a performer. “Through doing the dance and meeting Kate and working with the dancers, I have more of an idea of where I want to go onstage, and how I want to feel onstage, and also that I could feel good on stage – I never really thought about that,” he says. “It was such a powerful experience – it’s never really gonna leave me.”

Perfume Genius will perform at the Melbourne Recital Centre on June 9 and 10; Carriageworks as part of Vivid Sydney on June 11 and at the Dark Mofo Festival in Hobart on June 17.

Ugly Season is out via Matador/Remote Control on June 17.