I was GLAD when my date hit someone in my defence

Feminists may want to slap me, but I was GLAD when my date hit someone in my defence! CLARE FOGES says it’s understandable why Will Smith slapped Chris Rock after making a joke, verging on ‘bullying,’ at his wife’s expense

The settings could not have been more different: a star-studded audience in Los Angeles on the glitziest night of the year; revellers weaving drunkenly across a London high street at closing time.

Yet, seeing the footage of Will Smith slapping Chris Rock at the Oscars, after the comedian made a joke about his wife’s hair loss, I had a flashback.

I had been out carousing with a group of friends, including my boyfriend at the time. As we wandered along in search of a night bus, I became aware of a particularly inebriated young man who I’d never seen before loitering on the edge of our group. He cast me a couple of furtive looks before slipping away. 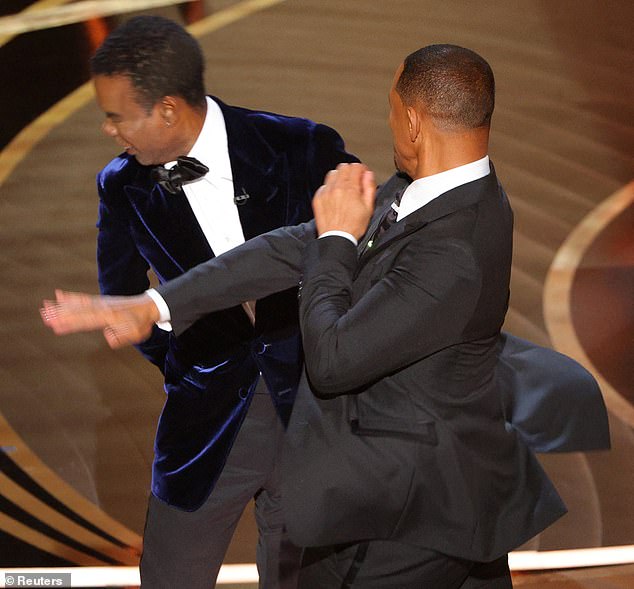 UK-based writer Clare Foges says that although Will Smith slapping Chris Rock at the Oscars (pictured) it is understandable as to why he did it. She urges us to put ourselves in Jada’s and Will’s shoes

Or so I thought. Suddenly, I felt a thwack across my bottom. Looking around, I saw the cross-eyed assailant holding up his weapon: a large banana. Judging from the sting as he swiped me, it was an unripe one, too.

A few seconds later came another surprise. My then boyfriend lifted his elbow in a swift motion under the man’s chin, laying him flat on the pavement, akin to Sonny Liston after going a few rounds with Muhammad Ali.

Was I horrified? Disgusted? Embarrassed? None of the above.

The man was not properly hurt; he got up and scarpered away quickly after the incident. And I remember being pleased, in the moment, that banana-man had not got away with his assault so lightly. And, yes, I was glad that the man I was with had defended me.

Though I have never gone in for the damsel-in-distress act, and I regard myself as a feminist, something ancient within me suggested that my boyfriend had reacted in the right and proper fashion.

All this is why I feel so conflicted about the furore gripping Tinseltown. The consensus seems to be that Will Smith deserves eternal damnation for his actions.

They are busy erecting stocks on Sunset Boulevard so that horrified luvvies can pelt him with rotten fruit and vegetables. There is even talk of the Academy stripping him of the Best Actor Oscar he won later that night.

Of course, he was way out of line for slapping Chris Rock. It was emotionally incontinent of Smith to wander up on stage and assault someone. You’ve got to wonder about his general state of mind.

But while the act was unacceptable, wasn’t it also understandable and — whisper it — a bit chivalrous?

There is a tradition these days of award ceremony hosts pushing the bounds of taste and politeness; they take a pop at the captive celebrities for our viewing pleasure.

Ricky Gervais is the master of this kind of comedy. At one awards show, he made the joke that Leonardo DiCaprio had attended a film premiere, and by its end his date was ‘too old for him’.

This kind of joke is enough to cause a sharp intake of breath, but it falls short of being nasty. The joke directed at Smith’s wife, Jada Pinkett Smith (who has previously talked about her alopecia), on the other hand, was mean.

The smiling Chris Rock blew his poison dart, jibing about her shaved head, as the couple were forced to sit there and grin with an audience of millions watching.

Freeze that frame for a moment and imagine the anguish that the couple must have endured because of her condition.

Though Jada doubtless lives in a vast mansion with an Olympic-sized swimming pool, she has also suffered something any woman would find extremely difficult to deal with. 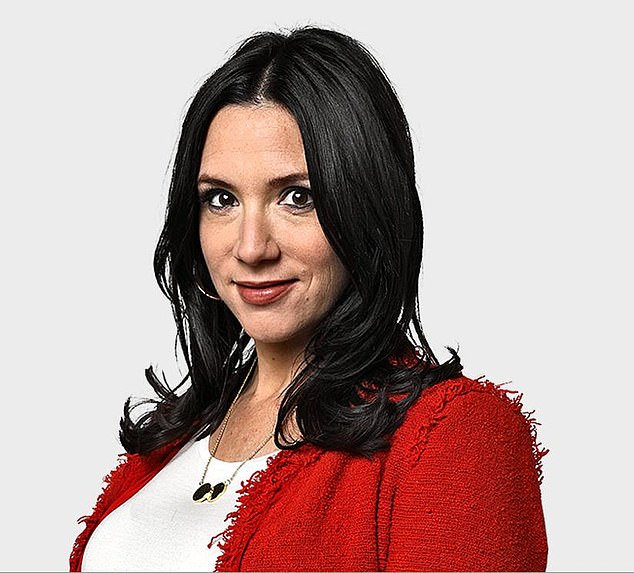 Clare (pictured) recalls a similar incident that happened to her, when an ex-boyfriend sprang to her defence. She says that she was glad that someone was there to defend her

Think of the times she will have sobbed about her hair loss, or felt (wrongly) like less of a woman. Think of her husband comforting her and reassuring her that she is still gorgeous.

Think of how she may have wearily tried different treatments, headscarves and hair pieces while envying other women’s hair.

Then think of how she will have got glammed up for their big night — Will Smith’s probable Oscar win for King Richard.

Putting on a regal dress and a fabulous pair of earrings, steeling herself to face the world with confidence. Think of him reassuring her that she looks beautiful as they head out in their limo.

Then think of how you would squirm inside as you are forced to smile along as a comedian — who you know personally — sticks the knife in and twists it around as the cameras are trained on you.

Her emotional laundry was aired to millions around the globe. In any other context we’d call this what it is: bullying.

In that moment, Will Smith might have felt that a failure to challenge Rock’s comment would have been a betrayal of his wife. Drunk on nerves, he probably thought he had to defend his wife’s honour.

So he got up and did something crazy. As he put it: ‘Jokes at my expense are a part of the job, but a joke about Jada’s medical condition was too much for me to bear and I reacted emotionally.’

Following the public outcry over her husband’s slapping of Rock, Jada put a simple message on Instagram: ‘This is a season for healing and I’m here for it.’

She comes across as a dignified, measured person, so I doubt she will make any great ‘I stand by my man’ statements.

Yet I wonder whether she will also be experiencing similar feelings to my own on that London pavement years ago; a warm reassurance that she has someone in her corner who will defend her if needs be — albeit one who does so a little too fiercely.

I can hear the hardcore feminists screaming: ‘This is the problem with the patriarchy! It’s men thinking they need to look after delicate, helpless little women. We can take care of ourselves!’

I hear you, sisters. I don’t want a man ordering for me in a restaurant or telling me what to think about current affairs, thanks very much. I am resolutely independent.

Yet, at the same time, I can’t deny that biology has bequeathed in me a desire to be defended when the chips are down.

‘Defended’ shouldn’t automatically mean a slap to another man’s chops, of course — no woman wants to be with some fist-dragging knucklehead who uses her ‘honour’ as an excuse for violence.

But, equally, few women would want to be with a man who would see her assaulted, either verbally or physically, and simply stand by.

Call it un-PC if you like but, for many of us, it’s the truth.