The 21-year-old actress says she’s the industry’s “acceptable version of a black girl”.

Speaking at the Beautycon Festival she said colourism within the beauty and entertainment industries needs to end.

“As a light-skinned black woman it’s important that I’m using my privilege, my platform, to show you how much beauty there is in the African-American community,” she said. 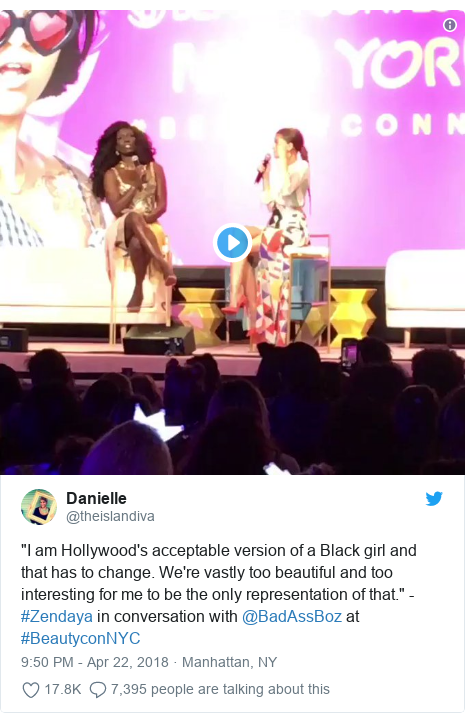 Her comments were made during a discussion about representation with Uber’s chief brand officer, Bozoma Saint John.

It’s not the first time Zendaya has spoken about a lack of diversity on-screen.

The former Disney star told Cosmopolitan in 2016 it was important for her to understand her “privilege” as a light-skinned black woman.

“Unfortunately, I have a bit of a privilege compared to my darker sisters and brothers,” she said.

“Can I honestly say that I’ve had to face the same racism and struggles as a woman with darker skin? No, I cannot.”

She also addressed the issue of beauty standards in 2015 after Modeliste Magazine altered an image of her.

“Had a new shoot come out today and was shocked when I found my 19-year-old hips and torso quite manipulated,” she wrote on Instagram.

QUEEN 👑. @zendaya on being a REAL model – not just a role model at her fireside chat with @badassboz at #BeautyconNYC this weekend.

QUEEN 👑. @zendaya on being a REAL model – not just a role model at her fireside chat with @badassboz at #BeautyconNYC this weekend.

Colourism – discrimination against people who have darker skin, usually by people of the same ethnic group – has been in the news recently after a backlash to old tweets by BBC Radio 1 presenter Maya Jama.

The tweets, which have now been deleted, saw Maya mocking dark-skinned women.

The 23-year-old was forced to apologise twice after anger that her first apology was directed towards “all women” rather than dark-skinned black women.

The tweets and apologies sparked a big reaction online.

Black Mirror and Chewing Gum actress Michaela Coel, who’s been pictured with Maya in the past, commented on her second apology.