First Nations leaders have put forward two potential dates for a referendum on an Indigenous Voice to parliament, prompting Labor leader Anthony Albanese to say he still wants a referendum in the first term of a Labor government but he stopped short of committing to the timeline.

Indigenous Australians Minister Ken Wyatt accused Albanese of walking back on the party’s commitments after the largest gathering of Indigenous leaders in five years urged the winner of next month’s election to have Australians vote on the matter in the next parliamentary term. 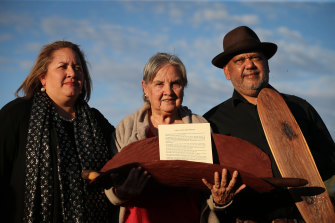 Megan Davis, Pat Anderson and Noel Pearson with a piti holding the Uluru Statement from the Heart in May 2017.Credit:Alex Ellinghausen

The summit of key Indigenous leaders – convened by the creators of the Uluru Statement from the Heart – met in Yarrabah in Queensland over the weekend, where delegates reaffirmed their support for a constitutionally enshrined Voice to parliament. They proposed two dates for the referendum: May 27, 2023, or January 27, 2024.

Both days would fall on a Saturday with the latter taking place right after Australia Day, also known as Invasion Day or Survival Day to many First Nations people.

May 27 would coincide with the 56th anniversary of the 1967 referendum amending the constitution to allow the government to make laws for Indigenous people and include them in the census. That vote was overwhelming, with almost 91 per cent of participants voting for change.

During the weekend’s meeting, delegates visited the Knowledge Tree on Gunggandji Country in Yarrabah, where the 1967 referendum was planned.

A Voice to parliament would act as an advisory body to MPs regarding legislation and policies that affect First Nations people.

Labor has committed to holding a referendum to enshrine the Voice in the constitution as per the calls of the Uluru Statement.

Indigenous Australians Minister Ken Wyatt had previously promised to legislate a Voice before the election but retreated from this in August.

The Coalition instead announced a plan to attempt to legislate local and regional Voice bodies in the first half of 2022.

While that legislation was not passed, the federal government did assign $31.8 million dollars towards establishing 35 local and regional bodies next financial year. However, no funding was put toward the Voice process in the forward estimates. 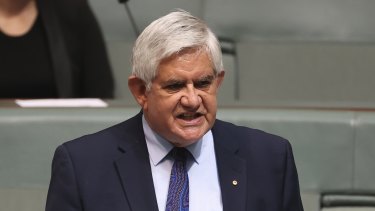 Wyatt said he was committed to delivering a legislated Voice, and argued that Labor didn't have a practical plan to establish an advisory body.

"It is now evident that Labor has no clear plan to empower Indigenous Australians at the local and regional level and aren’t committed to the design of the Indigenous Voice co-design process, which was the result of extensive consultations and engaged 9400 individuals and organisations across Australia," he said.

While campaigning in Launceston, Albanese said wanted to hold a referendum in the first term of a Labor government, but he wouldn’t commit to the timeline put forward by the Uluru Dialogue.

“I’ll sit down with Indigenous people and if we’re successful, but it would be my intention to hold a referendum in our first term,” Albanese said.

Wyatt accused Labor of leaving room to walk back on previous commitments.

“The Morrison government has consistently said that we will go to a referendum once a consensus is reached and at a time it has the best chance of success. It seems that Labor has come to that same position, after pushing the government to rush to a referendum just a year ago,” he said.

Constitutional law expert and Uluru Dialogue co-chair, Professor Megan Davis, said it was time for action after years of waiting for change.

Davis urged voters to make the issue a priority at the ballot box next month.

“[This affirmation] is really about saying to politicians, look you weren’t ready in 2017, but the Australian people are now,” Davis said.

While the Coalition does not support enshrining an Indigenous Voice in the Constitution, a promise to hold a referendum on Indigenous constitutional recognition has been a formal policy since 2007.