Getting vaccinated against the coronavirus makes your body magnetic, one post warned. Another, citing the “World Hoax Organization,” claimed the COVID-19 vaccines have gone through “fuck all tests for safety and effectiveness.” A third suggested Bill Gates and Anthony Fauci tried to “kill everyone with a Plandemic.” Others pushed similarly baseless nonsense.

I came across each of these falsehoods over the past few days while scrolling through Instagram. They weren’t shared by accounts I follow — all appeared in my Explore feed, the algorithmically curated collection of public content that Instagram serves to its users. The app’s recommendation engine is designed to show us whatever kind of content it determines will be most likely to hold our attention, based on our online behavior. Instagram recently encouraged users to think of this system “like a perfect pair of jeans, tailored just for you.”

Though it’s disturbing to think that a stream of anti-vax propaganda has been tailored just for me, it may not seem entirely surprising: As a reporter covering online disinformation, I spend a good deal of time looking at conspiratorial content. But Facebook-owned Instagram has for years claimed that it’s working to reduce the spread of anti-vaccine falsehoods across its platform — regardless of the audience — and it’s not only recommending this content to those who seek it out.

“We won’t show or recommend content that contains misinformation about vaccinations on Instagram Explore or hashtag pages,” the company vowed back in March 2019. It restated its promise to crack down on such content time and again in the weeks and months to follow the policy announcement, when media outlets noted that nothing had actually changed. It did so again a year later, when I reported that Instagram was recommending posts pushing false information about vaccines and the coronavirus. Then again. And again, and again.

Nearly a third of Americans are unwilling to get immunized against COVID-19 or are uncertain if they will do so, according to new polling from Morning Consult. As public health experts warn that staggering rates of vaccine hesitancy threaten to derail the nation’s pandemic recovery, pressure has mounted on social media giants to counter the spread of anti-vax misinformation across their platforms.

While it is now much harder — though certainly not impossible — to find such content on Facebook, YouTube and Twitter than it used to be, Instagram is still promoting anti-vaccine disinformation — pushing this content to the screens of users who may not even be looking for it, and, in especially harmful cases, ushering them into an echo chamber of extremist anti-vax conspiracy theories.

In other words, when it comes to the proliferation of vaccine-related paranoia, Instagram isn’t just failing to douse the fire — it’s actively fanning the flames.

Finding anti-vaccine falsehoods on Instagram is as easy as typing “vaccines” into the search bar. I did so from multiple accounts, including newly created ones. Each time, explicitly anti-vax accounts featuring blatant disinformation were among the highest-ranked results, conspicuously undermining Instagram’s pop-up notice directing users to the CDC website for “reliable, up-to-date information.”

One such page, @vaccinesaredumb, has a measly 152 followers; its most recent post, from 2019, is an ad for essential oils that falsely claims the oils “are 100% more effective at preventing and treating disease than those toxic vaccines.” Another top-ranked account, @vaccinessuck, has only 204 followers and also churned out a flood of vaccine-related conspiracy theories until 2019, when it stopped posting. A third, @badvaxx_, has just 279 followers and almost exclusively shared anti-vax memes; it hasn’t posted since February 2020. 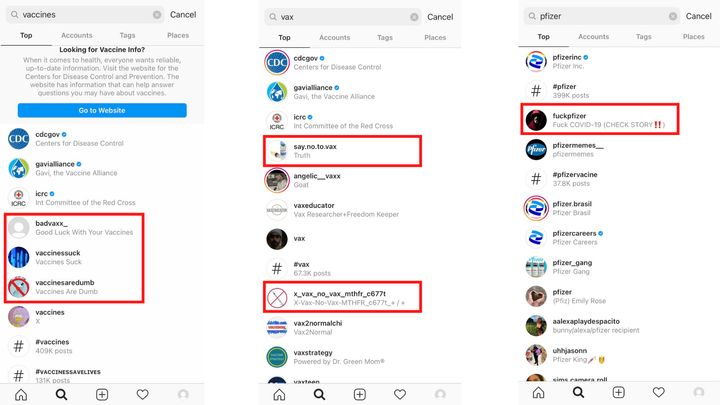 Each of these accounts is obscure, inactive and rife with anti-vaccine disinformation, which Instagram claims to be suppressing. So why does it feature them so prominently?

“Facebook is a business. You have to view everything through the lens of, ‘How does this impact their bottom line?’” said a former Facebook engineer who worked on the algorithm at Instagram. He asked to remain anonymous in order to speak freely about his former employer.

“When your business is a conduit for the attention economy, you’re going to do everything you can to keep people engaged on the platform for a long time, so you can show them ads,” he said, noting that sensational, polarizing content, including anti-vaccine propaganda, can drive major engagement.

A Facebook spokesperson told HuffPost that Instagram “removed the [sic] all the violating posts shared with us, and disabled an account for repeatedly breaking our rules,” adding, “We continue to strengthen our systems and detection, so that we can remove COVID-19 misinformation more rapidly.”

The company did not address its continued promotion of anti-vax disinformation. It’s well aware that its search results for “vaccines” are a public health nightmare. Last month, after I noted on Twitter that the pages @moms_against_vaccines_fb and @the_other_side_of_vaccines were two of Instagram’s most prominently featured search results for “vaccines,” CNN aired a segment on the matter. In response, Instagram tweeted that it had removed the accounts in question “for breaking our rules,” noting that they “should not have been searchable” in the first place. But when I searched “vaccines” on Instagram just moments later, a new account openly advocating against vaccinations had already taken their place among the top search results. 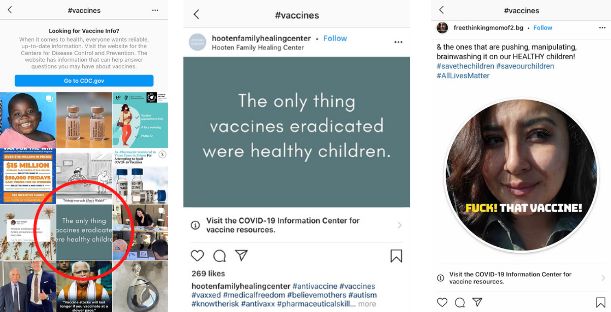 Searching through Instagram’s algorithmically curated hashtag page for #vaccines is equally troubling. For more than a week, the top featured results have included anti-vax posts, including one that claims, “The only thing vaccines eradicated were healthy children.” Alongside #vaccines, its caption includes the hashtags #antivaccine, #antivaxx and #bewaretheneedle.

By promoting anti-vaccine untruths, Instagram is legitimizing and even encouraging distrust in vaccines. More than a quarter of Americans who use the app regularly get their news there and rely on it to stay informed, Pew Research Center found in 2020.

Facebook and Instagram have taken several steps to support vaccine distribution efforts, including by connecting users with local vaccination sites. But Instagram’s aggressive promotion of anti-vax disinformation subverts these efforts — and is entirely preventable.

Instagram is capable of moderating its Explore feed, search results and hashtag pages to exclude specific kinds of content. It has spent years quietly purging sex workers from its platform in addition to deranking and removing their posts, which critics decry as a sly effort to appease advertisers. Yet as the former employee points out, Instagram continues to treat images of female nipples as a greater threat than disinformation that discourages millions of people from getting potentially life-saving vaccinations.

“It’s all business calculus,” he said. “They could fix it, they just won’t.”