I've done dozens of these lunches but never before has a guest serenaded other diners. Theatre doyen Robyn Archer made me weep revising the song her mother most loved, while soulstress Kylie Auldist broke into a few bars of her massively popular remixed track This Girl.

English-Jamaican chef Ainsley Harriott, though, ramped it up a level. After dealing with a tech issue, I head back to our table to find him laughing raucously with two businessmen sitting next to us. He's been singing to them – and they're lapping it up. 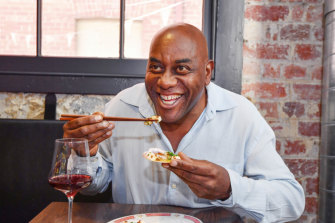 It's possible they recognised him for his musical turn in the Calypso Twins. Harriott hit public consciousness in 1990s (bonus points for knowing it was with Paul Boross) as part of the duo best-known for World Party.

I assumed the effervesence common to television hosts was something turned on for the cameras. No one could be that up all the time, surely? Today it seems effortless, as Harriott exudes a natural charm. He's already invited the photographer to join us for a chat and flirted with the waiter discussing the menu so I shouldn't be surprised.

In a nice twist, given West India's cricketing expertise, the sport's holy land was the birth of Harriott's broadcasting career. He was a chef at Lord's and chatting to a friend about his cousin Jeffrey Dujon, a West Indian wicketkeeper at the time. They started to talk about the family and how cooking was a big part of his life. Harriott mentioned that his grandfather had cooked at the White House and the friend suggested it was a story that should be told. From there, he was interviewed on radio, and then picked up to host a radio show. The rest is history.

It's hard to say what Harriott is best-known for in Australia – his face, mannerisms and flamboyant persona are clear in my consciousness but I can't recall exactly which show brought him to my attention. Of late, it's the show Ainsley's Australian Market Menu on SBS that has him back in the public eye. 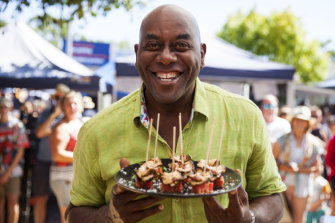 We’re at Lee Ho Fook, the stylish Asian stalwart down one of Melbourne’s lanes. Harriott is in fine form, in the midst of filming the market show. Neither of us has eaten breakfast so we order up – two scallops, sang choi bau, Shandong-style chicken, cumin lamb ribs and the house specialty, eggplant with spiced red vinegar.

He is chatty, ebullient and great company, breaking into laughter readily and regularly.

The night before, he had been to the night market at Queen Victoria Market, which he raves about, "an incredible scene". Apparently 20-odd people asked him for selfies as he and his friends wandered around. 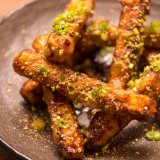 He's also known as the host of the original Ready, Steady, Cook, which began in the UK. One of the first food shows to reach broad audiences, it asked everyday punters to choose a number of supermarket ingredients. A rotating roster of celebrity chefs then had to improvise dishes using them.

Fresh back from Logan, just south of Brisbane, which reportedly houses one of our most multicultural markets, he waxes lyrical about Australia's markets. They have captured his imagination; all around the world, they are his entree into the local community. As the show illustrates, markets provide an insight into the many and varied cultures around the country. Not only for what we cook, but, more importantly, who we are.

Coming from an immigrant family – his parents went to London from Jamaica in 1950s – it was clear to him as a child that connecting with others often happened via food.

He still lives very close to Battersea, where he grew up. “So I’ve got mates I’ve known since I was five years old. Their children know my children. There’s something really lovely about it. When you’re an immigrant – my parents were immigrants, their brothers and sisters lived all over the world, Florida, Jamaica, some in Europe – it’s a grounding thing. That community is critical.” 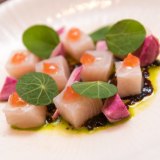 It’s not by chance he is filming in Australia. One of his best mates, with whom he first played music and performed comedy, works at Geelong Grammar. Harriott loves this part of the world and its food in particular. "I was talking to my executive producer on the show and asked him, 'what exactly is Australian food?'." Cue a broad Aussie accent, "Well maaate, a lot of fusion – and pies!"

Impetus for the show came from his interest in people, together with a bigger picture vision. He filmed a similar series in the Caribbean, for which he reunited with Calypso Twin Boross to write new music. The more prestigious islands such as the Bahamas and St Lucia had an abundance of fresh produce but in smaller places like Dominica, it was another story. No red snapper was available, for example, and the mangoes "fell from the tree two weeks ago".

"It was like 'What!'. I was suddenly thrown in the deep end. You have to be really resourceful, see what’s available in the market. You are on a beautiful beach, there’s no oven, it was always the grill or a little pan on a stove."

Of course, not having specific ingredients on hand can lead to great discoveries. In Logan, Harriott found someone who grew his own kundru, which is like a miniature squash.

“When we talk about foodies, we’re talking about less than five per cent of the population who eat nicely. For most people it’s just fuel: ‘I gotta feed the kids’. We’ve got to look out for those people, get them on board, [teach them] about nutrition. You can eat interestingly without having to spend a lot of money, with a little bit of preparation.”

Harriott wants to illustrate the benefits of buying fresh produce at the market and to show how much you can do with it. He’s realistic about time pressures and not averse to convenience: use the curry paste you have in the fridge, or whatever it is that will help feed the family and serve healthy food that tastes great. Accompany a simple curry with homemade naan, the traditional Indian flatbread, for which he quickly recounts the recipe. "A bit of yoghurt, flour, egg and water, a bit of kneading, it's simple.”

While a fan of shows such as MasterChef, he’s wary of their impact. "People think they can’t do it. It’s like watching a beautiful artist, a beautiful dancer, a brilliant football player – that doesn’t mean we can do it," he says. "We need to address that."

In 2008, Harriott appeared on Where Do I Come From. Unexpectedly, the show revealed that his great-great grandfather was Scottish – and a slave owner. “It’s like a Netflix series,” he says, adopting a dramatic TV voice-over tone. "And so it unfolds, my grandfather, Ebenezer …”

“What I found disturbing was that they’d gone to Africa and bought all these people, trained them to be soldiers and took them all back to kill all of their own people. That was what they did.”

What I found disturbing was that they’d gone to Africa and bought all these people, trained them to be soldiers and took them all back to kill all of their own people.

Though confronting, the experience was fascinating. “For me yes, but more so for my kids; they can look back and say, ‘This is who I am, this is where I come from’.”

Growing up, his father Chester was an entertainer; he played piano and for many years was part of a comedy duo. The young Ainsley loved the many get togethers hosted at the family home, which introduced him to people from around the world – Greece, Poland, Italy, China and India.

“All these wonderful influences, Mum wanted to reciprocate… West Indian style [in the] nice living room with flocked wallpaper. My dad had a big beautiful piano there, I’d hide there under the piano and take it all in, watch all the goings on.” 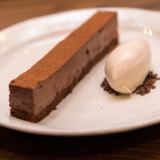 English comics Des O’Connor and Bob Monkhouse were among the many visitors and were formative influences. “That’s what made me [think] 'Oh, if I do that, that makes people happy'. Food was a way of making people happy. It was years later that I was able to transfer that on to the screen: bring the smile and the light and the happiness to the screen.”

Family is a theme he returns to regularly; he has three children, aged 28, 25 and 15, who he sees often.

"I want to have a relationship with my kids. I want them to be free with me, to have a good relationship. You push them all the time. I don’t know what we’re pushing for though – to get a job, to get a mortgage…" his voice trails off. "We have a lovely time together. We go to soccer matches together. We have season tickets, my daughter is a bit more passionate than my son. That moment when we’re all in the car, that’s gold, you can’t buy that.”

He often tells his kids, "Never say never". "People were dancing in the street last night and I joined in with them. It’s just enjoying it – and people. People give you so much. Even with this market series, I thought we will create the drama naturally." 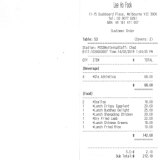