Chickens are becoming more popular as family pets, with even households in the middle of Sydney turning to poultry-keeping.

About 416,000 Australian homes keep chickens, making them the fourth most popular pet behind dogs, cats and fish, according to a national survey of more than 4000 people. 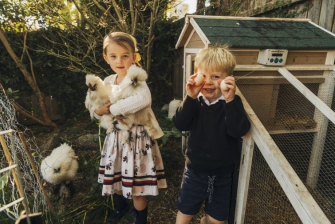 Daphne and Peter Ward, age 5 and 3, with the silkies in their backyard in Cremorne.Credit:James Brickwood

The Ward family in Cremorne keeps three silkies in their back garden. Phoebe Ward said the family enjoys the eggs, but mainly keeps the birds as pets for Daphne, 5, and Peter, 3.

"They come up and sit with my daughter and they just sit on her lap and look very fluffy and cute," Ms Ward said.

"They eat all of our scraps so potato peel or leftover sandwiches go straight to them and they love eating it all. I think it's just great for the kids to see where their food is coming from."

Ms Ward bought the birds in February and they've been such a success that a few friends followed her lead and now have their own pet silkies in their backyards in Centennial Park and Willoughby.

Most Sydney councils allow residents to keep chickens as pets – with restrictions around keeping roosters, the number of hens and keeping chicken houses away from boundary lines.

The Wards use a device called a ChickenGuard that automatically unlocks the coop in the morning and locks it in the evening, so the chickens can be free range during the day but safe from predators such as foxes, cats and snakes at night. Ms Ward said this meant the family could go away for the weekend.

Separately, the 2016 Animal Medicines Australia Pet Ownership report found one in 10 Australian households own at least one bird, and nearly one in four bird owners kept a chicken. The 2019 report is due later this year.

Douglas St Quintin, who sells prefabricated chicken sheds through his business McCallum Made, said it had become more socially acceptable to keep chickens. "Fifteen years ago it was only the crazy chicken lady but now people are proud or happy to sit in the pub and talk about owning chickens – it's not weird anymore," he said. 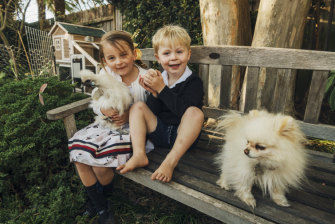 Daphne and Peter Ward like to cuddle the pet silkies and collect the eggs.Credit:James Brickwood

Most of his customers are hobby farmers on the outskirts of town but Mr St Quintin is eyeing growth in urban areas by offering a smaller shed in a range of colours.

"The inner-city market is more concerned about the look of the chook shed," he said. "They don't want the neighbours to come round and see something that looks like it belongs on a farm in Young."

The Sun-Herald reported last week that chickens are an eco-friendly pet because they are mostly vegetarian and eat human food scraps.

"They're as low maintenance a pet as any other – all animals need to be fed and watered once a day – and chickens give you breakfast," Mr St Quintin said. "Kids love them and with proper hygiene, they're as clean as any other pet."

Mr St Quintin said chickens did not attract rats if the owners stored the chicken feed securely – "the same as dog biscuits" – and used a rat-proof chicken feeder. He also recommended putting kitchen scraps in a container and bringing them back in after a few hours if left uneaten.