Jacqueline Wilson shares shock at being diagnosed with heart failure

Dame Jacqueline Wilson has spoken of her shock at being diagnosed with heart failure despite having always been ‘very active and eaten healthily’.

The much-loved author, 75, from Bath required urgent surgery to have an Implantable Cardioverter Defibrillator (ICD) inserted in May 2008, after tests revealed her heart was enlarged and only 26 per cent of it was functioning.

The ICD, which works as a small defibrillator inside the chest, is the same one that was recently fitted to Danish footballer Christian Eriksen and is still helping mother-of-one Jacqueline today.

Despite fearing at one point that she was ‘going to die’, the former children’s laureate said living with the heart condition has in fact helped her self-confidence and given her ‘much more perspective’. 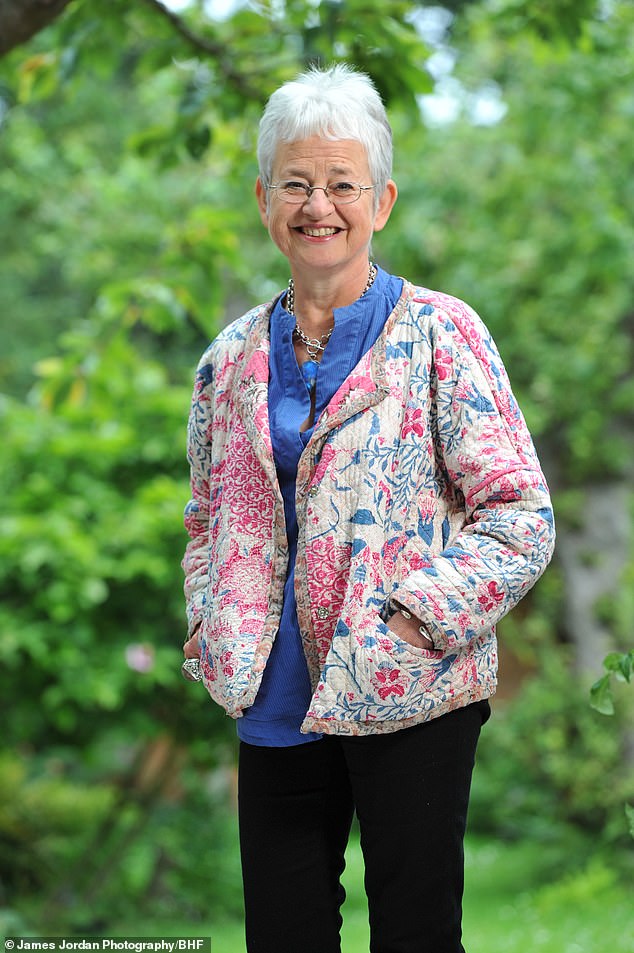 She opened up during an interview on the British Heart Foundation’s new podcast series the Ticker Tapes, and admitted she thought she was being a ‘hypochondriac’ when she first began experiencing symptoms.

‘I’ve always been very active and eaten healthily so it was a real shock to find out I had a heart condition,’ she said.

‘I had always prided myself on being the person that could keep going no matter what.

‘I remember looking in my mirror one morning 13 years ago and feeling particularly exhausted. I had a tight feeling around my chest and began to have further symptoms at night – a lot of coughing.

‘For quite some time I thought “just pull yourself together”, knowing that I can be a bit of a hypochondriac at times.’ 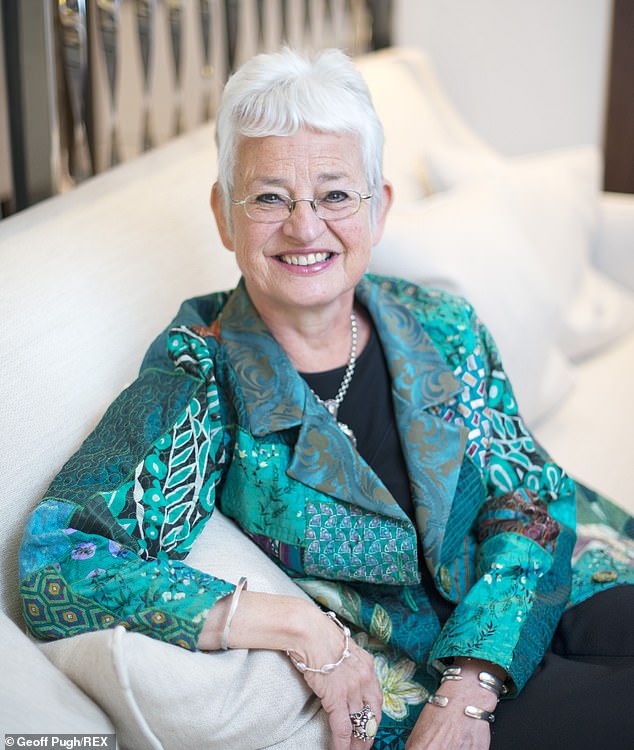 Despite fearing at one point that she was ‘going to die’, the former children’s laureate said living with the heart condition has in fact helped her self-confidence and given her ‘much more perspective’

Jacqueline added that she is eternally grateful for the quick action of her GP who, upon hearing about her symptoms, sent her directly to hospital for blood tests and an X-Ray.

Devastatingly, it was revealed that her heart was failing, and that urgent action was needed.

‘Initially at the hospital they said you’ve got a bad lung infection… and clearly it was fluid building up,’ she recalled.

What is heart failure?

Heart failure means that the heart is unable to pump blood around the body properly. It usually occurs because the heart has become too weak or stiff.

Heart failure doesn’t mean your heart has stopped working – it just needs some support to help it work better. It can occur at any age, but is most common in older people.

Heart failure is a long-term condition that tends to get gradually worse over time. It can’t usually be cured, but the symptoms can often be controlled for many years.

The main symptoms of heart failure are:

Some people also experience other symptoms, such as a persistent cough, a fast heart rate, and dizziness.

See your GP if you experience persistent or gradually worsening symptoms of heart failure.

‘And then there was a particular thing that [the doctor] was testing for in the blood test, and he was so astonished by the result he actually asked for it to be tested again.

‘I love this doctor, he’s got a sense of humour, he said “Well, there you are sitting in front of me and you look in the pink, but theoretically you should be dead by now”. My heart was failing.’

Jacqueline was quickly taken to the Royal Brompton Hospital and said she ‘didn’t have too long to ponder and worry because it all happened so fast’.

”It was strange because I’d been so used to telling myself “No, you’re just imagining it” and now it was happening for real. During this time I thought to myself, “Gosh I might die”. That was an awful moment,’ she recalled.

Jacqueline’s surgery happened the next day and her life-saving ICD was inserted into her chest through an incision.

Fortunately, both her daughter Emma and partner Trish were able to join her in the hospital. Jacqueline has been living with Trish for nearly 20 years, having revealed publicly that she is gay last year.

‘It’s lucky that I’ve got two hands because I could hold hands with one on both sides of the bed,’ she said.

Jacqueline continued to write while in hospital and claimed that, despite her circumstance, there wasn’t a change in tone or storyline of the book she was writing at the time. She carried on as usual and has been able to ever since.

After Jacqueline’s surgery and stint in hospital, whilst she could still write, she was unable to go to all her usual events at libraries, literary festivals, schools and book tours due to having to take time to recover.

The cause of Jacqueline’s heart failure is not clear, however her father had angina and passed away aged just 57.

Jacqueline said: ‘I don’t know exactly what caused my heart problem, it could have been working hard and stressed out because of work. It could have been simply that I inherited the tendency.’

It was two years after Jacqueline’s heart surgery that she was then diagnosed with kidney failure. As a result, Jacqueline was on dialysis for 18 months before fortunately undergoing a kidney transplant.

She continued: ‘I found my father’s death certificate which stated he died from a heart dysfunction and kidney failure. Sadly, I developed kidney failure too. 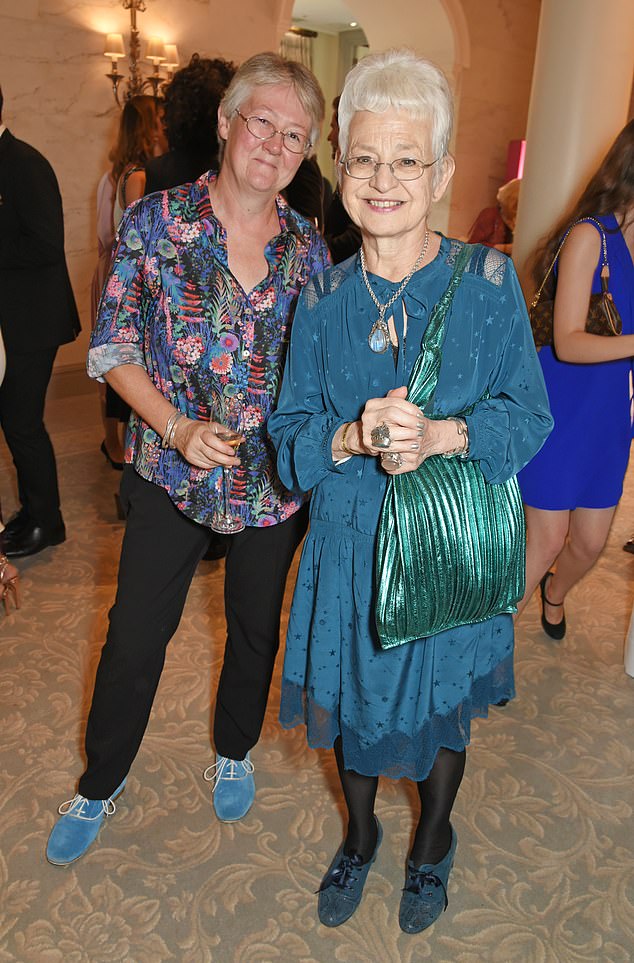 Fortunately, both her daughter Emma and partner Trish (pictured together) were able to join her in the hospital. Jacqueline has been living with Trish for nearly 20 years, having revealed publicly that she is gay last year

‘I had never really taken in that my dad died of precisely the same things that I have now. But thanks to research and advances in medicine, here I am and fingers crossed I will be for quite a while.’

When asked how Jacqueline’s organ failures have affected her, she responded: ‘I’ve tried to adopt a policy of doing that thing you want to do, right now.

‘When you’ve been ill like this, it wakes you up and you realise that you’re not invincible, you’re not going to carry on forever.

‘It’s shown me that actually you can get through really quite worrying times and with a bit of luck, it’s not as bad as you’d feared. I also think it’s helped my self-confidence and given me much more perspective.’

Jacqueline recently spoke out about her ‘weird’ upbringing and parents’ serial adultery, claiming it helped inspire her books and unique sense of style.

She told how her mother had affairs into her mid-seventies while her father, who also had numerous lovers, was a depressive and would ‘sulk for days’.

Speaking to Susannah Constantine on her My Wardrobe Malfunction podcast, the Tracy Beaker author argued having such ‘strange’ parents was ‘advantageous’ to her writing.

Jacqueline joined the BHF as part of the charity’s 60th birthday celebrations. Listen to Jacqueline’s and interviews with eight other celebrities with heart conditions on the BHF’s Ticker Tapes series, available now on all major podcast streaming services, or at www.bhf.org.uk/podcasts.