Dairy-free vegan choc ices, £230 face serum, and sex toys galore. JAN MOIR revels in her day in Goopland – and gets up close and personal (almost) with its High Priestess Gwyneth Paltrow

At last. After years of watching her films, buying her books, adoring her sunny elegance and lusting after her multi-mansioned, 500-thread-count, five-ply cashmere lifestyle, I am finally in the holy presence of Gwyneth Paltrow.

Here, at her very first Goop Wellness Summit in London, I am breathing the same air, drinking the same melon-flavoured water and gently being encouraged to buy a pot of the same £145 moisturiser that she uses.

At one point I even meet her face-to-face, as she looms into view by the coffee bar, radiating with nuclear-strength Californian vitality and sporting the most divine pedicure, in which her toenails are painted a perfect glossy black. Either that, or she is decomposing from the roots up. Oh, this too exciting!

‘Gwyneth,’ I begin, at the start of hopefully a long and deep conversation in which we discuss everything from the paprika cleanse to why she split up with Brad Pitt in 1997. 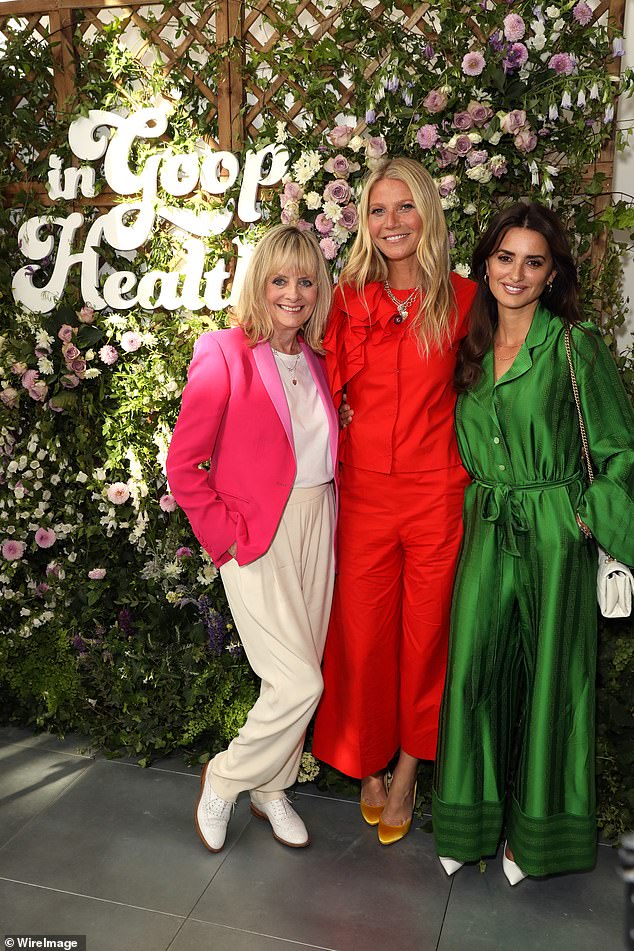 ‘Really sorry,’ she smiles, ‘but I can’t stop.’ She is sweet enough, though, to pause for a fumbling selfie, in which I manage to capture her honeyed radiance but cut off most of my head.

Curses! If only I had bought a £4,500 Weekender ticket to this event, not only could I have had a chat with GP — as she is known in Goopland — but enjoyed a Sunday morning exercise class alongside her, too.

Instead, I am slumming it with a £1,000 Saturday ticket, which buys me breakfast, lunch and snacks, plus beauty treatments and an exercise class with GP’s personal trainer Tracy Anderson.

It also includes reiki and breathing sessions, talks from nutritionists and psychologists in the Chat Room and the opportunity to listen to GP interview celebrity friends such as Twiggy and Penelope Cruz.

During her conversation with the former, Paltrow shocked some of the 250 Goopsters in the audience by swearing like a docker.

The outburst came when Twigs revealed that a film critic once wrote that she looked ‘like chewed-up chicken legs that have been posted through a letter box’.

‘What a c***!’ cried Paltrow as the audience laughed like maniacs. ‘What a d***.,’ she added for good measure. She later explained her sweary flare-up. ‘I never make it through the day without swearing. I almost did today.’

Well, I think. So much for the calming effect of lavender lattes and bee pollen sprinkles. Twiggy is a sparkling turn, talking of her own time in Hollywood, when Steve McQueen once asked her to dance and she was so embarrassed she turned him down.

Yet in an interesting window on to her own soul, Paltrow is keen on talking about the key to Twiggy’s happy 31-year marriage to actor Leigh Lawson.

‘How do you keep deepening a marriage for all that time?’ she asks. ‘What are the secrets?’ she needs to know. ‘How did your marriage impact the career choices that he made?’ she wheedles, perhaps thinking of her own marriage last year to television writer Brad Falchuk. ‘We do most things together,’ Twiggy tells her. ‘We like cooking food in our comfies and watching telly.’ 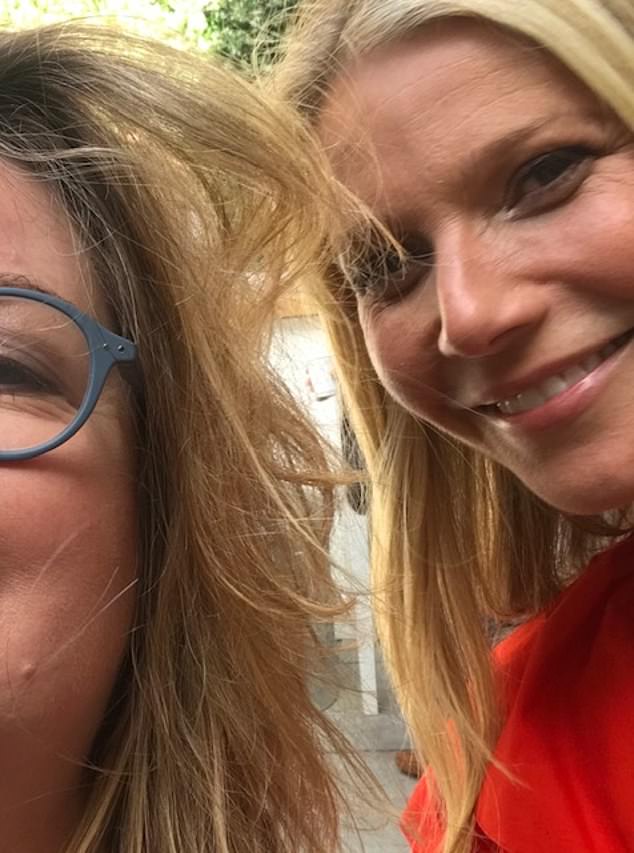 ‘Gwyneth,’ I begin, at the start of hopefully a long and deep conversation, but end up with this selfie

This Goop Health Summit is being held in a ‘wellness hub’ in West London, where we have gathered at GP’s behest to ‘create a new version’ of ourselves.

In the 90-degree heat during the hottest day of the year, we are not merely encouraged to drink water, but to ‘hydrate mindfully’ and to keep cool with dairy-free vegan choc ices, which are surprisingly nice.

Despite the steep prices there is no shortage of takers, with many who have flown in from across Europe and beyond just for the event.

Women with perfect bodies and Vuitton handbags float around in athleisure clothes or expensive summer cottons, clear-skinned and strong.

Being in this worshipful atmosphere is like being in a cult, as we obediently eat our coconut bacon, drink our oregano oil booster shots and do not question the wisdom of wearing an LED light mask to improve our complexions (green light for acne, red for ageing, yellow for silly billy).

With their toned arms and streaked blonde hair, a surprising number of these women strongly resemble Gwyneth herself, which only adds to the peak clique ambiance. The vibe? Just what you’d expect when a bunch of affluent chickadees used to extravagance and getting what they want hang out together for a day.

There is a certain wary friendliness, with the occasional flashpoint. In the reiki studio, a woman with ‘Have A Nice Day’ embroidered on her jacket is annoyed that someone has taken the place she had earmarked for herself. ‘That’s my cushion,’ she snaps.

In Tracy Anderson’s gruelling exercise class, there is annoyance that many cannot see the tiny trainer, who issues no instructions from her position at the top of the gym. We are just supposed to follow her moves, which are marvellously easy, but only if you happen to be a particularly bendy Olympic athlete.

As Tracy contorts her body into another hamstring-twanging position, I notice that under her strappy unitard she doesn’t wear a bra. Even her breasts are muscular and compliant.

Our day had begun at 8am with a breakfast of cashew nut porridge and granola garnished with edible flowers. One girl with a particularly vacant expression spends the entire time rearranging the nasturtium on her oat bowl (not a euphemism) and then taking photographs of it from every angle.

Coffee is served with a choice of five milks, including almond, but you have to ask for the cow version, which is hidden behind the counter like shameful booty.

Now wearing a pair of yellow stilettos instead of the Birkenstocks she had on earlier, GP gives an opening talk in the Chat Room, revealing how she started Goop in London in 2008, when she was married to Coldplay star Chris Martin. What began as a newsletter to friends full of recipes and tips is now a business worth more than £197 million and growing.

Goop has many detractors, who scoff at the brand as nothing more than an overhyped online platform dabbling in pseudoscience, New Age trinkets and gaspingly expensive clothes. Last year, the company had to pay Californian authorities a £114,000 fine for false advertising, including claims that vaginal jade eggs can balance hormones and even regulate menstrual cycles. I don’t even want to get into the Sex Dust, which you sprinkle into your nut milk (also not a euphemism) to spice up your libido. 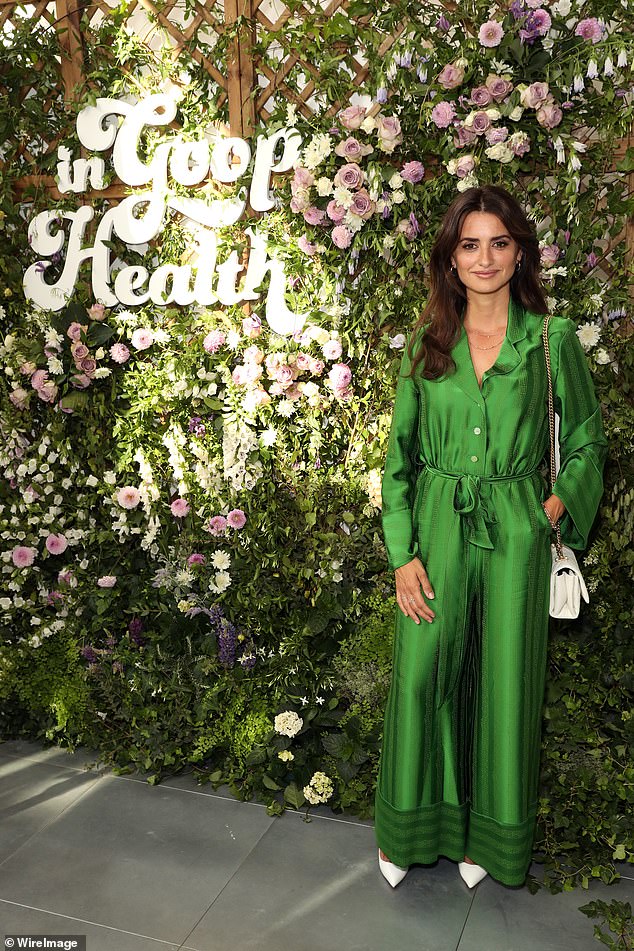 Yet devotees with large bank balances are delighted by Paltrow’s highly curated range of luxury goods, chosen and tested by experts to give what one happy Goop customer described to me as ‘the utter best of the best’. I know what she means. In the Goop shop at the Wellness Summit, there is a simple cotton tank top for £50, but it is made of the most beautiful fabric.

My skin feels sensational after having a facial by Dr Barbara Sturm, the dermatologist who invented the vampire facial (don’t ask) and is a favourite of both GP and Victoria Beckham. Yet her Hyaluronic Serum is a spendy but tempting £230. Stop it! That is the problem. Spend too long in the cult of Goop and soon you will start to believe, too.

To distract myself, I browse the Goop Sex section, which sells four differently shaped vibrators, respectively named The Millionaire, The Fireman, The Frenchman and The Tennis Coach.

Which one does Gwyneth personally recommend, I ask the assistant.

‘She recommends them all,’ is the reply.

She does? What a gal! Actually, The Fireman is by far the best seller because . . . do you know, I just don’t have time to get into that right now because Penelope Cruz has just joined GP in the Chat Room for the last event of the day.

To see such beautiful film stars up close is to be reminded that they are a race apart. Fine-boned and bedazzling in the dental department, they have the kind of burnished beauty that can pour itself down a lens and into a million cinemas without losing a drop of allure along the way.

But we are not here to talk about that: we are here to discuss their problems. At the age of 45, Penelope is going through the perimenopause. She tells us all how much she hates it when the men in her life, presumably including husband Javier Bardem, leave the dinner table when she wants to talk about her hormones.

‘Why do you think it is so taboo?’ wonders Gwyneth, prompting the conversation with more questions including: how can we bring more compassion into our lives, how do you protect your hormones, do you consciously try to bring self-care into your life, do you try to pick a moment every day free from guilt?

To be honest, I find all this excruciating. If you were sitting behind them on a bus, you’d get off at the next stop.

‘Life is hard, life is painful,’ nods GP as PC talks some more about her hormones.

Of course we all have difficulties, but Gwyneth and Penelope are two of the most privileged women on the planet. There they sit in their silks and diamonds, Gwyneth in her yellow Louboutins, Penelope in her white ones. They are blessed with wealth, talent and beauty, with handsome husbands and healthy children. Why are they so keen on giving themselves ailments they don’t have and embroidering everyday problems just to prove that they have suffered, that they are interesting, that they matter?

Afterwards over vegan smoked salmon canapes (actually made from carrot) and organic wine, my sour view of this onstage love-in is not shared by the Goops.

Katherine Busby, a businesswoman from Malton in Yorkshire, who is one of the Weekenders, found it empowering and empathetic.

‘Do you know,’ she says, ‘a girl sitting next to me hadn’t even heard of the perimenopause.’

Yes, I say, I think I saw her earlier, photographing her porridge.