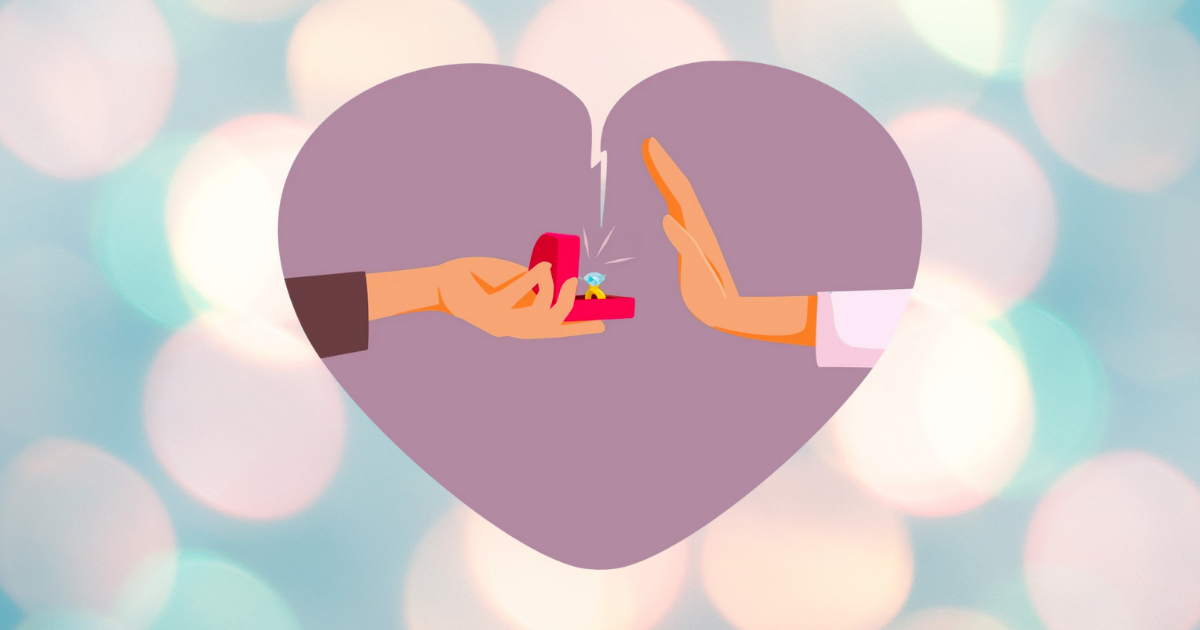 We’ve all seen those cringey videos of proposals gone bad: the sports game kiss cam one that comes as an unwelcome surprise, the extravagant flash mob that falls flat, or the down-on-one-knee moment that goes viral for all the wrong reasons.

From the outside we might assume that these question-poppers get a no in response because of the public nature of the proposal and the pressure to make a quick decision.

In reality, though, it’s a different story for every couple.

There’s an immense amount of stress that comes with proposing, which in heterosexual couples usually falls on the man. Is the ring right? How will you document it? And, god forbid, what if she says no?

For every successful marriage offer there’s going to be someone who doesn’t get the answer they expected, which may be because the relationship is struggling or because it’s just not the right time. That’s why gauging whether you’re on the right track is imperative if you want things to go smoothly.

And who knows engagement like jewellers, the very people who sell us the dream of putting a ring on it as well as the ring with which to do so?

With that in mind, we spoke to jewellers to find out their experiences with returned engagement rings. They know exactly what works when it comes to proposals, as well as what to avoid for the best outcome.

The wrong style or size

Daniel O’Farrell, founder and diamond expert at DC Jewellery tells Metro.co.uk: ‘Each year we will only have one or two rings returned out of the thousands of rings we create.

‘Even though we offer an industry leading 60 day money back guarantee, we offer in depth consultations to really gauge what the customer is after which minimises our returns.

‘Of the two returns we have had in the last year, one was due to the partner selecting the wrong stone shape and metal, and they later came back together to purchase the ring with her design input. The other ring was returned due to the relationship sadly breaking down.

‘While it is the only time this has ever happened, we once had to return a ring because the diamond was too big (the woman had particularly small fingers) and we exchanged it for a smaller, higher quality stone.’

Nightingale is York’s first ethical jeweller, offering a bespoke design service to hopeful proposers. They say the key to a happy engagement is mutual collaboration.

General Manager, Claire Beatson, tells Metro.co.uk: ‘In recent years we’ve seen a remarkable increase of couples choosing an engagement ring together. A surprise proposal might be the traditional route, but if the entire idea of getting married comes as a surprise then that can cause huge problems.’

As most of their customers are on the same page, Claire says returns are rare: ‘With all of our rings being bespoke, we don’t deal with many returns. We’ll accept them if the ring isn’t what we agreed on during the design process, but that occurrence is so rare that I can’t remember the last time it happened.

‘Often couples will come to us knowing they are getting married to design their ring together. It can certainly be the less risky option compared to the surprise proposal!

‘Also, we give customers the option of loaning a sample ring to ensure the fit and style is perfect. They can wear it for a few days and then send it back to us and the only thing they need to pay is a small holding deposit.’

Speaking of warning signs he’s learned over the years that suggest the answer may be a no, Daniel adds: ‘When I started in the trade 25 years ago, you would potentially fear this might be the case – however over the last decade, we have seen a big transition towards couples agreeing to get engaged and then shopping together.

‘When men do come in on their own they have often been sent hints via their partners’ Pinterest pages, or Instagram posts, and tend to have a much better understanding of what their partner is after.’

‘We also have one customer who comes in every year and upgrades their diamond for a bigger and better one,’ saysDaniel from DC Jewellery.

‘Additionally, we have a same sex couple who opted for eternity bands and they come back every year to add a stone to each others rings!’

According to Neil Dutta, Managing Director of Angelic Diamonds who create bespoke jewellery, just 5% of their rings – engagement or otherwise – are returned.

On the reasons they’ve heard why engagements didn’t go ahead, Neil tells Metro.co.uk: ‘A failed proposal is obviously one, especially if they have done a grand proposal and then have a massive fight after a few drinks.

‘There are other reasons like finding out their partner was cheating on them – we even had one fiancé who went to jail.’

When customers come in looking for a return because their partner said no – rather than because they want to change the style or size – Neil says it’s a ‘slightly more awkward conversation for us to handle in-store, but one that is usually the right decision for both parties further down the line.’

A breakup further down the line

Robert Cuomo, Managing Director at Hatton Jewellers tells Metro.co.uk: ‘We sometimes get bizarre stories from customers trying to return an engagement ring long after a purchase and the return policy has expired.

‘In these instances, customers can be very honest if they think this will heighten the chance of getting a long outdated return or exchange. Most often this will be a story of a breakup with way more detail than necessary.

‘Sometimes people just need to talk to someone, so we have, in these cases, had to border on being agony aunts as well as jewellers.’

Red flags the proposal answer may be a ‘no’

Robert Cuomo, Managing Director at Hatton Jewellers: ‘If the customer is overly interested in the return policy then we can presume that they are worried about the answer,’ says Robert. ‘Some customers actually say outright, “if my partner says NO can I return the ring”, sometimes in jest, sometimes not.’

Neil Dutta, Managing Director of Angelic Diamonds: ‘Everything we sell is made to order so typically it takes three weeks to make. If we get a customer request to change their order or even cancel the order, it’s not a good sign.

‘On rare occasions, we’ve experienced customers who have cancelled an order then a few days later placed the same order again!

‘Another red flag is when a customer doesn’t seem to have any idea of what kind of design their partner may like.’