Karl Marx’s daughter deserves a revolutionary biopic, just not this one

Eleanor Marx (Romola Garai) is a woman wrestling with the difficulties of practising what she preaches. Crusading socialist and fervent believer in the rights of women, she’s led a life dominated by the needs of her father, Karl, and the bad behaviour of her defacto husband, Edward Aveling (Patrick Kennedy). 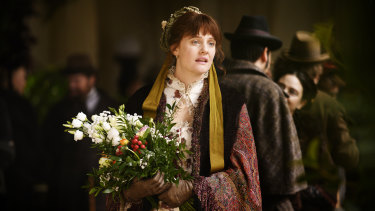 Romola Garai gives us the intelligence of Eleanor Marx, but lacks the vigour.

It’s a paradox and Italian writer-director Susanna Nicchiarelli has made a valiant but under-powered effort to understand it. From all accounts, Eleanor, Marx’s youngest daughter, was a spirited political prodigy whose childhood was spent absorbing and reflecting the intellectualism that shaped the Marx household.

Yet when she grew up, her admiration for her father led her to lay aside her ambitions to serve as his secretary. It was only after his death that she realised her talents as an orator and translator of Ibsen, a writer whose work found its echo in her life. Then she became a star – criss-crossing Europe and the US to spread socialism’s message all the way to the Wild West.

Garai’s Eleanor, with her melancholy gaze and soulful looks, give us the intelligence behind the high-wire act that Eleanor makes of her career, but she misses out on the vigour and the forcefulness that must have been necessary to keep the whole thing afloat.

Easier to comprehend is her seduction by the egregious Aveling. An activist and playwright who collaborates with her on her polemical writing, he looks to have all the credentials necessary to equip him as her soulmate. But he’s ruinously extravagant with the socialist movement’s funds and cheats on Eleanor with other women.

In response to friends who urge her to leave him, she remarks mildly that he’s like a child – that he has no moral sense. And Kennedy, who displays a calm indifference to everybody’s desires but his own, offers a clear illustration of what she means. When he becomes terminally ill, you could feel that justice has been done if it were not for Eleanor’s diligent attempts to nurse him back to health.

The film gives us a snapshot of who was who among the era’s leftist intelligentsia. Eleanor’s friend and fellow activist Olive Schreiner (Karina Fernandez) appears briefly, suffering after the bitter break-up of her affair with Havelock Ellis (Freddy Drabble). The affluent Engels (John Gordon Sinclair) twinkles benignly in the background, acknowledged for his generosity in bailing the Marx family out of their debts.

In an attempt to defuse the suggestion she’s made a conventional Victorian biopic, Nicchiarelli has revved up the soundtrack with music by the contemporary punk band Downtown Boys, who have also contributed their arrangement of L’Internationale. The result scored the soundtrack award at last year’s Venice Film Festival. Nicchiarelli has also given Garai a scene in which she gets the chance to cut loose under the effects of opium, but there’s still a whiff of the museum about the film. It’s gloomy, sepia-toned and very earnest.