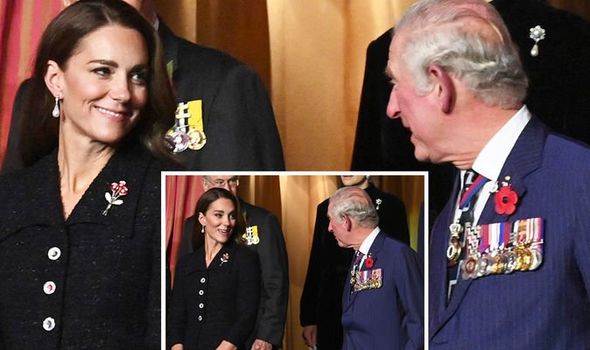 Kate Middleton and Prince Charles sat next to one another during tonight’s Festival of Remembrance at the Royal Albert Hall. Photographs of the royal box saw the Duchess of Cambridge and the Prince of Wales engaging in small talk. Express.co.uk’s body language expert Judi James discussed the two royal’s dynamic and suggested they were leading the display of “family unity”.

Judi said: “In the centenary year of the Festival of Remembrance and with the Queen sadly missing from the royal line up, it was Prince Charles adopting a central and rather up-beat note among the Firm, wearing a rather eye-catching tie alongside his medals and engaging both Camilla and Kate in conversation while the other royals stood around him in what looked like more somber and reflective poses.

“At The Duke of Edinburgh’s funeral we caught a glimpse of the strong bonds of affection between Charles and his daughter-in-law as Kate placed an arm around Charles to comfort him in his grief and here he seems to have singled her out for a chat, even turning his torso towards her despite the very formal-looking line-up.

“Kate’s response looks warm, with a very rounded-cheek smile and head tilt, making this look like an almost deliberate display of top-line unity from a family so affected by rifts and change,” she added.