Knowing and wickedly hilarious, Mungo sought to puncture the ego of the mighty

Mungo quit Canberra in 1988, his legend so established then that we don’t need to speak his surname even now.

He declared he couldn’t bear the idea of leaving the dear little old Parliament House that he had inhabited for so many years just to move to the grand new building on the hill. 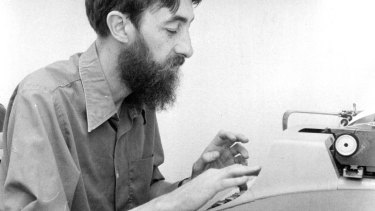 Mungo in 1979. To miss one of his madcap but insightful Nation Review columns in the 1970s was to leave you out of contemporary history’s loop.Credit:Fairfax Media

He felt the new place was cold and pretentious and had so many miles of corridors he’d get lost searching for targets, which is to say, politicians.

It would be a place, he predicted during a farewell speech at the National Press Club, that would be bad for both journalists and democracy.

I reported the speech at the time and felt he was over-reaching.

But, of course, he was right and it is a mercy he never had to witness daily the ease with which politicians learned to hide away in their flash offices, controlling the message with dull speeches and duller media releases, not to mention the dour fact that the non-members’ bar closed long ago.

Mungo moved north, not far from Byron Bay, where the sun could penetrate his long, lean frame.

But he never stopped writing his knowing and wickedly hilarious columns – The Byron Shire Echo was one of those lucky enough to grab him – that usually sought to puncture the ego of the mighty.

Occasionally, he returned to Canberra, usually at the behest of publishers wanting him to sell his latest book, and, being a kind soul who never forgot anyone and loved company, he’d suggest dinner.

Not much eating occurred – there was too much laughter and, anyway, Mungo preferred liquid sustenance, which enhanced rather than impaired his ability to summon endlessly fantastical anecdotes that illuminated decades of history. 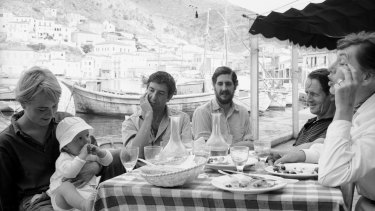 Who else could reminisce about living in a sort of artistic Beat commune on the Greek isle of Hydra during the early 1960s among literary expatriates like George Johnston and Charmian Clift, a young opium-smoking singer named Leonard Cohen and the beautiful Norwegian Marianne Ihlen who became Cohen’s muse?

But it was Mungo’s vast experience as a political journalist that most enthralled.

Mungo MacCallum: it was the most memorable byline in Australian journalism for longer than most can remember.

He began honing his craft in the time of Menzies, and only last week left an unprintable farewell for Scott Morrison, a man he could not abide, in his final column. 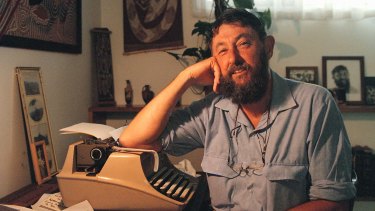 Mungo moved north, not far from Byron Bay, where the sun could penetrate his long, lean frame.Credit:Steve Holland

Along the way, this son of a long line of wealthy conservatives – the landed Wentworths and a string of scholarly Mungos – adored Gough Whitlam most of all. Whitlam reciprocated, fondly calling Mungo a “bearded descendant of lunatic aristocrats”.

Mungo arrived in the Canberra Press Gallery in 1969, writing for the pages of Rupert Murdoch’s broadsheet The Australian, determined, as he often said later, to “cut through the bullshit” of politics.

For the next 20 years, his real office was the non-members’ bar of the old Parliament House, where everyone from fellow journalists to political staffers and senior ministers drank, and if they were unwise enough to try to match Mungo’s thirst, let down their guard to their grief. 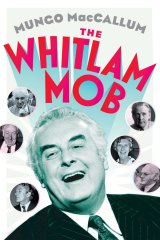 The Whitlam Mob, by Mungo MacCallum.

He wrote variously for The National Times, The Sydney Morning Herald, the ABC and others, but it was his work for the irreverent Nation Review that most earned him notoriety. To miss a madcap but insightful Nation Review column by Mungo MacCallum in the 1970s was to leave you out of contemporary history’s loop.

The ABC’s Kerry O’Brien, who retired not far from Byron Bay too, wrote last year in The Monthly that “The Mungo I met in Canberra in the early 1970s was all arms and legs and wispy beard, with a drink and a cigarette at a well-exercised elbow where possible, and always quick to laugh”.

Mungo had to have the last word, of course.

Eight days ago, he wrote that he could no longer continue working: “I am sorry to cut and run – it has sometimes been a hairy career, but I hope a productive one and always fun. My gratitude for all your participation.”

Some of those who had known Mungo but hadn’t seen his body failing him in recent years figured there would be a Dame Nellie Melba comeback; that his declaration simply had to be another naughty literary embellishment, a tease. 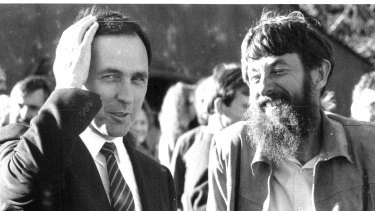 Paul Keating and Mungo at a garden party in 1987. It was Mungo’s vast experience as a political journalist that most enthralled.Credit:David James Bartho

But there was no exaggeration, no joke.

“It takes all my effort to breathe and I’m not managing that too well,” he wrote.

“And now my mind is getting wobbly – hard to think, let alone concentrate.

“So I am afraid there is not much point in continuing to push the rock up the hill. I shall retire to my Lazy Boy recliner and doze over the television watching (or not) old sporting replays, propped up by drugs, oxygen, and the occasional iced coffee. I am rapidly winding down."

And now he has gone.

Dead at 78. The lifespan doesn’t seem long enough to have imprinted itself so indelibly on generations of Australians.