Labor faced two policy flashpoints on Friday as it responded to confusion over its commitments to ending live sheep exports and paying superannuation on top of taxpayer-funded parental leave.

The live sheep export industry operates only in Western Australia, a state that is crucial to the opposition’s prospects at the May 21 federal election. 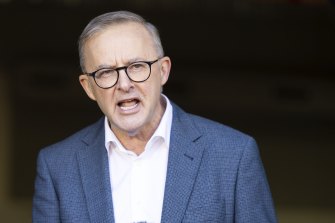 Labor leader Anthony Albanese has emphasised his commitment to work with stakeholders on the timeline of a ban on live sheep exports.Credit:Alex Ellinghausen

Labor went to the 2019 election promising to use federal powers to phase out shipments of sheep over five years amid animal welfare concerns.

However, that policy was altered ahead of this year’s election. It remains committed to ending the industry, worth $92 million a year, but has promised open-ended consultation with farmers and industry over the timing.

Asked about the federal party’s policy by media on Friday, WA Labor Premier Mark McGowan did not endorse it.

“I think the measures that are in place are appropriate at this point in time,” he told News Corp.

Following McGowan’s remarks, Labor leader Anthony Albanese emphasised his commitment to work with stakeholders on the timeline of the ban.

Agriculture Minister David Littleproud said there was policy confusion within Labor, and rural Australians could not trust the party to protect the interests of the agriculture sector.

“Live export will happen, whether we like it or not, from another country. But I believe we do it better than any other country in the world. That’s our responsibility as a good global citizen,” Littleproud said.

Labor is caught between the WA sheep industry and animal activists, who have campaigned for years for an immediate end to the trade.

Labor also confirmed it had dropped an explicit policy to pay superannuation on top of taxpayer-funded parental leave, but is not ruling out the move completely.

The Sydney Morning Herald and The Age revealed in March the Coalition had also ruled out the plan, which the superannuation sector and economists say would go some way to closing the gender retirement gap.

As recently as a fortnight ago, Labor was still saying it had not decided what to do about the policy, which it took to the 2019 election.

But on Friday morning, senior frontbencher Tanya Plibersek confirmed it was no longer part of the party’s promised plans, telling Radio National: “It’s not a policy that we’re taking to this election.”

A second senior Labor source, speaking anonymously to discuss internal deliberations, confirmed the party had decided not to make an explicit promise on super and paid parental leave.

However, multiple Labor figures have left the door open to revisiting the policy either later in the first term of a Labor government or after the next election. They view it as a good idea but note the economic situation is quite different to 2019.

Nearly 200,000 people – overwhelmingly women – who access the government’s paid parental leave scheme each year would receive a top-up to their retirement savings if the change was made.

Almost a third of the 20 electorates with the highest number of parents taking paid leave are key marginal seats, including the Liberal seats of Lindsay, Reid and Pearce, and the Labor-held marginals of Greenway, Lilley and Parramatta.

Albanese told reporters on Friday Labor was “being very measured” with what it promised.

“Would this be a good thing to do? Yes, it would be. It is something that we’ll examine in government,” he said.