Labor is within sight of a thumping victory that takes the party into majority government and drives the Coalition out of more than a dozen seats.

But the national swing to Labor is relatively modest in primary vote terms – an increase from 33 to 34 per cent since the last election – so the party’s fate depends on its ability to harvest preferences. 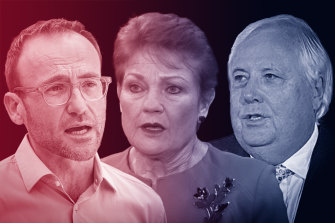 That means Labor’s success at this point, with three volatile weeks to go, is not only about its own performance but also about two other forces at work. First, the incredible gains for the Greens. Second, the shocking weakness of the Coalition.

The Greens have reached a rare height with an increase in their primary vote from 11 to 15 per cent in the latest Resolve Political Monitor. This is unusual compared to recent elections. The party gained 13.1 per cent of the primary vote at the 2010 election but slumped to 8.7 per cent at the next two elections before climbing back to 10.2 per cent in 2019.

Greens leader Adam Bandt has claimed the attention on “teal” independent candidates in this election could help the Greens elsewhere, such as in the Senate. Voters who like the independent campaigns may not have a “teal” in their seat and could be drawn to the Greens in other seats.

Resolve director Jim Reed says a proportion of the electorate has been moving against the major parties on issues like climate change.

“Many of them had been parking their votes with generic independents, but as we have removed that option from seats where they aren’t running, this vote has transferred to the Greens,” he says.

This reflects a crucial change in this survey compared to the one conducted two weeks ago. Put simply, this survey has asked respondents about their local independent candidates by name, in line with the ballot paper in their seats. If respondents do not have a “teal” candidate in their seat, it is not given as an option.

This explains why the primary vote for independents has fallen from 9 to 4 per cent nationwide.

We now know more than we did two weeks ago about the choice for voters. The Australian Electoral Commission declared the candidates on April 22 and this means the survey can ask voters about each option in their local electorate.

The Coalition, meanwhile, has slumped from a primary vote of 41 per cent at the last election to just 33 per cent in this latest survey, which suggests it will not have the strength to hold some of its own seats, let alone seize any from Labor.

Some of the Coalition’s support has leaked to Pauline Hanson’s One Nation and Clive Palmer’s United Australia Party and history suggests it does not all come back on preferences.

Scott Morrison will need preference deals with Hanson and Palmer, of course, but deals on the right will not be enough when the Coalition is losing support in the centre.

The problem for Morrison is obvious in the fact he lost ground as preferred prime minister and on personal approval ratings when he was campaigning relentlessly – almost frenetically at times – while Albanese was at home with COVID. Perhaps voters have simply had enough of him.

The margin of error in this survey is 2.6 per cent so the results offer a guide to where the electorate has moved rather than a precise GPS location for where it will be May 21. This is a poll, not a prediction. The last election showed that Labor can lose its lead in the final days of the contest.

Yet the results in this poll reveal a swing to Labor that is strong enough to shift a number of seats, including Bass, Chisholm, Boothby, Braddon, Reid, Swan, Longman, Higgins, Leichhardt, Robertson, Casey, Dickson, Deakin, Brisbane, Lindsay and Pearce.

Morrison is running out of time for another miracle.