Cazzie David was ‘screaming in agony’ after Pete Davidson breakup

It seems that Alan Dershowitz’s ties to the Trump Administration have made him persona non grata among the Martha’s Vineyard elite — including Larry David.

A Page Six spy spotted the Harvard Law professor — who was once, like David, a fully paid-up member of the Democrat cool kids — bumping into the comic on the porch of the island’s picturesque convenience store and community hub Chilmark General Store, and found their exchange so bizarre that they “wrote it down to remember it.”

Page Six strongly recommends that readers enjoy the following while playing the “Curb Your Enthusiasm” theme tune in their heads.

Dershowitz: “We can still talk, Larry.”

David: “No. No. We really can’t. I saw you. I saw you with your arm around [Former Trump Secretary of State Mike] Pompeo! It’s disgusting!”

Added the stunned source, “Larry walks away. Alan takes off his t-shirt to reveal another t-shirt [underneath it] that says, ‘It’s The Constitution Stupid!’.”

We’re told Dersh “drove off in an old, dirty Volvo.”

Reached for comment, Dershowitz confirmed the exchange and told us that he and the “Curb” creator had been friends for many years until the lawyer began working with the Trump camp.

He even claimed that he helped get one of David’s daughters into college and had once represented him pro bono in a legal dispute he had on the Massachusetts island, where they both spend their summers.

He told us that he’d greeted David at the store, but that the comic had walked away from him — which is when he said, “We can still talk, Larry” and our spy picked up the dialogue.

Dershowitz told us that, while it might sound on paper like an awkward scene from “Curb,” “it wasn’t funny at all.”

The professor claimed that David “screamed” and “yelled” at him, and that his face turned bright red. “I was worried that he was going to have a stroke,” said Dershowitz.

He pointed out that on the occasions he has been snapped being affectionate towards Pompeo — who studied at Harvard Law in the early Nineties — it’s not because he’s a blind supporter of the Trump Administration, but because he admires the former Secretary of State’s work on peace in the Middle East.

In fact, he says, he worked with Pompeo on his department’s policy regarding Israel and Palestine and has been invited to the White House by both the Trump administration and the Israeli government to celebrate it. And he said he’s disappointed that David can’t understand why he’d work with any administration on peace for Israel, regardless of who was occupying the Oval Office.

“While he was writing bad jokes, I was helping to bring about peace in the Middle East,” Dershowitz told us, “What has he done?”

“Larry is a knee-jerk radical,” Dershowitz told Page Six, “He takes his politics from Hollywood. He doesn’t read a lot. He doesn’t think a lot.”

“It’s typical of what happens now on the Vineyard,” he added later, “People won’t talk to each other if they don’t agree with their politics.” 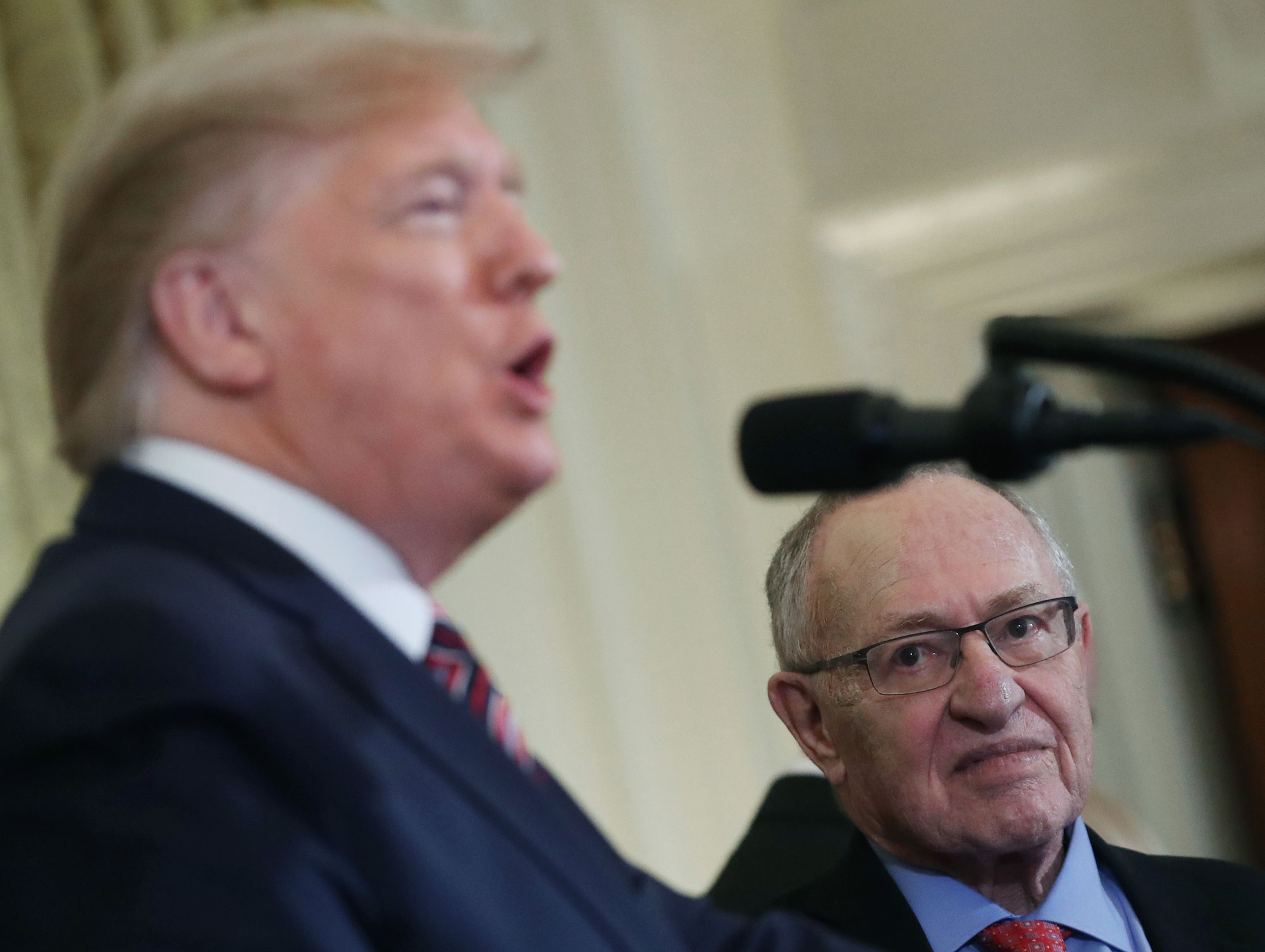 Dershowitz said that David isn’t the only friend he’s lost — particularly after he defended Donald Trump over his first impeachment when the President was accused of trying to arrange a quid pro quo with the Ukrainian government.

“That’s the price of principal,” he said. He later said that his “principals require” that he defend the Constitution, and that he felt that the first impeachment of Trump was unconstitutional.

He told us that that’s why he removed his second t-shirt after the run-in to reveal the one that read “It’s the Constitution, Stupid!,” which he said his wife bought him because so many people misunderstood his decision to defend Trump. (He said he was wearing two t-shirts at the time of the incident because he was on his way to meet a friend when he ran into David, and he had been planning to give the outer t-shirt to his pal as a gag gift.)

“I’m a liberal Democrat and I voted for Biden just as enthusiastically as Larry did,” Dershowitz told us.

“[David] is guilty of contemporary McCarthyism,” Dershowitz said, “McCarthy would have been proud of him.” He said that in the Fifties, political witch-hunter Joseph McCarthy “went after lawyers who represented people he disagreed with.”

Dershowitz told us that he wants to “extend a hand of friendship” to the “Seinfeld” co-creator “if Larry wants to talk about any of this.”

He said, “I won’t get into a screaming match with him. If he wants to scream, he’ll have to scream alone.”

Reps for David didn’t immediately return our requests for comment.