Legendary ‘mermaid’ resurfaces in all her glory

The subject of a new production in a Sydney pool, Kellerman overcame rickets as a child to tour the world publicising her talents in stage shows, mobile swimming tanks, underwater ballet films, cross-channel marathons and bold near-naked displays onscreen. 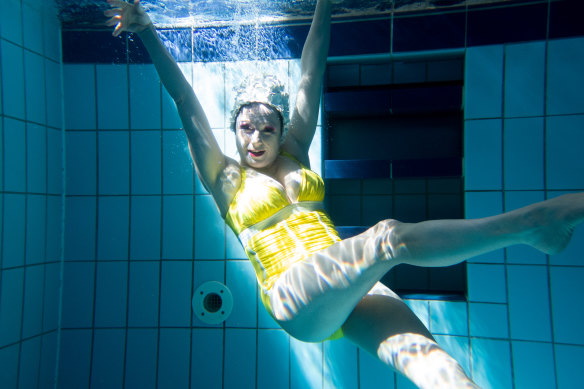 Making a splash: Christa Hughes plays the multi-talented Annette Kellerman in and out of the pool.Credit:Edwina PIckles

But she is perhaps most famous for eschewing the cumbersome female woollen bathing dresses of the 1900s for a fitted knee-length one-piece suit. Her appearance at a Boston beach in 1907 sparked an alleged arrest and international uproar. Kellerman gave not a toss.

“I want to swim,” she said, in response. “And I can’t swim wearing more stuff than you hang on a clothesline.”

The world’s first “aqua queen” is now being celebrated in Marrickville Mermaid, a theatre song cycle written by Hilary Bell. Starring Christa Hughes, it is being staged at the inner west pool named after Kellerman, the Annette Kellerman Aquatic Centre.

An undated image of Kellerman in her revolutionary swimsuit.Credit:

Bell says she and musical collaborator Luke Styles were struck by Kellerman’s talent for inventive self-promotion more than a century ago. 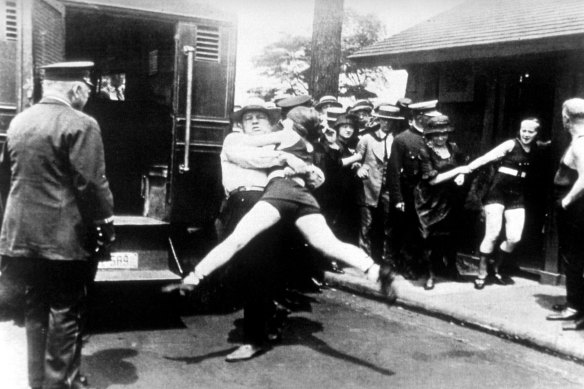 Annette Kellerman and friend nabbed for “indecent exposure” at a Boston beach in 1907.Credit:

“She understood branding, creating publicity and using the media to promote her own story and career,” Bell says. “They’re now so much part of our culture but were very new at the time.

“It’s possible she went to Revere Beach in Boston deliberately and strolled along in the revealing bathing suit she’d invented.”

Raised in Marrickville, Kellerman’s 10 Hollywood movies, in which she did all her own stunts, broke box office records, prompting Esther Williams’s portrayal of her in 1952 Hollywood biopic Million Dollar Mermaid. In 1912, Harvard professor Dudley Sargent declared her the “most perfect woman of modern times”.

Kellerman’s lifelong message was promoting the benefits of fitness for modern women.

“Swimming for women is more than physical,” she said in 1915. “It can engender self-confidence and, in the art and science of swimming, a kind of equality, even superiority, to that of men.”

She did not, however, call herself a feminist. 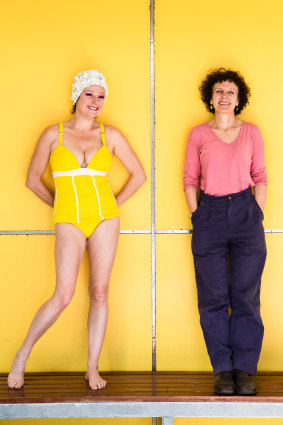 “She advocated that women exercise and look fantastic so they could keep their husbands,” Bell says. “Her independence, career, the choices she made, they were unheard of at the time. She was the proto-feminist but refused to call herself one.”

Hughes, who sings Bell and Styles’ songs in and around the aquatic centre’s main pool, is proud to play Kellerman.

“She’s a true, fearless role model,” she says. “Her drive and ambition was frowned upon for women. But she swam marathons and jumped off cliffs and lighthouses rather than just pouting.”

After decades as an international superstar, diving from 18-metre cliffs with bound hands and legs for film roles, tap-dancing, wire-walking, playing the accordion and inventing a monocled drag act for her vaudeville shows, Kellerman returned to Australia to live in Queensland. She died in 1975 aged 89 in modest circumstances.

“She did a lot to marry the Australian identity with being sporty and plucky and giving the finger to the class system,” Bell says. “I don’t think she knew fear.”