Victorian Liberals will decide the parliamentary fate of hard-right MP Bernie Finn at a party room meeting on Tuesday morning.

Finn’s colleagues will vote on whether to expel the upper house MP after he said abortion should be banned in the state, even for rape survivors. 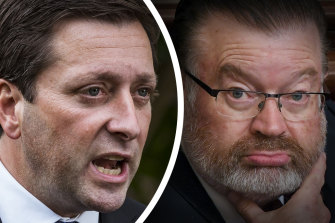 Opposition leader Matthew Guy and his supporters were backing the motion because of “repeated actions detrimental to the party’s ability to stand up for the interests of Victorians”, Guy said last week.

If the vote is successful, the controversial MP is expected to move to the crossbench.

Finn, a Christian conservative, has been warned about his social media posts.

He has previously compared Premier Daniel Andrews with Hitler, described a former female staffer as a rat, shared several pro-Trump posts during and after the Capitol Hill riots in 2021, and made inflammatory comments about Andrews and a goat in a public toilet.

In October last year, after Finn likened Victoria Police to the “modern incarnation of the Despot’s militia”, Guy warned all Liberal MPs that they risked expulsion if they displayed “bad behaviour” online.

Finn resigned as opposition whip earlier this month after Guy demanded he be part of the team or quit.

The ultimatum came after Finn posted on social media he was “praying” for abortion to be banned in Victoria – including in the case of sexual assault – following a leaked draft opinion from the US Supreme Court indicating that the Roe v Wade decision, which legalised abortion in the US in 1973, could be overturned.

On Monday, he told radio station 3AW he had been approached to join other parties and would be considering those options.

Finn has been a member of the Legislative Council since 2006. Before that, he was the member for the now-abolished lower house seat of Tullamarine between 1992 and 1999.