Loki Revealed To Be Bisexual in Disney+ Series, Director Confirms

“I know this is a small step but I’m happy, and heart is so full, to say that this is now Canon in [the] #mcu,” tweeted director Kate Herron.

The latest episode of “Loki” revealed the Marvel character is bisexual.

In the middle of Episode 3 of the Disney+ series, Loki (Tom Hiddleston) and a woman who is believed to be Lady Loki, but is known as Sylvie (Sophia Di Martino), have a conversation about their past love interests. 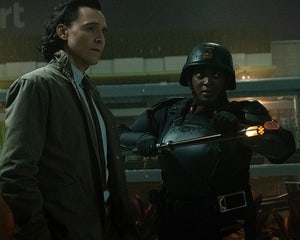 Loki Recap: Loki Finally Comes Face to Face with His Evil Variant — and It's a Familiar Surprise

“How about you? You’re a prince. Must have been would-be-princesses. Or perhaps another prince,” Sylvie said to Loki, who replied, “A bit of both. I suspect the same as you.”

Alongside a screenshot of Loki and Sylvie’s conversation, Herron wrote, “From the moment I joined @LokiOfficial it was very important to me, and my goal, to acknowledge Loki was bisexual. It is a part of who he is and who I am too.”

She added, “I know this is a small step but I’m happy, and heart is so full, to say that this is now Canon in [the] #mcu.”

Loki is officially the first lead LGBTQIA+ character to be featured in the MCU. It was previously teased that Loki is also gender fluid.

The weekend before the “Loki” premiere aired on Disney+, Disney released a teaser that showed Loki’s TVA case file — and fans noticed Loki’s sex was labeled as “fluid,” which has been featured in the comics.

Herron reacted to eagle-eyed fans uncovering Loki’s gender fluidity in an interview with TooFab. Check it out, here.

“I know how many people identify with Loki in particular and are eager for that representation, especially with this character,” Waldron said. “We worked really hard.”

“It’s always been there in the comics for some time and in the history of the character for hundreds, if not thousands of years,” Hiddleston shared.

Fans will continue to see more LGBTQIA+ representation in Phase 4 and in the future of the MCU. Marvel’s “Eternals,” which hits theaters this November, will feature the first openly gay character in an MCU film, Brian Tyree Henry’s Phastos.

Meanwhile, back in 2019, Tessa Thompson announced that her character, Valkyrie, who became the ruling King of Asgard at the conclusion of “Avengers: Endgame,” will be searching for a queen to rule with her in “Thor: Love and Thunder.” Marvel head Kevin Feige also confirmed Valkyrie will have an LGBTQIA+ storyline in the film.

New episodes of “Loki” come out every Wednesday on Disney+