Love is a lie, so The White Lotus chooses chaos

But, of course, this is Mike White’s world, and if we’ve learned anything about The White Lotus creator, it’s that nothing is ever as it seems. 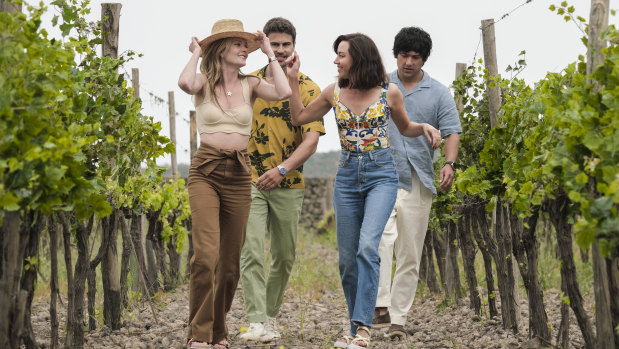 Is love in the air or is it something more sinister? The White Lotus ups the shock value in episode five.Credit:HBO/Binge

With that in mind, perhaps “That’s Amore” might be reframed as a question – “That’s Amore?” – as we begin to examine how truly twisted the definition of love can be.

The episode picks up the day after the night before, with Lucia and Albie in bed. As everyone suspected, Albie (Adam DiMarco) is oblivious to the transactional nature of their exchange so when Lucia (Simona Tabasco) names her price (2000 Euro for overnights), he panics.

“I’ve never done anything like this before,” says Albie, the look of love quickly replaced by the look of shame. Lucia half-heartedly lets him off the hook – “It’s ok, you don’t have to pay,” – but as we also know, Albie is a good guy, and the thought of exploiting a sex worker is at odds with his entire existence. 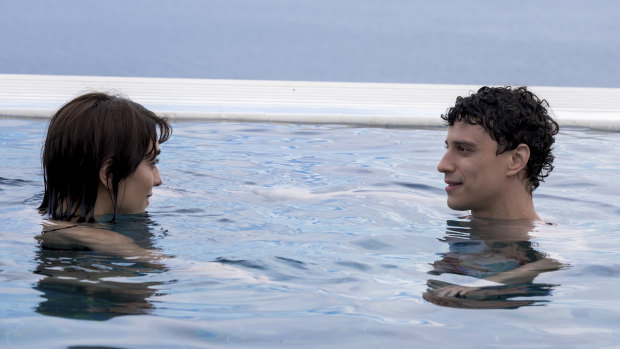 Can Albie keep his head above water, or will falling for Lucia see him sink to the bottom.Credit:HBO/Binge

“There is a man who will ask me for the money, he is crazy,” she says, as Albie’s eyes widen. He promises to rush to the bank, but not before admitting to Lucia that he “really likes” her.

Lucia responds in kind, but you get the feeling that she understands better than anyone that, when weaponised correctly, love is more powerful than lust. This is confirmed when she meets up with Mia for a debrief and promptly sums up the situation: “This boy is rich and innocent.”

Speaking of rich and (relatively) innocent, Ethan has awoken to find the condom wrapper Harper (Aubrey Plaza) purposefully left out for him. He bumbles an explanation that essentially amounts to: Cameron had sex, I just watched, but also we did party with two beautiful Italian escorts.

Ethan (Will Sharpe) expects to be in the clear, even telling Harper, “you should feel good about this,” but in her eyes, her husband is far from an innocent bystander. “I was gone for one night, and you did molly with hookers,” she says. That is certainly not amore.

The gravity of this information causes Harper to choose chaos for the day. She is done playing nice (or as nice as she can manage) and instead reverts to ultimate antagonist mode.

Over breakfast, Cameron (Theo James) suggests a day of wine tasting, to which Harper responds: “Maybe we can find some molly and really rage.”

Seeing the supremely confident Cameron knocked off kilter by the realisation Harper knows about the molly is wonderfully satisfying, but that’s just the beginning.

Later in the day, fuelled by several glasses of Etna Bianco, Harper asks the boys if they’ve ever slept with the same girl. Ethan uses this as a rare opportunity to score a win over his alpha-made pretend-friend, explaining that Cameron used to try to sleep with anyone he (Ethan) had a crush on. 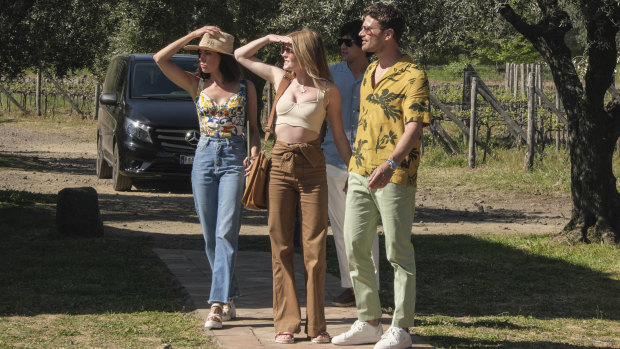 This foursome is a ticking timebomb.Credit:HBO/Binge

“You have a bad case of mimetic desire,” he says to Cameron. “If someone of a higher status than you wants something, it is more likely that you will want it too.”

Under siege, Cameron confronts Ethan, who confirms that Harper does indeed know about all his transgressions. While this might’ve been an opportunity for Cameron to have a vulnerable mea culpa moment with Harper, he opts to hit her on her because, well, we are all choosing chaos!

When the boys disappear to find some cigars, Harper reasserts herself, admitting to Daphne (Meghann Fahey) she thinks something happened while they were in Noto. Harper expects a reaction, but Daphne’s made it obvious that her version of love is the opposite of unconditional; it comes with multiple conditions, all of which she has learned to accept.

“If something did happen, just do whatever you have to do to make yourself feel better about it,” explains Daphne, who launches into a monologue about her sexy personal trainer who has blonde hair and big blue eyes.

She then offers to show Harper a picture of him, but instead, we see a photo of her blonde, blue-eyed, cute child. “Whoopsie,” she says as if it were a mistake.

It’s an odd moment – What is Daphne admitting to exactly? – but also on brand for this perplexing foursome. From the moment we met them, they’ve been a ticking timebomb, and with two episodes left, it’s hard to tell when the inevitable explosion will arrive or if it will arrive at all.

By this point, even the most hopeless romantic might be convinced that love is a construct, but just in case, White hammers the point home, shocking us one final time via his most reliable vehicle: Tanya (Jennifer Coolidge).

She has spent much of the episode swanning around Quentin’s luxe Palermo villa, revelling in the generosity of her newfound friends. “These are some high-end gays,” she whispers to Portia (Haley Lu Richardson).

Amidst all the drama of our other guests, Quentin (Tom Hollander) has felt like a breath of fresh air, a fun-loving gay man who enjoys nice wine and cares deeply for his nephew, Jack (Leo Woodall). 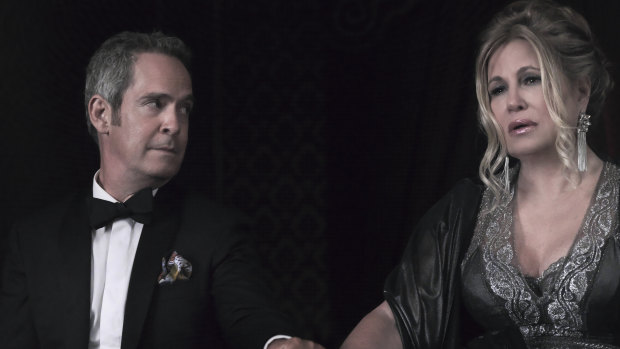 Two tragic figures, one unlikely friendship? Quentin and Tanya have developed their own love of sorts. Credit:HBO / Binge

Following a night at the opera, Quentin reveals to Tanya that he has only ever been in love once, an unrequited affair with a straight man. “Love has never been my Achilles heel; it was always beauty,” he admits. It feels ominous, but doesn’t everything in this show?

Later in the night, Tanya is awoken by the unmistakable grunting of sex, and she follows the noise until she reaches its source, inching the door open to see Jack having sex with his “uncle” Quentin.

Now that’s amore than any of us bargained for.