Lunch with conductor Simone Young: Time for a big fish to come home

Simone Young acknowledges that, even by her own standards, her schedule is particularly insane.

After collecting a coveted European Cultural Award at a gala occasion in Vienna in October, she closed a new production of A Midsummer Night´s Dream with the city's State Opera and travelled for concerts in Madrid for which she had to learn from scratch the Khachaturian Flute Concerto.

After dates in Manchester, England, Young drove straight to Heathrow Airport for a flight to San Francisco, where she had 24 hours to get over jetlag before rehearsing Richard Strauss' Metamorphosen and the first act of Richard Wagner's Die Walküre. Wagner and Strauss is her schtick. 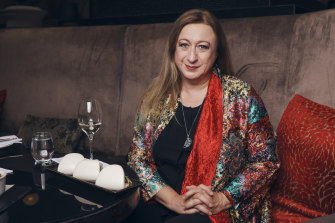 Simone Young says that in Germany and Austria orchestra rehearsals are built around lunch as the main meal of the day.Credit:James Brickwood

She's here for three dates with the Sydney Symphony Orchestra before heading to Tokyo for five performances of Beethoven Symphony No. 5, then back to the Austrian capital. January and February are a blur of concerts in Minnesota, Cincinnati and New York, Helsinki, Hanover, Berlin, Barcelona and Paris.

"That's 10 different programs in eight weeks on one, two, three, four continents," Young says. "Even for me, that is completely nuts. I don't usually do that."

We are at The Cortile, in the InterContinental Hotel, on a rest day between the SSO concerts. It's a secret to all but a chosen few that Young has accepted the esteemed position of Chief Conductor of the SSO from 2022, an announcement she has been sitting on for six months. Young becomes only the third Australian, and the first woman, to take the role in the orchestra's 87-year history. 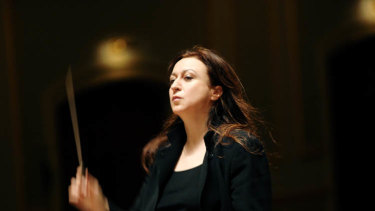 Simone Young’s new role marks a triumphant return to the podium of her city of birth after two decades building an international career.Credit:Monica Rittershaus

Her new role marks a triumphant return to the podium of her city of birth after two decades building an international career that has taken her to most of the major opera houses and symphony orchestras around the world.

Ten of those years were spent as artistic director of Hamburg State Opera, and chief music director of the Hamburg Philharmonic. Since 2015 she has been in demand as a maestro for hire.

The strategic vision of SSO's newish chief executive Emma Dunch played a big part in her decision. So did the chance to be first to conduct the SSO in the acoustically refurbished Concert Hall of the Sydney Opera House. 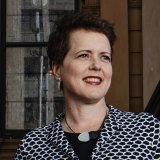 "My first symphonic experiences were in that Concert Hall as a schoolgirl sitting in the audiences in the old meet the music programs on a Wednesday night at 6.30pm," Young says. "I was born in 1961, I spent the '60s watching that place being built. I grew up in Manly. Dad worked here in the city and we'd often take the ferry together."

It is, she feels, the "right fit at the right time".

Did Dunch approach Young? "Yes." Did she beg? "Didn't have to." Young lets out a long laugh.

A precocious talent, Young made her debut at the Sydney Opera House conducting The Mikado and The Little Mermaid at the age of 24. Named 1986 Young Australian of the Year, Young went on to debut with the SSO 10 years later in 1996.

That first program was a potpourri of early musical influences, including works by her professor of composition, Don Banks, who used to give her lessons on the first floor of the InterContinental Hotel when it housed the composition and musicology departments of the Conservatorium of Music.

Young gazes to the upper floors. "Every time I come to this hotel I'm taken back to my student days."

We are too late for lunch and too early for dinner, so Young orders a plate of Peking Duck Bao buns and a glass of Penfolds Riesling.

In Germany and Austria, rehearsal schedules are built around lunch as the main meal, Young tells me. It's a routine that works for a notorious insomniac like Young, who takes afternoon naps before concerts and sleeps in no more than five-hours block.

"I certainly can't sleep for at least two hours after a show and if it is a long or very stressful occasion like a major debut or a major symphony for the first time or a Wagnerian opera that lasts six hours, the wind-down time is relative to the amount of adrenalin coursing through your system." 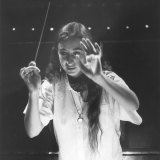 Tonight she is catching up with her husband Greg Condon's brother and his wife for tapas. Young and Condon met as teachers in St Ignatius' College, Riverview, and bonded over a mutual love of foreign languages. Not content to simply play music, Young studied French and German to read the literature that inspired the composers she adored.

It hints at a certain degree of obsessiveness. ''People have been telling me to slow down since I was about eight," Young admits.

The celebrated conductor has had to take that advice more seriously this year. "I'm getting older, I think I have to," she says. "I had a bad fall in September and sprained my ankle and possibly for the first time in my life, I actually saw the treatment right through for the length of time I was supposed to, with the result that the ankle has fully healed and a knee injury from three years ago when I didn't do as I was told is still niggling."'

Conducting an orchestra, bringing the combined forces, powers and talents of the musicians to transmit musical ideas to the public, is both physically and emotionally demanding.

There is a language of gesture that every orchestra understands, akin to the rules of the road that motorists observe, Young notes. Put the same piece of music into the hands of five different conductors and the same orchestra, however, and its intrinsic 'sound' will vary.

There is something "slightly mythical, slightly mystical about how a change of angle in somebody's hands or the way somebody's arms move creates a particular kind of response from a body of musicians," Young says. "It's nonverbal communication of an idea."

In rehearsals, Young juggles three tracks in her head. The ideal version runs alongside the played reality and a checklist of tweaks and enhancements. There is no room for anger in a rehearsal room, she says.

That mental discipline to think ahead was "something I wasn't very good at when I was younger, even 20 years ago". "I would often react impulsively, negatively when something went slightly awry, and that actually does nothing but communicate more nervousness to everybody."

In performance, it's a different story. "Having the emotional courage to be open and honest with the group of people you barely know − that's probably the hardest emotional thing about being a conductor."

The buns are served, and we are making steady progress on the wine. Now retired from teaching, husband Greg, she says, is a great baker and their two daughters were all brought up on Vegemite. Yvann is now deputy director of finance at the Lord's Cricket Ground and has two preschool daughters on whom Young dotes. Younger daughter Lucie is a harpist and studied music at King's College London.

"We are a family of unrepentant alphas," Young deadpans.

I'm one of the great unwashed whose early education in classical music amounted to my parent's vinyl collection of Johann Strauss' romantic waltzes, Beethoven's dramatic Symphony No 5, Mozart's Eine Kleine Nachtmusik and recordings of Percy Faith's A Summer Place.

Young and Dunch want us all. Reaching out to a younger, broader demographic is the El Dorado not only of the SSO but all major performing arts companies the world over. ''Just in terms of ticket sales everybody's aim is to make out of the non-concert-goer the single ticket-buyer, to make out of the single buyer the subscriber, and to make out of a subscriber a patron, that's the ladder," Young says.

There's more at stake than sales or survival. "Classical music shouldn't be a soporific for the intellectually pretentious," Young says. "Let's scrap the classical music title for one minute. Good music, music of quality, should elevate, inspire, console, excite. It can push every emotional button, and that's just for starters."

Classical music shouldn't be a soporific for the intellectually pretentious.

Music has been a vital part of her life since the age of five when she began playing her grandmother's piano. 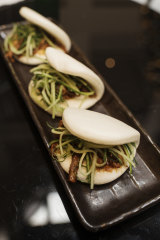 "The deal was always in the family that we would keep the piano for as long as I was interested. If I lost interest we'd sell it and they'd use the money for something else."

Neither parent played but her lawyer father had a great love of literature and educated himself in classical music through the ABC. It was he who brought home sheet music to Claude Debussy's La fille aux cheveux de lin for the young protege when she was six and it remains today one of Young's favourite pieces of music. 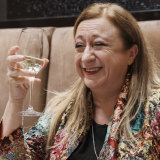 Nevertheless, there was an expectation that Young would follow her father into law. ''It is still to the great amusement of my school [Monte Sant’ Angelo Mercy College in North Sydney] that in my final year I won the school prize for literature and not for music."

Such were her abilities that while sitting the HSC − French, Latin, double English, Science, she dropped maths because she found it a little dull − she played in orchestras of four amateur and school musical productions.

From the Conservatorium of Music she joined Opera Australia as repetiteur, the title given to the person responsible for coaching singers and playing the piano for music and production rehearsals.

The late Stuart Challender, the outstanding musician and conductor who was last Australian to hold the post of Chief Conductor of the SSO, was a mentor.

He said to Young: "Ýou are a big fish in a small pond. Go to Germany."

In the late 1980s, Simone and her husband did just that and she took up a position assisting James Conlon, the conductor at the Cologne Opera, eventually coming to work alongside the legendary conductor Daniel Barenboim.

"Daniel's philosophy is an artist should not be simply limited to their area of expertise; they should continue to expand their knowledge and interest in philosophy, in literature, in art and politics and he's been quite inspiring in the development of young artists. "He's never taught any of his assistants but he's discussed music and musical thought and artistic thought with us and that's much more interesting."

In 2000 she conducted the national anthem at the Olympic Games in Sydney and then returned in 2001 to take up the position of music director with Opera Australia. Two years later it was announced that Young's contract would not be renewed over differences in artistic vision and budget.

"There are always so many elements in play when things go pear-shaped and I have to say these days I look with wry amusement upon the fact that just about 80 per cent of conductors believe their positions to be in a state of high dudgeon," she reflects.

"Possibly it's the nature of the beast. I have great affection for the organisation and its singers. It's one of the hardest-working arts organisations in the world. The opera scene is more and more challenging everywhere and I have no recipe to fix that." 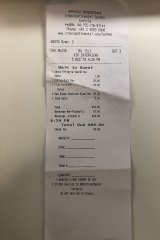 Her 10 spectacularly successful years in Hamburg State Opera, in which she left the company with a significant surplus, has put to bed any hard feelings.

The appointment as SSO's Chief Conductor is more icing on the cake. "I'm possibly in the only profession in the world in which at age 58 I can still say that my best years are still ahead of me."