Sydney’s latest piece of public art is hard to miss. The massive 11-metre construction, with elegant curves fabricated from glass-reinforced concrete and aluminium and intricately lined with blackbutt, is a striking addition to the rapidly developing South Eveleigh precinct.

The work, made by artist and architect Chris Fox, comes with an equally lofty name: Interchange Pavilion. 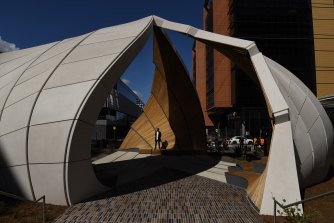 Whether that moniker sticks is another matter. One fan approached Fox after the launch on Tuesday to say how much he admired the structure, adding that locals had already dubbed the piece the “Broken Egg” – in the same irreverent tradition that brought us The Toaster and The Coathanger.

“That’s good that has already started and people are already engaging,” said Fox, who is also behind Interloop, the much admired work suspended above the York Street escalators at Wynyard Station. “It’s quite lovely when people come up with affectionate names or names that might mock the work.”

Fox first started thinking about his new work some two years ago when developer Mirvac called for designs for a pavilion on the old industrial site.

“They gave us a huge amount of information about all the amazing stories from around the site,” Fox said. “There were up to 5000 workers here and it was one of the biggest employers of Indigenous workers who came from all over the state and the country. It was a matter of thinking about how a project could talk about all those different journeys, all those different stories.”

Fox settled on the physical metaphor of the railway line switch to encapsulate the concept of stories and lives colliding, diverging and joining together. The rails set into the ground at the base of the work peel off to become the walls and roof of the work.

“Each rail represents a different journey,” said Fox, adding that some of the rails point to the sky while others combine to form the apex.

He’s aware of the irony of creating a meeting place at exactly the time when meeting together is so fraught.

“We’re all trying to navigate this [COVID-19] in our own way and we are all meeting in altered ways, some augmented and some physical," Fox said. "This pavilion is a big open-air space so there is potential for it to be appropriate for this time.”

As to how people will use his creation, which features a number of inviting places to rest, Fox said he could imagine them sitting quietly, eating lunch or maybe even attending events.

Regardless, he said, it was no longer up to him.

“It’s not mine now – it belongs to the public."