A man who asked his bikini-clad girlfriend to cover up her body hair at a public pool has sparked a debate over whether you should raise concerns about your partner’s dress sense.

Writing on Reddit, the anonymous man, from the US, explained that they were visiting the Encore beach club in Vegas when he advised his girlfriend to wear either shorts or dark bikini bottoms to avoid bringing attention to her unshaven area.

During the conversation, he mentioned that the beach club is known for having a dress code and is ‘notorious for only letting in ‘attractive’ people.

The man went on to say how they pair then argued as she likened her choice of not removing or covering her body hair to not shaving hairy legs.

The thread received quite the mixed response, with many accusing the man of trying to control how his girlfriend dresses.

‘I don’t think you can police her body but I don’t want to see anyone’s pubes personally,’ wrote one. 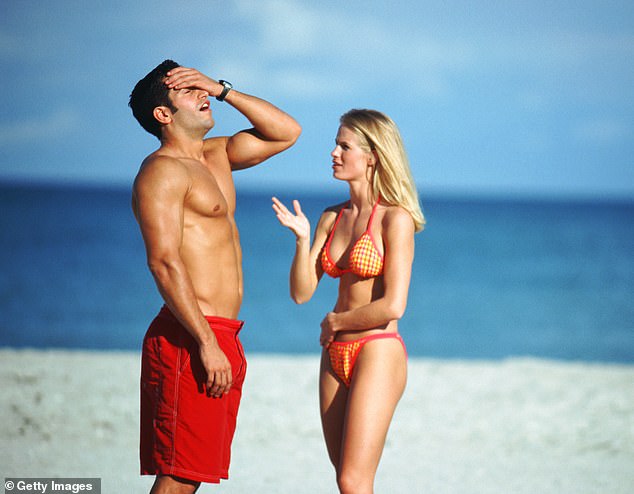 A man, from the US, sparked a debate over covering body hair when visiting beach clubs after revealing he had  an argument about it with his girlfriend while visiting Vegas (file image) 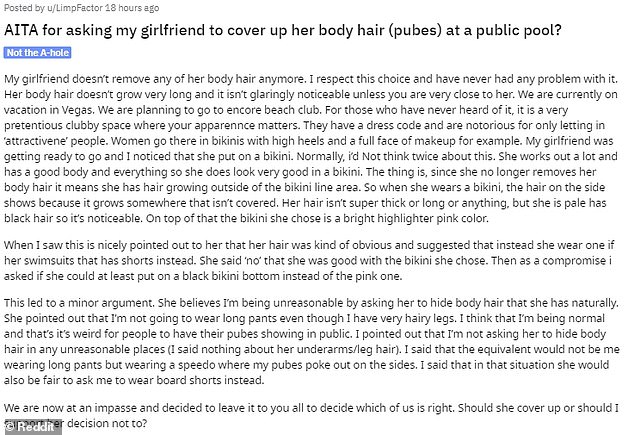 ‘She believes I’m being unreasonable by asking her to hide her body hair that she has naturally,’ he wrote. ‘She pointed out that I’m not going to wear long pants even though I have hairy legs.’

‘I think I’m being normal and that it’s weird for people to have their pubes showing in public. I pointed out that I’m not asking her to hide her body hair in any unreasonable places (I said nothing about her underarms/ leg hair).’

He continued: ‘I said that the equivalent would not be me wearing long pants but wearing a Speedo where my pubes poke on the sides. I said that in that situation she would also be fair to ask me to wear board shorts instead.’

The man in question then went onto ask the networking site whether they think his girlfriend should cover up, or whether he should support her decision not to.

A stream of initial responses agreed with the man for urging his girlfriend to hide her body hair.

‘NTA no one wants to see other people’s pubes and the shaving legs thing she brought up isn’t equivalent,’ penned one. ‘I think it is fine to ask her to cover up.’

Another added: ‘NTA pubes are unpleasant especially to people who you don’t know. All you did was ask her to put on a different swimsuit then she roasted your leg hair. Like that’s a different thing entirely.’

Others blasted the man for not supporting his girlfriend’s clothing choice and argued he’s projecting his own insecurities onto her.

‘YTA I bet it’s not even as noticeable as you’re describing,’ commented one. ‘It seems like you are super insecure about her not shaving, even though you say that you’re not.’

‘And you don’t know that they won’t let her in. I’ve never been to a club where the bouncers examine your crotch, even beach ones? Seems like this is your problem.’

Another wrote: ‘YTA you guys are a couple and are supposed to be a team. If she wants to have pubic hair don’t give a f*** what others think, you should respect that.’

‘Even if it some w***** Vegas club. Sounds like you care more about social norms than your girlfriend.’

A third added: ‘What is wrong with pubes? None of you seem to have an issue with armpit hair or leg hair – pubes are no different. what about women who can’t afford to shave or don’t have a choice?

‘They’re never allowed to go swimming? Don’t tell a woman how she can dress. There’s no line that needs to be drawn at pubes.’

‘It’s still telling someone what to do with their body. I’ve seen pubes hanging out the sides of swimsuits at the pool and yes it is a bit taboo but these are the taboos we should be breaking.’