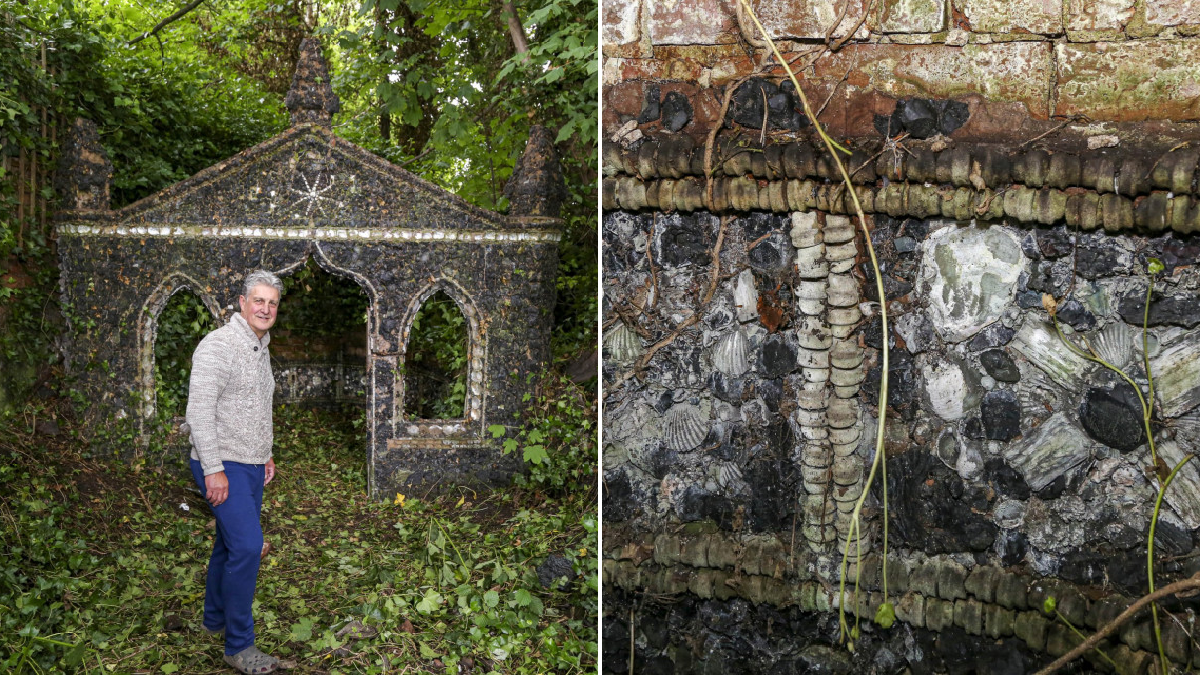 For over two decades, John Bostock had no idea that hidden beneath the wild section of his garden, there was a gothic folly dating back to the mid-1700s.

It was only as he prepared to move from his house in in Edgbaston, Birmingham and decided to tidy the section up that he found the 12ft ornate brick structure decorated with oyster shells, bones and teeth from cows and sheep.

John, 62, made the incredible discovery on Saturday and after speaking to experts, he believes it was something built by aristocrats to admire in the garden as part of a manor house which previously stood on the site.

Dad-of-five John, who lives with his wife Deb, 57, said: ‘We knew something was down there but not on this scale. I couldn’t believe the condition it was in.

‘We have been in the property for 25 years, but the garden had become a bit overgrown and it was covered in ivy.

‘I started to do some clearing and removed the ivy from it to uncover it then one thing led to another.

‘I realised it was something I had to showcase.

‘It was a bit of the garden we left to run wild and there is wildlife like badgers down there, it was left to nature until now.’

Unsure what to do with his find, John asked his daughter-in-law to put some photos on social media to see if they could get some more information.

He added: ‘All of sudden we could see the numbers going up and they were generating a lot of interest.

‘Then we had a couple of people come up to the house, one from the National Trust and a local historian.

‘As soon as they looked at it I knew it was something special because they were gobsmacked.

‘They said in all their years visiting historic gardens in Birmingham they had never seen anything like it.

‘They were amazed how well preserved it was on the outside and that some of the bricks look Georgian although the wood bits inside have been lost to time.

‘They estimate it is from the mid 1700s but they need to do more research because there is still a lot of stuff to uncover.

‘It was amazing to find on our doorstep and just a mile away from Birmingham city centre.

‘We think it is something that other people need to see and that it needs to be protected.’

John, who works in digital engagement, is selling the six bedroomed house and had already accepted an offer before realising the folly was on his half acre plot.

The grandfather-of-one added: ‘The house is up for sale and an offer is in, but I’m a man of my word.

‘I must admit it’s hard to leave it because we are attached to the property but the folly is going to a good home and the new owners will look after it I’m sure.

‘The experts are still researching to try to find out what it was for.

‘They’re saying like other follies it is quite likely it was a secluded area to go down to relax and maybe the lady of the manor would go down there for a bit of peace and quiet.

‘So there is a health and wellbeing element to it which is very timely in these days and people do seem relaxed in this sort of space.’

After all the interest from local historians, National Trust senior gardens adviser Pam Smith, was able to visit the building,

She said: ‘I’ve been in Birmingham 24 years and I think this is one of my best days.

‘It certainly was a highlight in my career and I’m pleased it has prompted such interest.

‘It just a privilege to be some of the early people to see it in this state, because sometimes when things get restored, they lost a bit of romanticism.

‘It is an opportunity to remind people that gardens are about pleasure and quirky tastes as much about the ’10 minute jobs in your garden’ – that always sound to me like a chore rather than a creative and satisfying hobby.

‘Follies such as this are a great place to sit and also show the playfulness of garden creators of the past.’

Pam plans to continue working with the family and any new owners to research more about the history.

‘In terms of what we know – it isn’t much but I am keen to help them find out more,’ she continued.

‘It seems to be constructed from oyster shells and bones and teeth from cows and sheep.

‘They used whatever was to hand from local slaughter houses and butchers, quite often it was sheep bones and sometime cows.

‘The teeth could be from cows but the bigger ones are probably sheep.

‘Our next steps will be to look at old maps, the house that was on the site before the current owner and find out about the family.

‘Such shell work could have been done as a hobby project for the ladies of the house.’

Garden historian Advolly Richmond added: ‘It’s obviously a shell house as opposed to a grotto, because grottos tend to be more subterranean.

‘It’s absolutely gorgeous inside. A lot of the teeth are still intact, and the bones are just pristine.’

A National Trust spokesperson said: ‘Even in the gardens of the National Trust we have many unanswered questions, many garden features, including follies, that are long lost and known about only in letters and sketches.

‘Follies and grottoes capture the imagination of all our gardeners and visitors, they were about pleasure, fun, secrecy and surprise.

‘We all long for that hideaway at the bottom of the garden and this discovery in an Edgbaston garden is a little less hidden than a week ago and has yet to reveal its secrets.

‘We look forward to helping to find out more and hope to help to ensure its survival for the future.’